This Should Not Happen In America 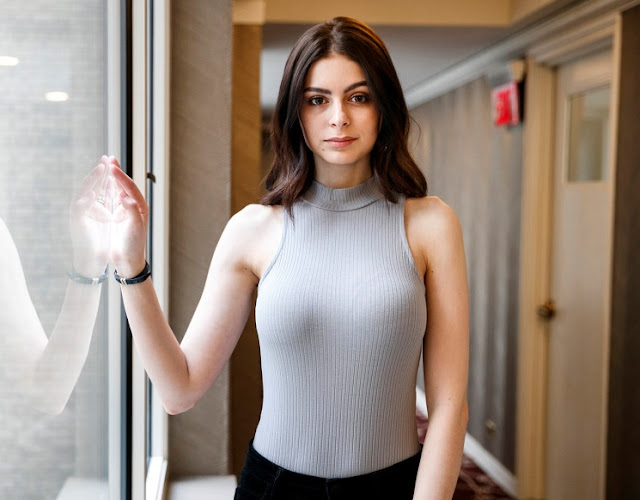 I just read about a 23 year old model who had to hide the fact that she was a Trump supporter out of fear of losing her job. She actually worked on the 2016 Trump Campaign, and hid that fact out of fear of reprisal.

The story, Model hid Trump support out of fear it would kill her career: ‘I couldn’t tell anyone’ was written by Dana Schuster for the New York Post.

According to the report:

"Elizabeth Pipko, a 23-year-old model who has appeared in Maxim, has kept a secret from her industry colleagues out of fear it could derail her career: She was a Donald Trump supporter and worked full-time on his 2016 presidential campaign. Here, the Midtown West resident tells Dana Schuster the lengths she went to hide her political affiliation from the liberal-leaning fashion world — and why she’s finally coming clean about loving Trump.

I decided to volunteer for Donald Trump’s presidential campaign in the spring of 2016. I never leaned liberal or conservative, but there was something about Trump — the way he spoke and his honesty — that had me convinced he was our next president. I worked in a call center in Trump Tower. Within eight weeks, I was hired as a national volunteer services coordinator for the data team and paid $4,000 a month.

It was clear from the start that, if I wanted to survive in modeling, I couldn’t tell anyone about my new job. Once, after working a 10-hour-day on the Trump campaign, I went to meet with my manager (who was not affiliated with a modeling agency). He and a colleague were enraged, screaming about how much they hate Trump. My manager kept saying how evil the people who work for him must be and that he would never work with anyone who supported him.

I was terrified they would find out that I was one of the so-called evil people. So I lied and told people I was coaching ice skating — I was a competitive figure skater for seven years — whenever I was really hard at work in Trump Tower. When I ran into a modeling friend on my way there one day, I immediately hid my badge and said I was running errands. But at every modeling job or meeting, the talk inevitably turned to Trump, and it was always high-stress.

At one shoot, the photographer came in wearing a black T-shirt with a gigantic red slash over Trump’s face. I was so unnerved, I could barely concentrate on the job at hand. Another time, in July 2016, Trump had said something controversial and it was all over the news. I was at Miami Swim Week for fashion shows, and the 15 other models were bashing him. I just sat in the corner and pretended to be on my phone. I didn’t want to be ostracized.

Once, when I was at Trump Tower, I ran into a big-time male model I knew from Wilhelmina, the agency that first signed me when I was 17. He was volunteering for the campaign, but he asked me not to tell anyone that I had seen him there — and I said the same.

After the race, because it was public record that I worked for the President, every time you started to type “Elizabeth Pipko” into Google’s search bar, Trump’s name would pop up alongside mine. A booker at my current agency, DAS, asked me about it, confused and a bit concerned. I told him had no idea! My brother created a program that would continuously search my name with other keywords to get “Trump” bumped out. But now that it’s been two years since the election, I don’t want to keep silent any longer. Even if that means saying goodbye to modeling forever."

The above story illustrates how truly horrible things have gotten right here in our United States. After reading this account, I really believe there's absolutely no where in America where this sort of thing should take place. Absolutely no where. No American citizen should ever feel terrified of losing a job or worse because they support a candidate who others don't.

What is going on today makes Americans look terrible in the eyes of the world. For example, Americans wearing red MAGA hats, hats that say "MAKE AMERICA GREAT AGAIN," are routinely attacked. A judge on the East Coast has ruled that wearing a MAGA hat is enough to refuse the wearer service. And as for Hollywood, today there are celebrities who are comparing wearing a red MAGA hat to the hoods worn by the Ku Klux Klan.

Image the idiocy of that for a minute. Imagine how we look to the world. How can anyone with even an ounce of intelligence compare wearing a red MAGA hat in support of the idea of making American more prosperous, improving our standard of living, putting all Americans back to work, to the hood worn by the Ku Klux Klan which was created by the Democratic Party to terrorize and lynch freed slaves and Republican administrators in the South during the Reconstruction Era?

Yes, yet they are saying that a red MAGA hat is no different than the hood worn by the KKK. Why would anyone say such a stupid thing? For what reason? Why would anyone pit American against American? What reason is there other then to create an atmosphere of hate and divisiveness.

As far as persecuting people for their political beliefs?

This is a resurgence of a past that most Americans believe would never take place here again. The last time America had this type of political litmus test was during the 1950s. It was during the McCarthy Era when Americans learned about "McCarthyism" which was the practice of making accusations of subversion or treason without proper regard for evidence.

Republican Senator Joseph McCarthy was a horrible individual who accused people who were ultimately "blacklisted" and in many cases lost their jobs even though there was no evidence of them doing anything wrong. Many Americans at the time had to sign loyalty oaths for employment. If they didn't, they were denied jobs. It's true. I had a friend who had to sign a loyalty oath when he became a teacher. It was a time when an employer could require applicants to sign a loyalty oath. If the person seeking the job didn't sign as required, then they simply didn't get the job.

This is something that we Americans see taking place in other countries, but not ours. I really believe that we see ourselves as above that sort of treatment of others.

Americans fought and died to liberate Europe and defeat Nazi Germany during World War II. Before our entering the war, during the 1930s, the people in Nazi Germany were so dedicated to Adolph Hitler that there were those who turned in others to the police -- because they were seen as "less loyal" to the Nazi Party. Is this the new Democratic Party? Are people less loyal to the Democrat Party going to lose their livelihood or worse? Remember, President Obama used the IRS to investigate and audit Americans who were not his supporter.

In Nazi Germany, those opposing the Nazi Party weren't the only persecuted. At the time, German Jews were also being targeted. In many instances, if they could, it was known that some in Nazi Germany hid the fact that they were Jewish just to avoid persecution.

Is this the new America? Is America now a place where if you are not a Trump hater, not a Democrat, not a Liberal, not a supporter of Hillary, Pelosi, Schumer, Warren, or others of that political party, then you can lose your job if that's found out? Is this what we have become? If we don't all adhere to the political party in favor, then we're screwed? Is that it? Have we become a nation where a complete subservience to the Democratic Party is required, or you risk everything that you may have worked for?

This is bigger than model Elizabeth Pipko. It speaks to Union members, tradesmen and women, police officers, store clerks, truck drivers, teachers, and an array of others in thousands of occupations.

We, the American people, should not have to be made to take some sort of loyalty oath to the Democratic Party or the Republican Party. We should no have to pretend we hate President Trump for the sake of appeasing an employer. We should not be forced to pretend that we support the candidate our boss supports in order to keep a job.

While this is not exactly on the lines of having to do with the Old West, cowboys, horses, and so on that I usually write about. It does have to do with our history and it goes to the heart of our American freedoms. No one should be worried about hiding their preferences for or against a political party or candidate out of fear of reprisals. This viciousness really has to stop. This sickness needs to end.