In my article, The Late 1800s - U.S. Military Action Abroad, I mention: "While it is true that the Navy and Marine Corps was key to conflicts around the world, in November of 1866, the U.S. Army was deployed to Mexico to protect American residents along our Southern Border. Or rather, a unit under General Sedgwick deployed itself to defend the U.S. - Mexico border.

It's true, U.S. Army General Sedgwick and 100 Soldiers left Brownsville Texas and crossed the Rio Grande to obtain the surrender of the city of Matamoras where outlaws had ruled the town. They did this without orders from Washington. After 3 days, and a quick campaign to rid the border of problems, General Sedgwick was ordered by the Chiefs in Washington to withdraw. Later, his act was repudiated by the President as an act of an over-zealous Officer. But yes, it took care of the problem for a while!"

Well, I've been taken to task over this. As my reader put it, "General Sedgwick died in 1864 and subsequently couldn't have been in Mexico in 1866."

Union Army General John Sedgwick was a soldier's soldier. He was born on September 13, 1813. In 1860, Col. Sedgwick was the commander of an expedition to establish a new fort on the Platte River in present day Colorado. It is said that the remote location had no railhead nearby. This meant that all of their supplies had to be either packed in by mules and horses, before eventually coming in by wagons from riverboats. Before the supplies started to arrive, it's said hunger and starvation was looking them in the face. While they hunted for what game there was, they built shelters to brave that winter. It was an experience that gave him a reputation of staying calm in a bad situation.

During the Civil War, he missed the First Battle of Bull Run because he was recovering from cholera. But soon after that, he was commanding a brigade and then a division. At the Battle of Antietam, his commander was General Sumner. It was there that General Sedgwick's division was sent in mass to engage Confederate forces under General Thomas J. "Stonewall" Jackson. Confederates were on three sides and General Sedgwick's troops were slaughtered.

After all was said and done, he lost almost half of his men. And he was shot three times, once in the wrist, in the leg, and in the shoulder. The huge loss of Union troops, and the wounds inflicted upon General Sedgwick were a result of a superior officer foolishly ordering his unit into a battle without proper reconnaissance.

General John Sedgwick was killed by a sniper, what was known as a sharpshooter back in those days. That happened at the Battle of Spotsylvania Court House on May 9, 1864. He is well remembered for his  last words. When told he saw his men dodging incoming rounds, he said, "Why are you dodging like this? They couldn't hit an elephant at this distance." Those were his last words.

The Whitworth rifle was an English-made muzzle-loading single-shot rifled musket. It was a .45 caliber rifled musket that had an effective range from 800 to 1,000 yards. It's maximum range was said to be 1,500 yards. A good rifleman could get 2 to 3 rounds off in a minute. As is the case, a sharpshooter takes longer than that to do their handy work. Such is life for a slow moving sniper who wants to place his shot exactly where he wants it to go.


As a point of interest, because of it's excellent long range accuracy when used with a scope, the Whitworth rifle is considered the world's first sniper rifle. I find it interesting that General Sedgwick and General John F. Reynolds, who was killed on July 1st, 1863, at Gettysburg, are two of the four highest-ranking Union soldiers to be killed in the Civil War. Both Union Generals Sedgwick and Reynolds were killed by Confederate sharpshooters using Whitworth rifles.

On the last day of his life, General Sedgwick's chief of staff was Col. Martin T. McMahon. He reported the General's death, "I remember distinctly that I commenced to say 'General, they are firing explosive bullets.' when his face turned slowly to me, and blood spurting from his left cheek under the eye in a steady stream, brought to me the first knowledge of our great disaster. He fell in my direction and I was so close to him that my effort to support him failed, and I went to the ground with him."

General Sedgwick was fondly referred to by his troops as "Uncle John". It's said that Gen. Ulysses S. Grant couldn't accept that he was dead. In fact, he is said to have repeatedly asked, "Is he really dead?" General Grant told his staff that the loss of General Sedgwick was worse than than that of an entire division.

Confederate Robert E. Lee who served with his old friend before the war is said to have asked to be alone after hearing of his death. Another old friend was Union General George G. Meade. He openly wept at the news of his death. Yes, General John Sedgwick sounds like an outstanding officer.

There are a few statues of him here and there. One monument of General Sedgwick is at the United States Military Academy (USMA), also known as West Point. There is a legend at the academy that says, a cadet who spins the rowels of the spurs on the boots of General Sedgwick's statue at midnight while wearing full parade dress gray over white uniform under arms will have good luck on his or her final exam. 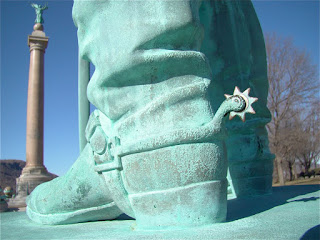 It's true. tradition says a cadet has to visit the statue and spin the General's spur rowels at the stroke of midnight. The cadet then has to run like hell back to the barracks as fast as he or she can. Again, according to legend, if General Sedgwick's ghost catches them, then they will fail the exam. If not, the cadet will pass the exam and the course.

While being out of their rooms after midnight is definitely against West Point regulations, it's also said that such violations have been known to be overlooked for the sake of tradition. It would be interesting to know how many cadets have actually tried doing this. Or more importantly, it would be interesting to find out how many felt that they needed to do this to get through a course.

Now to the original question of how could he die in 1864 and lead 100 U.S. Army troops to invade and occupy a small city across our Southern border in 1866?

Well, he can't. That's because the General Sedgwick who led those 100 troops to invade that town on his own was not General John Sedgwick but was actually General Thomas D. Sedgwick. Yes, a second General Sedgwick.

As for General Thomas D. Sedgwick, while I can't find almost anything about him, I did find that he did in fact take 100 of his troops into Mexico in November of 1866 because of attacks on American citizens on the border.

Because it was an embarrassment to the United States government, as he did in fact occupy the city of Matamoras for 3 days, I can't help but wonder if he was still a General after returning to this side of the river. The U.S. Army doesn't appreciate their commanders using our troops for such unauthorized actions.