Way up north at the eastern border of New York state sits the small town of 2,367 residents. At least that was the last count per the 2010 Census. It's name is Town Line. And from what I'm told, the small town is actually part of the Buffalo-Niagara Falls Metropolitan Statistical Area not too far from Canada.


Located in Erie County in the state of New York, it sits right on the boundary between the towns of Lancaster, Pennsylvania, and Alden. The Town Line Fire Department is located on the Lancaster side of the town. The department also serves parts of Lancaster and Alden.

There is another small community named Town Line Station about a mile north of Town Line.

So now you're asking, what could be so special about such a small town in upper New York state to merit being written about in my blog which usually deals with the Old West? Well, the town has bragging rights to be the last town to rejoin the Union after the Civil War. Yes, a town in New York state was the last holdout.

According to the information that was sent to me, the town did in fact secede from the United States in 1861. That was when 125 men attended a meeting in a schoolhouse there to put the question of secession to a vote. Why some voted to secede is a mystery that no one knows the answer to. But believe it or not, their vote for secession passed 85 to 40. And with that, a resolution to secede from the United States was passed.

From what I can tell, the vote really was not needed because Town Line was an unincorporated township and the vote had no legal effect on anything. In fact, since no one really knew where the 4.6 square mile town started or ended -- some think it was all nonsense. Besides, as for joining the Confederacy, that didn't happen because the Confederacy never did recognize the town's secession.

That's not to say that some of those townsfolk, who were as Yankee as the day is long, didn't cross the Mason–Dixon line and head south to enlist in the Army of Northern Virginia. Five residents did exactly that. Imagine the guys in that Southern Army unit finding out that five of their comrades were New York Yankees?

I can only wonder what their Sergeant was thinking when hearing their story about leaving New York and traveling to Virginia to fight their neighbors. Of course, it's said that several of the men who made up the German-American community in and around Town Line left for Canada. And while the five went to Virginia, twenty of Town Line's residents joined the Union Army.

So now, why are they the "last" town to rejoin the Union? Well, believe it or not, after the residents voted 90 to 23 to rescind the old resolution to secede, they officially "rejoined the Union" on January 24, 1946. Yes, 1946. At the end of World War II.

It was a big deal. It was in the newspapers. There was a lot of fanfare to the occasion. The town of Town Line held such a huge ceremony to "rejoin the Union," that it got a Hollywood celebrity to come out and oversee the vote. It's true. A-list Hollywood actor Cesar Romero was on hand for the celebration.

So now, that's the story of the last holdout of the Confederate States of America. Yes, the town of Town Line, New York, has the bragging rights for being the last of the last. That's especially true since they weren't officially "re-admitted" into the Union until 1946.

As for calling the folks there Yankees? Well, it depends who you're talking to. For example, Town Line resident Brandon Adkins has this to say about that, "One guy, he was calling me a Yankee. And I says, 'Excuse me, I’m from Town Line, I'm a Confederate. We were Confederates for the longest time.' He said, 'If that's true I'll kiss your rear end in front of everybody to see.' He looked it up and I guess he believes me now that we were the last of the Rebels."

No telling if that stranger ever kissed Adkins' rear end! 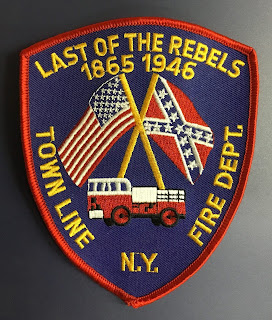 Though the town of Town Line is only a few miles from the Canadian border, there are folks there with "Confederate Pride." For example, it's said that the local fire station used to have their personnel wear patches that read "Last of the Rebels 1865–1946." With the Confederate flag and all.

I didn't go hunting for this information. As with some articles, big and small, I was sent the information pertaining to this town by a long time reader. The folks up there still display the Confederate flag and wear their Confederate gray uniforms on holidays like Memorial Day.

No one really knows the reason that the vote was taken in the first place, especially since Northerners overwhelmingly supported President Abraham Lincoln. Some say it could have been President Lincoln's call for 75,000 troops that provoked the vote. We do know that much of the German farming community refused to comply when the call went out for troops As stated before, some of them even left for Canada.

So why wait until 1946 to "officially re-join the Union"? Well, the United States, us, we Americans, just won World War II and there was a feeling of patriotism that accompanied our victory. Some believe that that's what pushed Town Line residents to join the team instead of sit on the bench.

While I laughed when first reading about this, I have to say that I was surprised to find out that this was a big deal. This really turned into a big deal. So much so, that a special committee of townsfolk were formed and someone wrote President Harry Truman about the situation.

To everyone's surprise, President Truman responded, telling them, "Why don't you run down the fattest calf in Erie County, barbecue it and serve it with fix'ins, and sort out your problems."

That's what pushed the folks there to finally put it to a vote. So now you're saying that that must have been the end of it? Well, incredibly, the first vote held on December of 1945 came up short. It failed to get folks to leave the Confederacy which had not been around since 1865.

Then the situation became national news and the town became sort of an embarrassment. That's when the second vote passed on January 26, 1946. With that, the Confederate flag which had flown for 85 years over the fire station was lowered and local residents took the Oath of Allegiance to the United States while cameras snapped away.

Just as with their vote to secede in 1861, no one will ever know why a few still voted against re-joining the Union in 1946. It'll forever be a mystery.