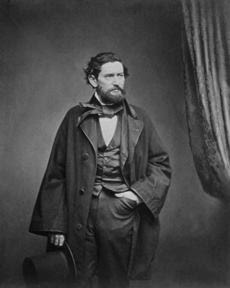 To begin this series on John Coffee "Capt. Jack" Hays, let's do something different and start by taking a look at his obituary as it appeared in The El Paso Daily Times, El Paso, Texas, May 2, 1883:

One by one the old veterans of the Mexican war cross the silent river, and are mustered into the ranks of the immortal army. The last one to leave us was John Coffee Hays, better known as "Col. Jack Hays" who died at his residence near Piedmont, Alameda County, Califo, April 21st.

Col. Hays was a native of Tennessee, and 66 years of age. He had been ill and gradually failing for a long time, and passed away calmly, leaving to mourn his loss a widow, son and daughter, as well as hosts of friends in all parts of the country.

The funeral services were held at St. John's Episcopal church, Oakland, and were most impressive in their character, being conducted by rev. Dr. Akerly, of Oakwood, and Rev. Dr. Platt, of Rochester, NY

The music was rendered by the choir of Trinity church, San Francisco. The floral offerings were very elegant the most beautiful being a large star of white camellias representing the "Lone Star of Texas."  Another lovely offering was a tripod of three sabres, their hilts resting downward the blades entwined with white roses.

After the immense assembly had viewed the features of the dead hero for the last time in this world, the procession, composed of the "Mexican War Veterans" and "California Pioneers" with the Oakland Light Cavalry as guard of honor, formed in line and marched down to the tap of muffled drums to Mountain View cemetery.

The last prayers were read, the remains were solemnly committed to the ground the three volleys were fired, and the Veterans marched quietly away, leaving their gallant comrade in silent slumber till the silvery notes of the Resurrection bugle sound a glorious awakening.

Dear to the heart of every Texas is the memory of Col Jack Hays, and his name is familiar to every American school boy who reads the history of his country. Well do I remember when a boy, reading accounts of the valorous exploits of Col. Hays and his "Texan Rangers" little thinking that years afterward and thousands of miles from my native home it would be my privilege to attend his funeral.

The struggle for Texan Independence, and the storming of Monterey attest to his bravery as a soldier, while his many deeds of charity and boundless generosity exhibit his Christian spirit.
He came to California in '49 and was the first sheriff of San Francisco, his appearance during the dark days of the vigilance committee being a most remarkable one.

By judicious management he acquired considerable wealth, and for a number of years lived in retirement at "Fernwood," his beautiful residence. In politics he was an active democrat, and was a delegate to the National Democratic Convention held at St. Louis.

So what makes others write such a wonderful tribute? Well, fact is John Coffee Hays was a man who garnered a great deal of admiration and respect during his life. He was not like many Old West legends who were all brag and tall tale. He was not some sort of Hollywood creation.

Hollywood has skirted the facts about the lives of Wyatt Earp, Doc Holliday, and Wild Bill Hickok for almost a hundred years. And frankly, they have done us all a disservice by refusing to tell the true story of their lives. Of course, they can't fully be blamed for taking the bait that others have bit on, especially since many Old West figures themselves actually helped to fabricate their own reputations through lies and unfounded tales of skill and bravery.

That doesn't apply to John Coffee Hays because the details of his deeds are factual and above reproach. Fact is there is no need to deal in exaggerations, conjecture, falsehoods, or out and out lies when looking at his life. He is one of our Old West heroes who really deserves every bit of his well-known reputation. It is very clear why he was held in such high esteem during his life.

Among his fellow Texas Rangers, he was known as "Captain Jack." There was never a need to print fake stories that couldn't be corroborated, witnessed, or sworn to, when it cane to the heroic acts and deeds of Captain Jack. To say his peers admired and respected him for his bravery, courage, fighting skills, and knowledge of warfare would be an understatement.

Fact is, he really did join in the battle for Texas Independence, lead men into battle, trained and inspired other Texas Rangers, fought the Comanche single-handed and lived through it, used pistols in warfare to their maximum potential, actually went to war with Mexico, served as the first sheriff of that wicked city on the Barbary Coast, dealt with the largest vigilante group in it's day, and much more.

John Coffee Hays was the real deal, and facts about his life supersede any of the unsubstantiated myths that others depend on. But because my small blog cannot properly list everything about him in one sitting, I'll try to break down his deeds during the next few posts.

And hopefully, I can do this great American the justice that he certainly deserves.