Let's Talk About Feral Hogs -- They Should Be Shot 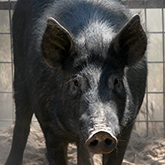 Feral hogs are not native to the Americas. They were first brought to the United States in the 1500s by early explorers and settlers as a source of food. Free-range livestock management practices and escapes from enclosures led to the first establishment of feral swine populations within the United States.

In the 1900s, the Eurasian or Russian wild boar was introduced into parts of the United States for the purpose of sport hunting. Today, feral swine are a combination of escaped domestic pigs, Eurasian wild boars, and hybrids of the two. Feral swine have been reported in at least 35 states.

Their population is estimated at over 6 million and is rapidly expanding. Range expansion over the last few decades is due to a variety of factors including their adaptability to a variety of climates and conditions, translocation by humans, and a lack of natural predators.

Feral swine cause major damage to property, agriculture (crops and livestock), native species and ecosystems, and cultural and historic resources. In fact, this invasive species costs the United States an estimated $1.5 billion each year in damages and control costs. Feral swine also threaten the health of people, wildlife, pets, and other domestic animals. As feral swine populations continue to expand across the country, these damages, costs, and risks will only keep rising.

As for crops, feral swine damage crops by consuming them or by their rooting, trampling, and wallowing behaviors. Field crops commonly targeted by feral swine include sugar cane, corn, grain sorghum, soy beans, wheat, oats, peanuts, and rice; however, they will eat almost any crop. Farmers may also experience damage to vegetable and fruit crops such as lettuce, spinach, melons, and pumpkins.

Feral swine damage pasture grasses, killing desired plant species and often encouraging the growth of undesired weed species. Feral swine will turn over sod and pasture, by rooting, to expose the tender roots of plants, grubs, and invertebrates which ultimately destroys the pasture. The ruts and rises this behavior creates can make it challenging, even impossible, for a farmer to drive a tractor over the field to harvest hay.

When it comes to livestock? Feral swine can transmit pathogens to livestock, which may result in financial losses to livestock producers due to lower productivity, veterinary costs, or even mortality. They are also capable of killing young calves and lambs, and vulnerable adult animals during the birthing process. Feral swine may also eat or contaminate livestock feed, mineral supplements, and/or water sources.

In regards to horticulture, feral swine can devastate orchards and vineyards by consuming fruit, berries, citrus, grapes, and nuts. Feral swine can destroy saplings and vines by roughly rubbing on the plants with their bodies (which they do to remove parasites from their skin) and can also damage large trees by scraping bark off with their tusks to mark territory, creating an entry point for diseases on the tree. Their rooting can severely damage, or even kill, saplings, shrubs and vines directly or by facilitating the spread of soil-based fungal diseases. Feral swine can also break irrigation lines, rip or tear nets, trellises, drying racks, and other specialized structures and equipment associated with orchards and vineyards.

Feral hogs are known to carry at least 30 viral and bacterial diseases and nearly 40 parasites that can be transmitted to humans, pets, livestock, and other wildlife.

Harmful organisms and pathogens, carried by feral swine, which can infect humans include diseases such as leptospirosis, toxoplasmosis, brucellosis, tularemia, trichinellosis, swine influenza, salmonella, hepatitis and pathogenic E. coli. If you feel ill after coming into contact with or consuming feral swine meat, contact your physician or health department immediately.

Livestock, pets, and other domestic animals can also be susceptible to many pathogens carried by feral swine. These pathogens can be spread in many ways, such as through direct contact with feral swine or their scat, by using feeding and watering containers that have been contaminated by feral swine, or by eating raw, infected feral swine meat, organs, or other tissues.

Watch for signs of illness (fever, lethargy, swelling in joints, respiratory, and reproductive problems) in your pets and contact your veterinarian immediately if signs of illness are observed. Caution should be taken around pets and livestock that are suspected to be ill from recent contact with feral swine since some diseases can be transmitted to other animals and possibly humans.

Other risks posed by feral swine to people include attacks on individuals or collisions with vehicles and aircraft. Feral swine have been aggressive towards and even attacked farmers, golfers, hikers, and picnickers. Aggression can be increased when they associate people with food because of handouts and improper waste disposal.

Feral swine can destroy lawns, gardens, ornamental plantings, and trees through rooting. They can also damage landscaping, fences, and other structures reducing the aesthetic value of the property.

Although most often associated with rural areas, feral swine are increasingly causing damage to residential property, golf courses, cemeteries, beaches, and parks. Furthermore, feral swine can cause considerable damage when involved in vehicle collisions such as with cars, motorcycles, and aircraft.
Damage to natural resources.

Feral hogs pollute and degrade water quality, reduce forest regeneration, and kill or displace many kinds of native wildlife. They compete with native wildlife for multiple resources, specifically food, habitat, and water. Feral swine diets overlap with those of native wildlife, such as bear, deer, and turkey, which results in competition for important and limited natural food supplies. Feral swine activity will often deter other species from living in an area, resulting in competition over prime habitat. Feral swine wallow in mud to maintain proper body temperature which can be particularly problematic during dry seasons when they monopolize and contaminate limited water sources.

Feral hogs also prey directly on the nests, eggs, and young of native ground nesting birds and reptiles, including threatened or endangered species. Game birds such as wild turkeys, grouse, and quail can also be impacted. Feral swine have even been documented killing and eating deer fawns, and actively hunting small mammals, frogs, lizards, and snakes.

Feral swine wallows are prime mosquito habitat which contributes to the prevalence of various mosquito-borne diseases. Wallows can also be a place of transmission for bacteria and parasites from feral swine to native wildlife that come to drink.

Forest regeneration is harmed because feral swine can alter the understory growth of forests through rooting and foraging, ultimately shifting the tree species diversity and density in a forest by interfering with seed dispersal since they are huge consumers of mast crops (i.e., acorns, hickory nuts, beech nuts, and tupelo). Consumption of mast, not only depletes food sources for native wildlife such as deer and turkey, but this behavior can also alter the forest composition by decreasing the number of large seed-producing trees.

Feral swine rooting, wallowing and feeding behaviors can damage the appearance and integrity of cultural and historical resources

Feral hogs  can cause extensive damage to areas of cultural and historic value including national parks, historic sites, tribal sacred sites, burial grounds, cemeteries, and archaeological sites or digs. This damage can affect the significance and integrity of historic properties through physical disturbance to structures, vegetation, and soils. Feral swine have the potential to destroy artifacts and history which can never be recovered or replaced.

Most all of the information above was taken directly from the United States Department of Agriculture website.

The USDA did not mention how well-meaning people screw with the natural balance of ecosystems when they purposely introduce an invasive species. They also didn't mention how others have to deal with the havoc they wreak on native species. In many case, the willingness of some to introduce invasive animal species like feral swine actually caused the extinction of plants and animals while putting human health and economies at risk.

And while the USDA states, "Range expansion over the last few decades is due to a variety of factors including their adaptability to a variety of climates and conditions, translocation by humans, and a lack of natural predators" -- they do not mention the efforts made by wealthy gun-control advocates to eliminate hunting all in an effort to ban guns in the United States. Gun-control and the efforts made to eliminate hunting has enabled the feral swine population explosion in recent years.

And make no mistake about it, feral swine are an invasive species that's well established in many states. Contrary to the USDA's claim of "Feral swine have been reported in at least 35 states" some say the number is more like 43 states. And as for places like Texas, Louisiana, Arkansas, Alabama, Florida, Georgia, North and South Carolina, people in those states know full well that feral hogs are not simply farm pigs gone wild. They have razor-sharp teeth, curled tusks, and are not afraid of attacking humans.

These are not small animals. Adult feral hogs weigh between 75 and 250 pounds on average, but some can get twice as large. This invasive species can reach 3 feet in height and 5 feet in length. Typically, males (boars) are larger than females (sows).

They are muscular and strong, and can run up to 30 miles per hour. Like deer and domestic pigs, feral swine have cloven hooves. Although feral swine tracks look similar to deer tracks, they have a blunter tipped toe, and their tracks have a square shape, compared to the pointed heart-shaped tracks of deer.

Feral hogs breed year-round and can have up to two litters of 4 to 12 piglets per year. Since they become sexually mature at 6 to 8 months of age, feral hog populations have the potential to double in size every four months. That's why population management is so important.

Feral swine generally travel in family groups, called sounders, composed of two or more adult sows and their young. Sounders can vary in size, including a few individuals to as many as 30 members. Adult boars usually live alone or in bachelor groups, only joining a sounder to breed. Because they are usually active at night, feral swine are less frequently seen during daylight hours, particularly in hot, humid climates.

Non-lethal management techniques can be effective for limiting disease transmission, crop damage, and livestock loss. But make no mistake about it, lethal techniques are a more effective means for limiting population growth and stopping the damage that they create. In other words, they should be shot!

It is recommended that prior to beginning any control program, that one should check federal, state, and local laws and regulations regarding hunting, use of firearms, and traps, snares, and such. As for trying to kill them off, hunters in most states are permitted to shoot them on sight.