Capt. Jack's Pistols
When we left off on part two, we were talking about how Capt. Jack Hays was a great leader of the Texas Rangers while fighting Indians. His excellence as a leader would follow him throughout his life. One of the things that made him a great leader was his emphasis on good training for his men. Besides holding classes on tactics of the Comanche and survival skills, he was known to have extensively trained his men to ride, shoot, and move as a single cohesive fighting force.

For me, I remember my days in the Marine Corps as an Infantryman. Yes, believe it or not, Rifleman (0311) was my "occupational skill" in the Corps. Among the aspects of my MOS that was emphasized during our training was our mission as a Marine Corps rifle squad. Our mission was to "locate, close with and destroy the enemy by fire and maneuver, or repel an enemy's assault by fire and close combat." Looking at things objectively, that seemed to be the mission Capt. Jack trained his men to do when he created a light mobile cavalry unit ready to take on an enemy of superior numbers.

As for those who say, the Indians should not have been a problem since we had better technology, weaponry, and tactics, keep in mind that the Comanche were not uneducated warriors. The Comanche were battle savvy and combat hardened. Over the years, they fought the Spanish, French, Mexicans, Texians, and the Americans. Their territory known as "Comancheria" was vast and the Comanche were feared by all including other tribes. The Comanche knew their terrain, had a much better knowledge of their natural resources such as locations of water, and their strategy of fighting was merciless and brutal. There was a reason they were known as the "Lords of the Plains."

This was who Capt. Jack and the Texas Rangers were up against. And looking at his orders to "Crowd them! Powder-burn them," one can only imagine the horrific close combat fighting that involved. To do so and come out alive takes discipline, a tremendous amount of courage, and knowing how to use the weapons that you have. It was known that the Rangers would charge into surprised Comanche, and open fire, but only after maneuvering into an advantageous position. They weren't stupid and knew Indian tactics. Because of their superior firepower, as the Comanche would flee, the Rangers were known to keep up the fight even when they were pursuing a larger retreating force.

In the case of Walker's Creek, that was that case of over 80 Comanche against 15 Rangers. Remember, besides himself, he only had 14 troops with him. Since it's believed that the Rangers had practiced unloading spent cylinders and replacing them with pre-loaded extra cylinders while on horseback, they were able to pour fire on the retreating Indians. at was the reason for the superior firepower that they poured out that day.

As for courage under fire, it's said that at one point in the fight Comanche War Chief Yellow Wolf tried to rally his men to launch a counter-attack, but Capt. Jack saw what was taking place. He shouted, "Any man with a load left, kill that Chief!" And with that, Ranger Robert Gillespie is said to have instinctively closed with Chief Yellow Wolf and fired. Gillespie's round struck the Chief in the head.

The Colt Paterson and then later the Colt Walker in the hands of a Texas Ranger became "The Great Equalizer." It is said that using his Paterson Colts that he purchased in 1843, John Coffee Hays fought in many uneven battles. The Paterson Colt is a .36 caliber five-shot pistol with an effective range of 65 yards.

While the U.S. Army considered the Paterson to "fragile and prone to malfunction" to use, the Republic of Texas put them to good use when Capt. Jack armed his entire company of Texas Rangers with surplus pistols from the defunct Texas Navy. The Paterson Colts that were still serviceable were issued to Texas Rangers, each man being issued two or three revolvers.

Captain Jack Hays and Ranger Samuel Walker became major supporters of Colt revolvers. In fact, it was Walker's experiences at Walker's Creek under Captain Jack that taught him the value of a multi-shot pistol. Later, Walker met Samuel Colt and proposed improvements, including a stationary trigger and guard. Colt increased the number of rounds to six, beefed it up to .44 caliber ball round, and credited Walker with the improvements. The new six-shot revolver was named the Walker Colt. Walker himself observed that the Walker revolver was "as effective as a common rifle at 100 yards and superior to a musket even at 200."

The Colt Walker Dragon pistol is a .44 caliber six-shot pistol with an effective range of 100 yards. Sam Colt himself presented John Coffee "Capt. Jack" Hays with Colt Walker Dragoon Pistol in December of 1847.

While I have no idea what ever happened to Capt. Jack's Colt Paterson revolvers, the Walker Colts that he used went up for auction in 2017. In fact, on December 10, 2017, Heritage Auctions listed a number of Capt. Jack's possessions for auction. Among those items was his Colt Civilian Model Walker Revolver and his Texas Model Walker Transition Dragoon Single Action Revolver. 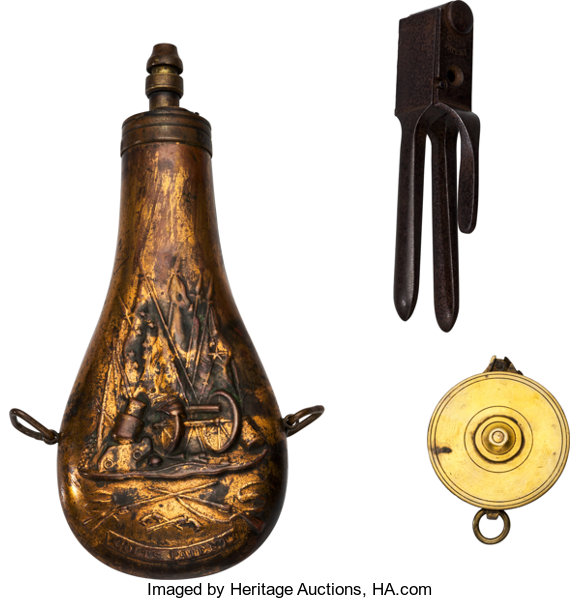 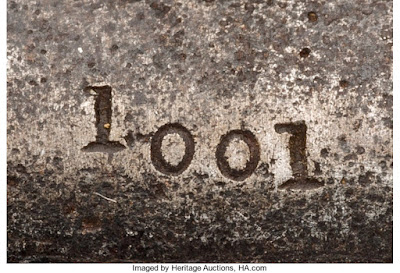 The second pistol up for auction was his Texas Model Walker Dragoon. Colt manufactured and assembled the shorter, lighter "Transition Dragoons" in Hartford, Connecticut, whereas the Paterson models were manufactured in Paterson, New Jersey -- thus their name Paterson. Capt. Jack's pistol has the word "Texas" with the five-point star representing Texian independence on it.

According to the auction information: "Cased Colt Presentation Whitneyville Hartford Transition Dragoon Revolver serial number 1166 inscribed, 'Col. John C. Hays Presented By Samuel Colt'... The engraved script presentation to Col. John C. Hays on the revolver's backstrap and case lid... This is the only known Transition Dragoon casing and unsurprisingly, has some unique characteristics. The casing is constructed of mahogany with dovetailed corners and glazed with a faux rosewood finish. This surface texture was a common technique in the nineteenth century and was used to simulate expensive rosewood veneer on all types of furniture objects. The interior of the partition casing is lined with a faded red fabric similar to later Colt casings and perfectly fitted to the revolver and accessories with no signs of alteration." 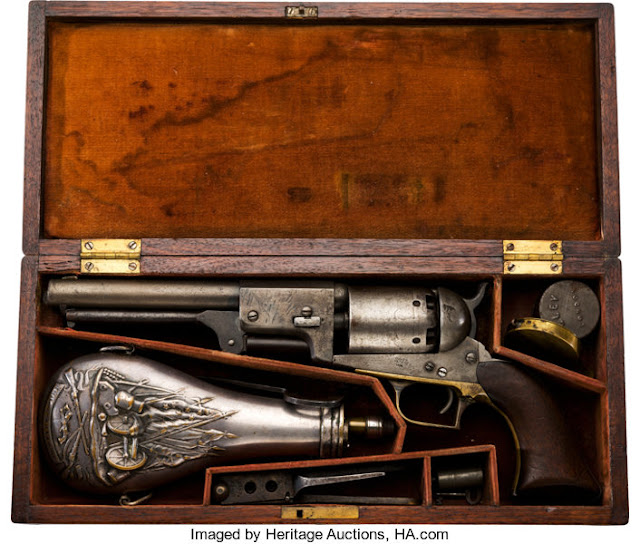 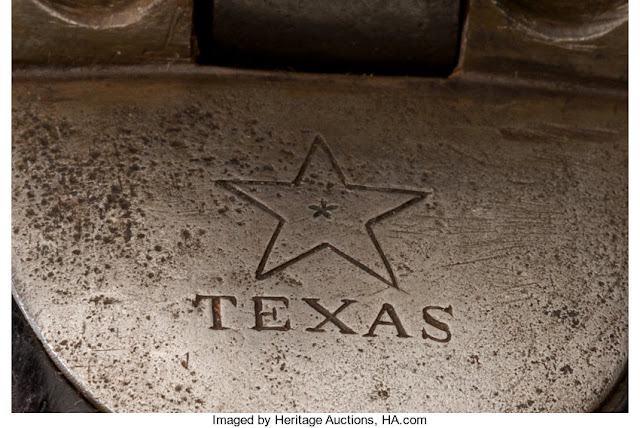 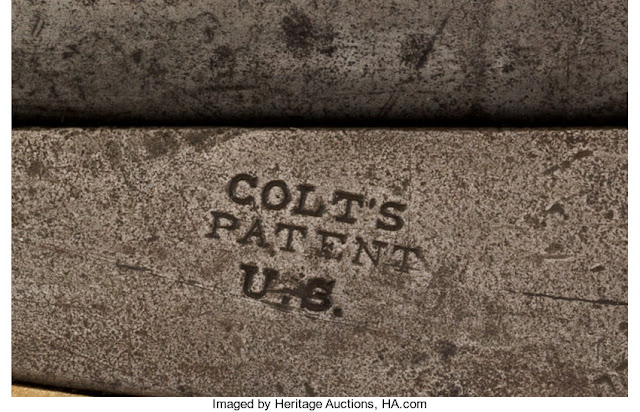 It was presented to Capt. Jack in December of 1847 in an inscribed wooden case. These pistols are believed to have been carried by Capt. Jack in the Mexican-American War, as San Francisco County Sheriff, and at Pyramid Lake.

When the auction in 2017 ended, his presentation pistol alone is said to have earned over $320,000. And by the way, firearms experts believe his pistol has seen much use and is the earliest known engraved Sam Colt presentation gun. Imagine that.