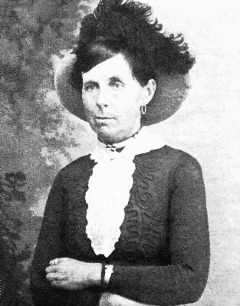 Her name was Myra Maybelle Shirley Starr, but most know her simply as Belle Starr. To folks in Texas in the mid-1880s, she was also known as "The Bandit Queen" celebrated in several popular publications both newspapers and dime novels of the time.
She was born on a farm near Carthage, Missouri, on February 5th, 1848. Myra Maybelle (or Belle) Shirley was one of six children and the only daughter of John and Elizabeth Hatfield Shirley. It is speculated that May, as her family called her, might have attended Carthage Female Academy before going to Cravensa which was a private school also located in Carthage.
It's believed her father John Shirley was a prosperous innkeeper, landowner, and slaveholder. In 1861 when the Civil War started, the Shirley family lived in Carthage. Even before the start of the Civil War, sympathizers for the Southern cause were widespread there. It's said that by the time the war broke out, supporters of Confederate irregulars such as the raider William Clarke Quantrill raiders were also commonplace. That might be why it's said the Shirley family was pleased when their oldest son, John joined a group of bushwhackers who took part in the bloody reprisals taking place at the Missouri-Kansas border.
I find it interesting that bushwhackers were named after a common saying about cowards during that time, "Some men are bad -- behind a bush!"
By 1864, the city of Carthage had been burned to the ground and many families fled to Scyene, Texas, near Dallas. It was in Scyene in July of 1866 that Cole, Jim, Bob, and John Younger, along with Frank and Jesse James are said to have used the Shirley home as a hideout. All were known Missouri killers who rode with Quantrill, but that didn't matter to the Shirley family.
As for Belle having a supposed love affair with Cole Younger? That's the sort of thing that's made to order for Hollywood because no one knows if there is any truth to that myth. While some have claimed that Belle's daughter Rosie Lee was also Cole Younger's daughter. Rosie Lee was born in 1868.
Just because some legends say Rosie Lee was also called Pearl Younger, that does not mean that there's any truth to her being Cole Younger's child. Cole himself denied it when asked about it. And since Belle married a bandit by the name of Jim Reed on November 1, 1866, it's believed that Reed is her daughter's father.
Jim Reed is how Belle first met Cherokee outlaw Tom Starr who was the brother of outlaw Sam Starr. Belle and Jim lived in Indian Territory at Starr's home. It was when Reed was charged with murder in Indian Territory that he and Belle, along with their daughter, is said to have fled to Los Angeles, California. Their son James Edwin was born on February 22, 1871.
When they returned to Texas, Reed became part of the Younger, James, and Starr outlaw gangs. It's speculated that the Reeds moved their children in with some relatives while those gangs looted and robbed, and killed. It was about that time that Belle got her start as an outlaw. She operated a livery stable in Dallas where it is said she sold stolen horses -- horses stolen by Reed and those gangs. Yes, her livery stable was a front for moving stolen horses.
Of course, this is all part of the myth behind the woman. In reality, people might find it interesting that there are no records, newspaper articles, or posters claiming a woman by the name of Belle Reed ever committed a robbery of a bank, a train, or a stagecoach, or was involved in a murder, or was suspected of cattle rustling, or selling stolen horses.
Jim Reed was part of a gang that robbed an Austin-San Antonio stage in April of 1874. Though that's the case, there is no evidence that Belle took part or was ever named as an accessory. Jim Reed was killed in Paris, Texas, in August of 1874. And as for the story that says Belle refused to identify his body so that the sheriff there wouldn't be able to claim a reward, that is extremely unlikely to have happened. Besides, Jim Reed was easily recognized when he was killed.
While it is said Belle Reed one of the Younger gang after Jim Reed was killed, to my knowledge, no one knows if that is just more myth about her ties to outlaw gangs. It is known that on June 5, 1880, Belle married 21-year-old Sam Starr in the Cherokee Nation. Belle was at that time ten years older than Sam Starr.
As the saying goes, "Once a horse thief, always a horse thief." And frankly, while Belle Starr wasn't a killer or a bank robber, she was certainly a horse thief. In her case, it was in late 1885 that Belle Starr was arrested for stealing horses on an Indian Reservation. It is believed that Sam Starr was in on it but was able to getaway. Since stealing horses on an Indian Reservation was a federal offense. Though seen as a capital crime in most of the West, she reportedly received two six-month terms at a Federal Corrections facility for her crimes. It was after that arrest that newspapers dubbed her "The Bandit Queen."

During her incarceration, on December 17, 1886, her husband Sam Starr was shot and killed by an Indian policeman on the Reservation. That shootout no small incident since it also resulted in the death of that Indian Policeman.
Reservation Police Officer Frank West was shot and killed by an extremely intoxicated Sam Starr at a dance near the Canadian River. Starr approached Officer West and accused him of killing his horse. Starr then pulled a handgun and instantly shot Deputy West in the neck. Though himself dying, Officer West was able to return fire and kill Sam Starr. Officer Frank West was survived by a wife and two children.
It was learned later that the suspect was Sam Starr who was married to Belle Starr and who had been an accomplice of the Younger Gang. The Younger Gang was involved in the deaths of Deputy Charles Nichols and Deputy James McMahan of the Dallas County Texas Sheriff's Department in 1871 and Deputy Edwin Daniels of the St. Clair County Missouri Sheriff's Department in 1874.

Belle Starr is linked to many outlaw men, including outlaws Jim Starr, Blue Duck, Jack Spaniard, and Jim French. Supposedly she either married and simply lived with many of them. No one really knows if she really married again after the death of Sam Starr. It is said she survived all but two of them.
On February 3, 1889, while Starr was living in the Choctaw Nation, near the Canadian River, an unknown assassin killed her from ambush with a shotgun. She lingered for an hour before dying. She was killed two days short of her 41st birthday. Although the names of many killers were rumored to have killed her, with only two men as serious primary suspects in her murder, no one was ever arrested for her murder.
As for her burial, she was dressed her in black velvet riding attire with boots and adorned her with the jewelry she had stolen from others. Legend says she was buried with a pearl-handled Colt .45 cradled in her hands. Her casket was a homemade pine box. It wasn't that much later after she was buried that the Indians there robbed her grave and stole the pistol and the jewelry buried with her. Yes, the jewelry that Belle stole from others.
Her daughter is responsible for later erecting a headstone engraved with a bell, a star, and a horse. The story goes that the headstone was purchased by selling earnings that she made while working in a brothel. As for where she's buried? Belle Starr was buried at Younger's Bend, which is a remote place on the Canadian River where she lived in a three-room cabin. When she was alive, it was a place where she allowed outlaws to hide out from the law -- for a price. Her cabin burned down in 1933.
I find it interesting that Belle Starr was really just a local criminal, and was actually unknown outside the Cherokee Nation and a few places in Texas and Arkansas. That changed after she died and newspaper reports of her death were picked up by Richard K. Fox who was the publisher of the National Police Gazette. He published the story Bella Starr, the Bandit Queen (1889), which was a fabrication of her life, a story of her supposed exploits. He took the life of a petty horse thief and turned her into an outlaw Queen.
Of course with his story, the rather homely Belle Starr became a legend. After that, as was the case of others who never lived the lives that writers gave them, more embellished books in the form of biographies and dime novels came forward. All had one thing in common, like the lives of Wyat Earp and Doc Holliday, they were ultimately simply fictionalized -- and perfect for Hollywood.
Tom Correa
Posted by Tom Correa at 2:38 AM