I was recently asked about the term "Drinking the Kool-Aid" and where it came from. While I don't do too many articles on fairly modern history, I figured it would be okay to talk about something that many of us read about in the newspapers and saw on television back in 1978.
How and why did the phrase originate in 1978? The phrase originated because of what took place in Jonestown, Guyana, on November 18, 1978. It was there that over 900 men, women, and children volunteered to drink a powdered drink laced with cyanide.
They were members of the Peoples Temple movement, a religious cult. Formally known as "The Peoples Temple of the Disciples of Christ," it was simply known as "Peoples Temple." They were Americans who joined a "new religious movement" that started in 1955.  The Peoples Temple combined elements of Christianity with Communist and Socialist ideologies with an "emphasis on racial equality."
The cult was founded by a self-declared "Reverend" by the name of  Jim Jones in Indianapolis, Indiana. By the early 1960s, Jones moved his cult to California with a headquarters in San Francisco. It was in California that he set up a franchise for his cult. It wasn't long before he expanded his cult from San Francisco to many locations there -- including Oakland and Los Angeles.
Believe it or not, with contributions pouring into the Peoples Temple, Reverend Jones created close ties with the Democratic Party and many Left-Wing Communist political figures. He made contributions to Leftist organizations, and like Bernie Sanders, advocated Communism. Jones, like Sanders, was a great admirer of Communism under the Soviet Union. Like Sanders, Jones is known to have lavished praise on that Communist nation. Jones reported that his Peoples Temple had 20,000 members nationwide.
In 1974, Jim Jones attempted to expand his Socialist ideology by signing a lease to land in Guyana. The land would be used to create a community called the Peoples Temple Agricultural Project, or simply known as "Jonestown." In 1977, the same year that he was awarded the Martin Luther King, Jr. Humanitarian award at Glide Memorial Church in San Francisco, he started his settlement with fifty residents.

Jones saw "Jonestown" as a "Socialist paradise" and a "sanctuary" from scrutiny. Increasing media scrutiny based on allegations by former members was exposing Jones for his swindling both cash and property from his followers. After Jones left for Guyana, he encouraged his Temple members to follow him there. Soon, the population of Jonestown grew to over 900 people by 1978. From what I remember, most were black Americans from the San Francisco Bay Area.
It is said that those who moved to Jonestown were promised a tropical paradise free from the supposed wickedness of the outside world. It was supposed to be a place where Socialism and Communism would provide them with a Heaven on earth. Instead, what they found was a Socialist community where Jones ruled through fear and intimidation, a place where medical facilities were non-existent, where simply comforts and food was not available. It was a place where freedom was a thing of the past.
On November 17, 1978, U.S. Congressman Leo Ryan visited Jonestown. He was there investigating claims of abuse and loss of basic civil liberties to the Americans. During Congressman Ryan's visit, several members of the Peoples Temple expressed wanting to return to the United States with him. The next day, November 18, those members trying to flee Jonestown actually accompanied Congressman Ryan and his staff to the local airstrip at Port Kaituma.
I remember watching what took place at that airport because it was filmed and on every news broadcast on television for days. The film showed people milling about while boarding a fairly small plane. Then a tractor pulling a trailer with gunmen pulled up nearby. After the driver of the tractor got off the tractor, the gunmen simply opening fire on the delegation and those trying to escape Jonestown. Then the film was cut off. Later, I found out that the cameraman was one of those killed.
The order was put out by Reverend Jim Jones to kill the Congressman and those trying to leave. With that, the Congressman's delegation was met as they were boarding their aircraft by Peoples Temple gunmen, who some have called the Peoples Temple security guards.
Those gunmen opened fire on the group, killing Congressman Ryan, three journalists, and one of the defectors. A few seconds of gunfire from the incident were captured on video by NBC cameraman Bob Brown, one of the journalists killed in the murder spree. Many were wounded during the shooting.
That evening, the Peoples Temple leader Jim Jones proposed "revolutionary suicide" for all of his more than 900 followers. They were to do so by drinking a powdered grape drink laced with cyanide and other drugs. The drink had been prepared by Jones' staff. While it's said that a few who refused were shot, most of those who followed Jones did not question him and simply started "drinking the Kool-Aid."
It's true, Reverend Jim Jones ordered his congregation to drink a powdered concoction laced with cyanide. In all, 918 people died there. And of those, 276 were 17 years of age and under. Yes, just children. Most all volunteered to commit suicide because they were told to do so by their movement's leader, Jim Jones. That's why the term "Drinking the Kool-Aid" has such a negative connotation today. 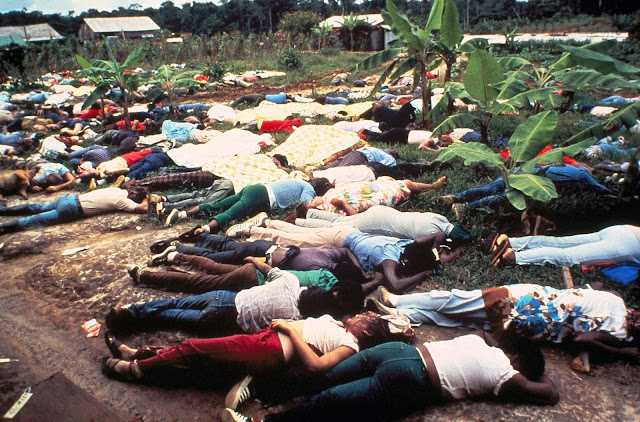 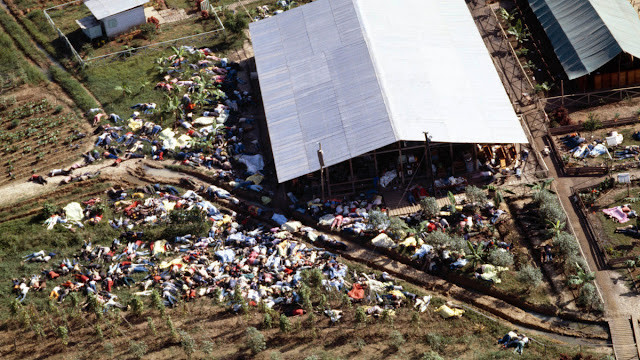 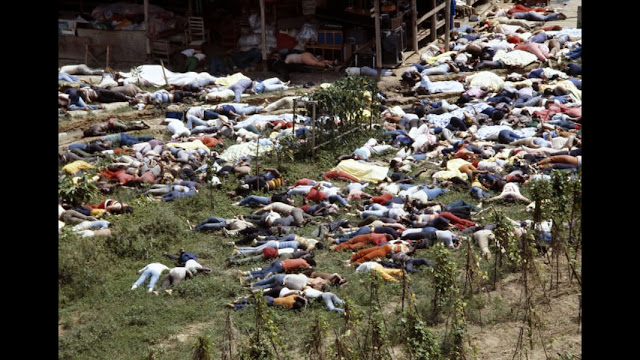 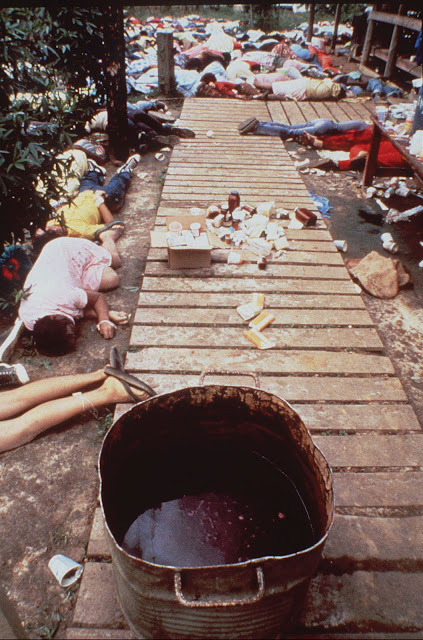 A month after the mass suicide at Jonestown, the FBI reported:

California Congressman Leo Ryan was concerned. He’d been hearing that there was trouble in “Jonestown,” the makeshift settlement carved out of the jungle of Guyana by the charismatic Jim Jones and his cult-like following called the Peoples Temple.

The allegations were serious: Jonestown sounded more like a slave camp than a religious center. There was talk of beatings, forced labor and imprisonments, the use of drugs to control behavior, suspicious deaths, and even rehearsals for a mass suicide.

In the fall of 1978, Ryan decided to visit Guyana to find out what was happening to the more than 900 members of Jonestown, many of whom were his constituents from the San Francisco area who’d followed the scandal-plagued Jones to South America.

Ryan and his congressional delegation flew to Guyana on November 14, 1978 — 29 years ago Wednesday. A few days later, they arrived in Jonestown along with various government officials and a group of reporters. There, Ryan met with Jones and interviewed many of his followers. Not surprisingly, some families and several individuals asked to leave with Ryan, while others apparently left on foot on their own. Jones was not happy.

Ryan wanted the entire group to fly out together, fearing retribution to any left behind, but that required a second plane and delayed the departure. The group eventually assembled at a local airstrip on the afternoon of the 18th, but as Ryan’s plane prepared to leave, a dump truck from Jonestown arrived with several armed men. They opened fire on one plane, while a cultist named Larry Layton on board the other pulled out a gun and began shooting. In the melee, Ryan and several others were killed and many wounded.

Meanwhile, back at the compound, Jones was hatching an unthinkable plan. He called his followers together and essentially ordered them to swallow a fruit drink that was apparently laced with cyanide. He rationalized that the attack on the planes would bring harm to the residents of Jonestown. A few apparently objected, but in the end, more than 900 cultists, including more than 200 children, were soon lying lifeless on the ground. Jones, too, was dead, with a gunshot wound to the head.

We soon launched an extensive investigation in concert with other agencies, with our jurisdiction based on a congressional assassination law passed six years earlier. Working with authorities in Guyana, agents interviewed survivors of the mass murder/suicide, while fingerprint and forensic experts from our Disaster Squad identified the many victims and Jones himself. Agents across the nation also searched out and talked with members of the Peoples Temple in the U.S. for further insights.

In the end, along with helping to unravel the chain of events and bring closure to grieving families, we were able to make a case against Larry Layton. Layton, the only member of the Peoples Temple tried in the U.S. for criminal acts at Jonestown, was ultimately extradited, convicted, and sentenced to life in prison.
-- end of the report.

The term "Drinking the Kool-Aid" is today an expression used to refer to people who are blindly obedient to a bad idea, a crooked or dangerous ideology. It refers to someone who accepts Communism and wants Socialism without ever experiencing life under such totalitarian rule.
The phrase "Drinking the Kool-Aid" really does have negative connotations. It means buying into false claims and promises that are made but never fulfilled. And while it may simply be a term referring to the fact that we should be aware and not "blindly follow" others who may not be very moral or honorable, we should never "drink the Kool-Aid" and follow others who have never done anything to deserve our loyalty.
This is true when it comes to career politicians, especially if we're being asked to "drink the Kool-Aid" and just blindly trust them when we should not. For example, this is the case with Joe Biden and Kamala Harris. They too are painting Socialism, over-regulation, and the Ultra-Left's Green New Deal as a paradise, a Heaven on earth. Yet, they have spent years in office and have done nothing for us.
Biden and Harris are trying to get us to "drink the Kool-Aid" when we all know better.
Tom Correa
Posted by Tom Correa at 1:25 AM