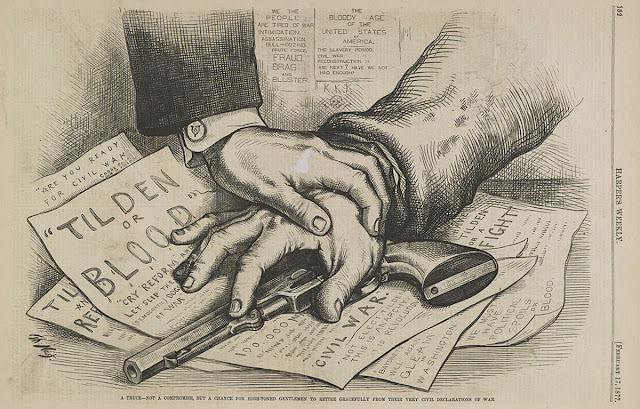 Presidential elections have not always been easy going for everyone concerned, including for we the American people. In 2000, that presidential election was a real mess. First, a television network mistakenly announced the wrong projection on election night, and that led to an early concession call by Al Gore to George W. Bush. Gore withdrew his concession an hour later. The presidential election hung in limbo for the next 36-days as a political and legal war over how to resolve what was essentially a tie that took place.
George W. Bush was ultimately declared the winner after a divided Supreme Court ended the manual recount in Florida that some on the Left still claim might have produced a different outcome. The problem was not uncounted votes. Instead, the issue of fraud became obvious when the Left only wanted to count what they saw as votes for their side -- votes that the Left kept finding, which miraculously only went to them and none to their opponent.
In the end, it was the closest presidential election in American history up to that time. How many votes separated them? Well, several hundred votes in Florida determined the winner out of more than 100 million ballots cast nationwide.
Here's something to think about. If you think that this is just a symptom of recent times, don't. The presidential election of 1876 was a real mess. And frankly, because its resolution was left to Congress and the Supreme Court, it had horrible consequences for the nation for almost a century. Consequences that cost the lives of many black and poor white Americans in the South.
While Republicans were very popular before, during, and after the Civil War, there is a reason that the Democrats made such a showing at the 1876 Presidential Election. The fact is that 1876 was not a good year for the nation. The Panic of 1873 threw our country into what became known as the "Long Depression."
Subsequently, from 1873 to 1879, it is estimated that more than 20,000 businesses, including more than 80 railroads, went bankrupt. Americans were broke and hurting in 1873, and that was the case until 1879 officially. Although, there are those who say that economic depression lasted well into 1885. And there is something more, as a result of the high cost of the Civil War, those funds expended by the states before and after the war, there was a great deal of economic instability of the states' economies. As a result of that being the case, 10 states and almost 300 banks also went bankrupt. It wasn't until 1878 that unemployment peaked during that economic depression.
While there is no mistaking the fact that political corruption in the government was a factor of discontent with voters in 1876, we should not make the mistake of thinking that they did not vote their pocketbooks as Americans have during every instance of economic hard times.

In that election, the Democrat candidate emerged with the lead in the popular vote, but 19 electoral votes from four states were in dispute. It was a long and drug out election where Congress was forced to get involved. In fact, in January of 1877, Congress was forced to convene to settle the election.
In 1876, the nation went to the polls to elect President Ulysses S. Grant’s successor. The candidates were  Democrat Samuel Tilden, Governor of New York, versus Republican Rutherford B. Hayes, Governor of Ohio. Tilden emerged with a lead of more than 260,000 popular votes. Though that was the case, Tilden only had 184 electoral votes. He was one electoral vote shy of the number needed to defeat Hayes.
The returns from three states, Louisiana, Florida, and South Carolina, were being disputed, with both sides claiming victory. Together, the states represented 19 electoral votes, which along with one disputed elector from Oregon, would be enough to swing the election in favor of Hayes.
Since the U.S. Constitution did not provide a way of resolving the dispute, Congress would have to decide. As anyone knows, that meant politics and deal-making. At the time, Democrats controlled the House of Representatives, and Republicans controlled the Senate. Yes, like today in 2020.
To find a solution, a political solution, the House and the Senate created a bipartisan electoral commission with five representatives and five senators. The commission also included five Supreme Court justices. In the end, after a series of votes along strict party lines, the commission awarded Rutherford B. Hayes all three of the contested states in early March of 1877. Their decision made him the winner of the presidential election of 1876 -- by a single electoral vote.
Soon after his inauguration, Hayes made good on his promise, ordering federal troops to withdraw from Louisiana and South Carolina, where they had been protecting Republican administrators and freed blacks. Hayes effectively ended the Reconstruction Era and began 100 years of Democratic Party control of the South.
So now, what sort of deal was struck to get the commission to vote for Hayes over Tilden? Well, that has to do with what became known as the Compromise of 1877. The fact is, as the electoral commission deliberated, politicians from both parties met in secret to hash out what become known as the Compromise of 1877. That so-called "compromise" ended Reconstruction and resulted in almost a hundred years of Democratic Party control and institutional racism in the South.
For his part, Republican President Rutherford B. Hayes agreed to place a Democrat Southerner on his cabinet. Hayes agreed to hand over control of the South to Democrat state governments. He promised and did, in fact, remove federal troops stationed in the South. Of course, along with removing all federal troops from the South, Hayes promised that he would not use federal troops to intervene in race riots and violations of the Civil Rights of blacks and poor whites in the South.
Let's be clear here, to get the presidency, Hayes effectively made freed blacks and poor whites the targets of terrorism, abuse, intimidation, and murder by the militant arm of the Democratic Party -- the Ku Klux Klan. With Hayes in office, it became obvious that Americans did not have a President Grant to take the fight to the KKK anymore. And yes, the Klan would actually grow in numbers and reach their peak in the 1970s before seeing any sort of real decline.
As for their part of the Compromise of 1877, Democrats agreed not to dispute Hayes's election to the presidency. Along with that, Democrats agreed to respect the Civil Rights of black Americans. It was something Democrats had no intention of respecting. Because of the Democrats going back on their word, the Hayes administration period is one marked with horrible violations of Civil Rights and murders of black Americans with the federal government refusing to act. It is also marked with Democrats in state offices reversing most of the Reconstruction policies put in place.
Democrats controlling the South did not honor their agreement to safeguard the rights of both black and poor white citizens. In fact, they did the opposite and reigned terror on blacks and poor whites alike. That was so much the case that there was a campaign to disenfranchise black and poor white voters and ensured racial segregation by imposing Jim Crow laws, which endured until the Civil Rights movement of the 1960s.
Everything that took place due to the mess that was the presidential election of 1876 simply demonstrates what sort of ill can take place by leaving an election to the Congress and the Supreme Court to decide. As a result of that agreement, Americans paid a horrible price with churches and homes being burned to the ground. Families were terrorized, both black and white Americans whipped and murdered, lynched in many cases. To me, the resolution to the presidential election of 1876 was a pact with the Devil.
Tom Correa
Posted by Tom Correa at 1:57 AM