Who Was Texas Guinan 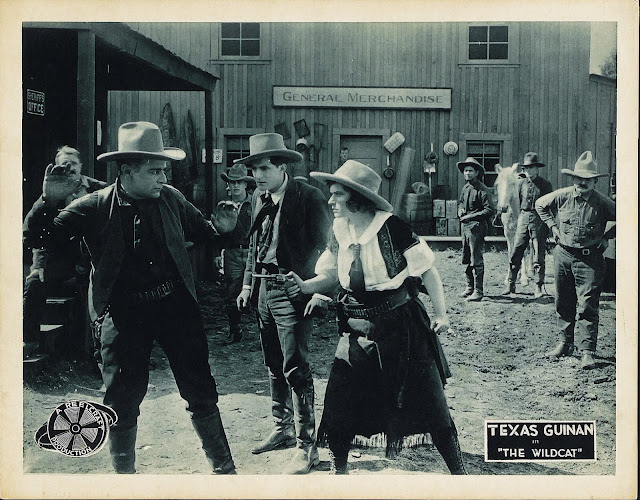 She was born Mary Louise Cecilia Guinan on January 12, 1884, in Waco, Texas. Her parents were Irish immigrants who arrived in Canada and migrated to the United States. Mary Louise went on the stage at a young age. At a young age, she left home in search of fame and fortune. While that's not unusual for someone who sees their small town as limiting, her dreams led her to fame of sorts.
For a number of years, she barnstormed with stage companies and then was part of travel rodeos. She is reported to have joined a Wild West Show before she ended up in Chicago where she got married to a newspaper cartoonist in 1905. Supposedly, her first marriage only lasted two years. By 1906, she was divorced and living in New York City working as a juggler, singer, and dancer on Vaudeville.
She was known to a gifted storyteller who had the gift of gab. The vivacious Mary Louise was described as a combination "barking P.T. Barnum and flirtatious Mae West."  It wasn't because of her size, or because she was also known for being loud, brassy, obnoxious, and sarcastic with everyone that met that she was saddled with the moniker "Texas Guinan." She was from Texas.
In Chicago, she had parts of increasing importance in a series of musical comedies and revues, including Miss Bob White, The Hoyden, The Gay Musician, and The Passing Show of 1913. 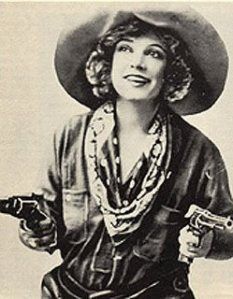 By 1917,  she landed in California where she landed a job as an actress in about 200 silent films known as "two-reelers," films that were about 20 minutes long. Because of her talent with horse and familiarity with guns, she usually played the part of the Western heroine who wasn't afraid to grab a six-gun or the reins of a horse. It's said her small parts actually creating a new role for the Western woman in films -- one who wasn't afraid to be a heroine. In those films, she typically portrayed a blunt, aggressive, Western heroine more in the tradition of the dime-novel. It was during this time that she was also part of a troop of entertainers who when to France to entertain the troops during World War I.
As for her appearances in films, it's said that her "cowgirl heroine" act in movies was fairly unique in film at a time. That's very true when one considers how women in Westerns, what film-makers called "Horse Operas" or "Oaters," were normally cast as helpless damsels in distress who needed a tall, dark, and handsome hero to come to their rescue. While she was looked upon as unique,  she was already looked at as being too old to work in films even by the Hollywood standards of the time. To fight being alienated from being cast because of her age and the fact that she wasn't very slim, she tried running her own silent film production company for a while.
As an actress in silent movies, Texas Guinan created a new kind of heroine in films. But since she was not a quiet or shy person, her brassy attitude, age, and size all worked against her in Hollywood. Of course, that didn't stop her from being herself. In fact, I'd say it was her being herself that landed her in a position more suited to she was. That has to do with the story of how she returned to New York.
According to legend, she was attending a party when she began to sing and entertain people there. While it was all a spontaneous response to liven up a fairly dull party, the people throwing the party liked what they heard and hired her to emcee their club in New York.  She was 39 and had a reputation for being outspoken and brassy. Becoming an emcee was considered groundbreaking since most in that position at the time were men. The fact is, it was seen as a man's profession. 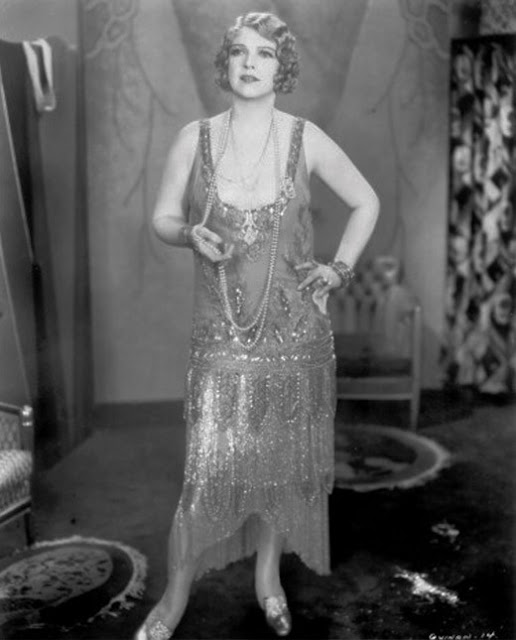 "Hello, Suckers!"
To fit in with the East Coast celebs visiting the club she was hired to emcee, it's said she died her hair blonde and wore strings of pearls. For all practical purposes, Texas Guinan became a flapper. She was fashionable and intent on enjoying herself while flouting conventional standards of behavior. Yes, all while showing everyone a great time. To do so while working in that club as an emcee and hostess during the Prohibition era, she was known to greet both wealthy gents and gangsters alike with "Hello, Suckers!" That was Texas Guinan.
She became quite the celebrity in New York and teamed up with a known bootlegger and gangster by the name of Larry Fay in 1924. While working at his El Fay Club, she hobnobbed with the rich and notorious alike. Along with being emcee, she got a percentage of the club and was in charge of the entertainers, including the showgirls. Those luscious ladies were bait to get the guests in the door. It's said that many of those showgirls were on loan from the Ziegfeld Follies and who were known to supplement their wages as prostitutes.
Guinan's job was to greet and insult guests. Yes, sort of like a female Don Rickles. That was her schtick. Along with coaxing those there to get drunk on the bootleg whiskey, she became quite a celebrity in her own right. Between Fay and Guinan, they are said to have made a million dollars in today's money.
While some say she saw everyone as a sucker ripe for the pickings, she is known to have given a great deal to charities. As for her work ethic, she was said to be a hard worker who was the first to arrive at the clubs and the last to leave. She had a large home in Greenwich Village. She moved her parents and brother Tom from Texas to live a better life with her there. What might not surprise some is knowing that Texas Guinan was a voracious reader and she loved her home. Her father and mother were known to sit in her clubs enjoying milk or coffee while enjoying their daughter's "insult comedy" performance.
What was her act? She was perched on a stool in the center of the club. She was armed with a whistle and she used her booming voice to single-handedly create an atmosphere of fun which was absolutely unique among nightclubs of the Prohibition-era, and greeted each newcomer with "Hello, Sucker!" Her particular name for the free-spending out-of-towner was a "big butter-and-egg man," which entered the vernacular of the era. 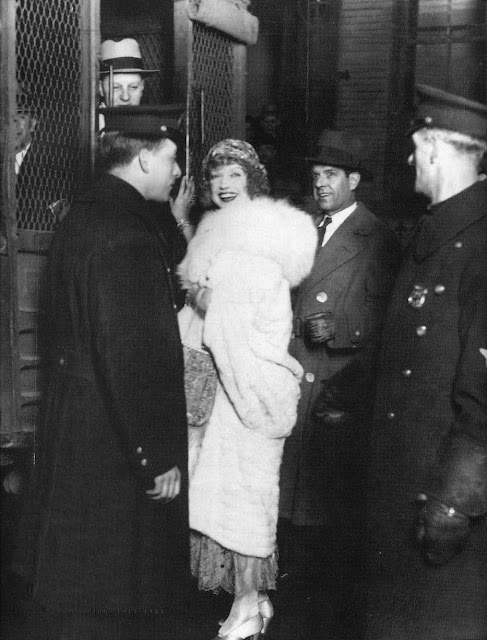 Her Arrests!
As for being arrested, she was arrested routinely for violating Prohibition -- but because of expensive lawyers, she was never tried in court. Also, the authorities could never prove she had any ownership in the clubs. Of course, her arrests made headlines on both the front page and in the society columns. And her attitude about her arrests only made her more famous.
It became such a common practice for the police to raid her club that she paid the police to let her know when they were coming. She would prepare for them by welcoming them with photographers and even having her band play the "Prisoner's Song" as they escorted her out of her nightclubs. It's shouldn't surprise anyone that she was known to routinely buy the police breakfast since she was also known to bribe the police to get rid of any evidence that may get her in real trouble.
As for her partner gangster Larry Fay, it's said he was not happy to hear she wanted her own club. When it became known that she felt threatened by him when she brought it up to him, her friend Owney "The Killer" Madden came to her aid. Because both she and Fay knew Madden would protect her no matter what, Fay decided to leave her alone. Fay himself was killed in 1933 at another club that he owned.
After the police closed the El Fay Club, she reappeared at the Del Fay and then at the Texas Guinan Club, the 300 Club, the Club Intime, and Texas Guinan’s Salon Royale. In a short time, she became one of the best-known celebrated figures of the 1920s.
As for Texas Guinan, she was known for saying, "Never give a sucker an even break." And yes, she charged a very steep cover charge and outrageous prices for the bootlegged booze she was passing off as premium liquor. Especially for the times, $25 for a bottle of rum was certainly outrageous. Of course, it's ironic that she didn't drink while she attracted the wealthy, film, stage, and radio celebrities, and the notorious to her clubs -- as well as clubs she may have had a share in over the years.
What was the attraction? She adorned herself in furs and jewels. Of course, she famously wore a police whistle around her neck which she used during her arrests. Where ever she worked she was the life of the party, and everyone wanted to say they knew her. In the 1920s in New York City, Texas Guinan was the "undisputed queen of the nightclubs."
She typified the craziness of post-World War I America, the Roaring Twenties, the days of bootleg whiskey, speakeasies, and flappers. It's said she loved her fame, attention, and status. And for those who came to see her and have fun, it's said they loved her charm, glamour, and confidence as she poked fun at everyone no matter what their station or their status. Texas Guinan returned to the Broadway stage with her own revue, Padlocks of 1927.
Things did change for Texas Guinan with the stock market crash of 1929. While people say the stock market crash under the Hoover Administration is when the Great Depression started, I content that the Great Depression actually started a few years earlier for blue-collar workers. It was in 1929 that the wealthy got hit. Because of the economic impact on the wealthy and celebrities, nightclubs like hers didn't fare very well.
Because of that, Texas Guinan relocated to Hollywood again to make a "talking picture," the film Queen of the Night Clubs (1929). As with many actors, she took her act on the road, and in 1931 her road company was refused permission to perform in France because of her reputation of consorting with gangsters. It was because of their refusal that she renamed her revue Too Hot for Paris. She continued touring and returned to Hollywood to make another "talking picture," the film Broadway thru a Keyhole (1933). 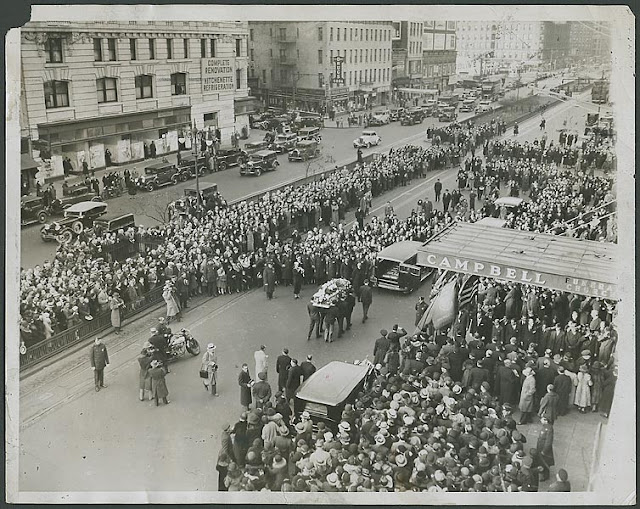 During her Western tour, she fell ill and died on November 5, 1933, in Vancouver, British Columbia. She died of amoebic dysentery which is a parasite infection of the intestines. It's believed she contracted the disease when she visited the Chicago World's Fair during the previous summer. It is important to note that about a hundred others also died from that same thing as a result of contaminated water at the hotel where she and the others were staying.
It's said that more than ten thousand people showed up for Texas Guinan's funeral at Calvary Cemetery in Woodside, New York. She was buried dressed in a white beaded chiffon dress with a diamond ring and necklace. On her shoulder was pinned a spray of orchids. At one point her funeral became chaotic when a crowd forced their way past the police all in an effort to tear flowers off her silver coffin as keepsake mementos. She was only 49 years old and lived a life that some called "remarkable." Yes indeed, I'd say she certainly lived a remarkable life.
Tom Correa