No Amendment To The Constitution Is Absolute To Dictators 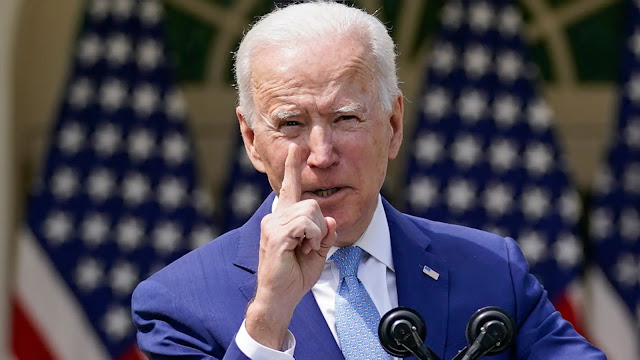 The most frightening statement ever made by a sitting American President in the history of the United States was made by Joe Biden when he said, "No Amendment to the Constitution is absolute."
But, before we get into what Biden is doing, let's take a minute or two to talk about America and my getting a bit of hate mail that I really want to address here. Don't worry. I will tie it in with what Biden is doing in a few moments.
Over the years, I've gotten a lot of hate mail. And, while I haven't let them get to me, there are those times when someone comes up with something that you know you just can't let slide.
As most of you know, I'm just a writer. I'm a Conservative, a blogger, a Veteran, an old Marine who volunteers a lot of my time to make my small community a better place. I'm just a man who takes care of a few horses who would have otherwise been put down. I'm just a man who loves America, most of my fellow Americans, certainly not all of them, and sees the world in a lot more ways than simply as black and white -- thanks to great parents and grandparents and other mentors.
I was brought up to appreciate our nation's fundamental principles and values, including equality, the rule of law, limited government, and the greatness of representative democracy. I was taught to appreciate why our "Founding Principles," sometimes referred to as "America's First Principles," are the foundation of our great nation.
Among those principles is that we have Rights that come from God, not the government. While the government might make laws governing civil behavior, our Rights come from God. That's a big difference which seems to be forgotten these days. Of course, where's the shock in that since we have a government these days that really sees itself as being God-like.
As for being forgetful, there's a lot that many of us have forgotten these days. For example, in America, as Americans, we all have the right to be happy and kind, sad, mean, and miserable, a Christian, Jewish, an Atheist, a Conservative, a Liberal, narrow-minded, completely understanding, charitable, and miserly. Yes, we have the right to be all of that in the exact same way that we have the right to be bigots, racists, prejudice, homophobic, xenophobic, or anything else that others might not like.
It's the luxury that we have of living in a free society. We can be who we want to be. And more so, as Americans, we can be who we want to be without needing the approval of others. You can dislike who you want to dislike. You can love who you want to love. You can despise the political policies of your choice. You can despise the Mainstream Media if you want. You can even hate people for whatever reason that you come up with. If you believe that character matters and not skin color, or that thugs and criminals should be dealt with as harshly as possible, that's your Right.
No, you do not have to be understanding of jerks and jackasses. You do not have to be understanding of people who commit horrendous crimes just because they are a certain color. And while we are on that subject, you have the right to accept the fact that color is not a race.
As for other political correctness today, as a free American, you don't have to pretend that a man is a woman when you know full well that they are not what they pretend to be. And really, the government cannot force you to pretend that some gay man is a woman. The government can't because we all have the right to think for ourselves. Yes, you have that right. It's really okay to think for yourself.
Because we're Americans, we don't need anyone's approval to think and feel the way we chose because we have the right to think for ourselves. Even if our opinions are what some may consider offensive to someone's sensitivities and "politically incorrect," we are free to have them. No one can tell you how to think.
And here's something more, in case you have not been reminded lately, allow me to remind you that whether some people like it or not, the government has absolutely no say in how we view life. It's true. The cold hard fact of life is that no matter how much it makes some on the Left crazy, the government cannot make demands on us other than for us to observe the law. Believe it or not, if you don't have a job, the government can't even force you to pay taxes. So yes, the only thing the government can do is to demand that we be law-abiding citizens.
The government cannot tell us how to think and feel or act other than demanding that we obey the law. I know that I keep repeating that, but it's essential to remember. Please understand what that means. The government cannot tell you to shut up and conform to its demands to act and think in ways contrary to how you feel about things. No, this is not Nazi Germany of the 1930s. At least, not yet.
As for political power, we have a "Social Contract" with the government. Our contract with the government states that the will of the governed, we steer our government. This means the American people are boss, not politicians. Somehow we forget to remind them of that fact, and they think the opposite is true. To me, when they start thinking that they are our boss, that's when they need to be shown the door and kicked out of government.