The Passing Of The Greatest Generation

While I do give people the benefit of the doubt, I sometimes wonder if people really know enough history to truly appreciate the sacrifices of others. As I watched the funeral of Great Britain's Prince Philip on television this weekend, I couldn't help wonder if people understand the significance of his passing. No, not so much for who he was, though his life of loyalty to his wife and nation is one that many would serve well to emulate, but more for the passing of his generation.

We forget that by World War I, America and Great Britain had extremely close ties. That's especially true when it came to foreign trade. After the first World War, Britain was already having it tough while paying off the debt that it accrued to fight World War I from 1914 to 1919. So when the Stock Market crashed in 1929 in the United States, so did the Stock Market in Great Britain.

As a result, the Great Depression that we felt here was also felt in Great Britain and other parts of the world. For Britain, its imports dropped by half, and its currency, the Pound, dropped in worth by more than 25%. The result was skyrocketing unemployment. The worse to be hit were coal mining, iron and steel industries, and shipbuilding.

It is said that unlike how everyone in America was adversely affected during the Great Depression, that wasn't the case in Great Britain where the lower classes were hit the hardest. Because of that, and the fact that building materials were cheap at the time, the British government was actually able to focus on rebuilding its slums. And like the work programs started in the United States by President Franklin Roosevelt, the job of rebuilding slums in England provided needed jobs. Jobs that many were more than willing to take.

My grandmother used to say, "A man feels better about himself when he's working." The ill-effects of the Great Depression on British and American families could be seen on the forlorn faces in the bread lines in England just as they could in the United States. And yes, we forget about the countless numbers of poor children who wandered the streets.

Because of those hard years, a time when they did in fact survive the lack of food, clothing, and many other essentials that so many today sadly take for granted, that generation was ready to take any job and work in whatever industry needed. Thus, they were prepared for the war effort. No, not only as a mission to defeat the Nazi war machine and the threat that it imposed -- but also as an opportunity to regain a sense of worth which the Great Depression had stole from everyone.

They are truly our Greatest Generation because they were raised during the Great Depression and went on to fight and endure the hardship of World War II. By September of 1939, Great Britain was at war with Germany. And even with the looming threat of a German invasion, the British people stood fast and fought on.

Here's a bit of trivia for my readers. At one point, the British government urged the Queen Mother to seek safety and leave England for Canada with her daughters. She refused. In fact, she is noted as saying, "The children won't go without me. I won't leave without the King. And the King will never leave."

Here's more. As the British rallied to the cause, then-Princess Elizabeth did her part. While the King and Queen initially refused to allow her to enlist, in fact noting that no female member of the Royal Family had ever joined the military, then-Princess Elizabeth did go on to join the British Army's Women's Auxiliary Territory Service (ATS). The ATS was very similar to our Women's Army Corps (WACs), and she registered as inductee No. 230873.

The future Queen of Great Britain enlisted under the name Elizabeth Windsor. And as with others in the Women's Auxiliary Territory Service (ATS) during the war, her assignment was to serve in a support function. And while many of the ATS women served as anti-aircraft gunners, radio operators, and drivers, Queen Elizabeth II was a mechanic. As for what that did for the war effort, it's said her enlisting in the military was an incredible boost to the morale of the British people during those bleak days when bombs rained on London and destruction and despair were everywhere.

So yes, with the passing of Great Britain's Prince Philip, we should all note the loss of those around the world who lived through the hard times of the great worldwide economic depression of the 1920s and 1930s, only to sacrifice so much to win World War II.

But let's also remember that they then went on to recognize, fight, and defeat the Communist threat of dictatorial world domination. And frankly, we can all thank God that there were those who were stronger than the minority, those vital to our existence, those who were absolutely unassailable, especially when they are compared to those weak and timid souls who are so willing to forfeit their liberties to be enslaved by Nazi fascism and Marxist totalitarianism.

Yes indeed. We really need to appreciate that generation and mourn their loss. After all, we owe them so much. 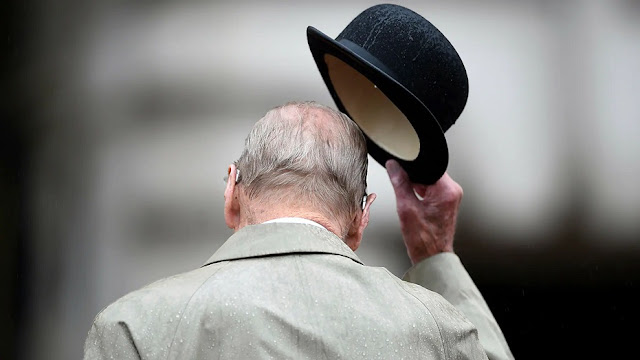