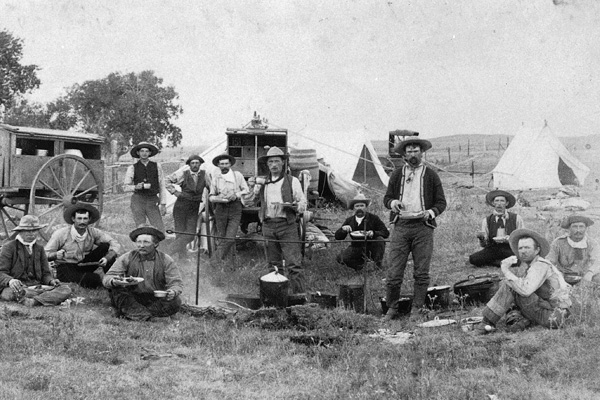 A reader wrote to ask, "What makes cowboy coffee different from my non-fat latte?" My first reaction was, seriously? Really?

Another reader, who said, "I am a man. And I want to know if cowboy coffee would give me the same energy as a Double Chocolaty Chip Crème Frappuccino or a cup of coffee using my Ethiopia Yirgacheffe Chelelektu from Starbucks?" Again, really?

Since I have never been to Starbucks, and I like coffee, let's talk about cowboy coffee. After I describe cowboy coffee to you, you tell me if it sounds like anything you get at that bastion of Leftist Political Correctness known as Starbucks?

First, what is cowboy coffee? Simply put, it was coffee made on the cattle drives long of the 1800s long before coffee makers were ever invented. It is coffee that is brewed with unfiltered coarse grounds. It is brought to a boil and left there for the better part of the day. It is made in a metal coffee pot preferably over a campfire or on a camp stove.

Get the pot. Add water. Dump in a fist full of coffee grounds. Set the pot on a fire. Let boil. Let it boil. Don't touch it and let it boil for a while. After it looks dark and sort of angry enough to eat a hole in your leather chaps, let it settle.

Once it stops acting up, pour it into a cup while trying to get as little of the coffee grounds as possible into your cup. As little as possible is the key phrase here. Those ground are valuable because they can be brewed over and over again for a day or two depending on how weak you like your coffee.
Cowboy coffee is unfiltered coffee that has been brewing all day, or longer, for the most part. Some say it can be a bit bitter. Since the old-timers of days gone by didn't have eggs on the trail, don't think you're being some sort of movie cowboy cook and adding eggshells to it to take out the bitterness. The fact is that eggshells do not take the bitterness out of cowboy coffee. That's just a myth started by people in Seattle who think everyone should know how to speak Italian in order to buy a cup of coffee.
As for the grounds? While some cowboys like to chew their coffee, some say just let the pot settle and you'll be fine. And while some say cowboy coffee is too acidic, they are obviously the people who want us to stop eating meat and start eating veggie burgers. Don't listen to them. They have way too much estrogen.
Okay, here's something to watch for. There are some people who see nothing wrong with relying on other nations for oil needs and really believe that the hoax called "Climate Change" is going to wipe us all out in nine years. Those folks may take off a sock, and not a clean sock, because they believe everything they hear on CNN and MSNBC, and will attempt to filter out the grounds as they pour a cup of what they call "Cowboy Coffee." That sort of stuff goes on in the Democrat Party where Communism and slavery are worshiped, but that should never happen among freedom-loving Americans.
Friends, cowboy coffee is the belly-wash that will make you put your mare away wet and worn out. It is not for folks in San Francisco or Portland or Los Angeles or even Austin. It's certainly not for the faint of heart in places like Minneapolis where people allowed their city to be burned to the ground by a bunch of Leftists who have never held jobs.
Real men drinking cowboy coffee on the cattle drives is how thousands upon thousands of head of cattle were pushed through some of the worse elements there was to feed a hungry nation. Men and women drinking cowboy coffee came West, build homesteads, remembered the Alamo, struck gold in all sorts of places, walked the dusty streets of places like Palisades, Nevada, freed the slaves, won the West, turned the Great American Desert into America's Bread Basket, built dams, created power grids, built power plants, and poured all sort of tonnage of cement to create our interstate highway system.
Friends, this is the sort of coffee that George S. Patton used to fuel his tanks. This is the "Joe" that won two World Wars and will defeat Communist China! It's not the Senile Old "Joe" who is owned by China and is sharing the White House with the laughing girl who is one something other than coffee.
This is coffee to make your day better. Cowboy coffee makes Americans stand up and salute our glorious American flag, kick butt, take names, and tell the world that we won't lie down when it comes to fighting for our freedom. That's what cowboy coffee is all about.
Cowboy coffee is like a roto-rotor for your bloodstream. It's the sort of gun oil that keeps your pump pumping. It's what you drink in the mountains after filling your stringer with trout. It's what you use to wash down half a dozen eggs and five pounds of bacon for breakfast.
It's a safe bet that President Trump drinks cowboy coffee since he's still putting the interest of America before the interest of other countries. It's also a safe bet that Biden is a decaf green tea drinker who is hoping that the estrogen in green tea makes him the tough guy that he wishes he is.
And by the way, while there might be those insecure souls out there who grow beards to show people that they too can look like men --  if you see one using his socks to filter his coffee, don't let him do it. Tell him to strain the grounds through a handkecheif. Or better yet, have them use their face mask as a strainer. It's almost a sure bet that they are wearing one. Although, people who drink cowboy coffee aren't the type to bow down to the crowd and wear face masks.
Tom Correa
Posted by Tom Correa at 1:24 AM