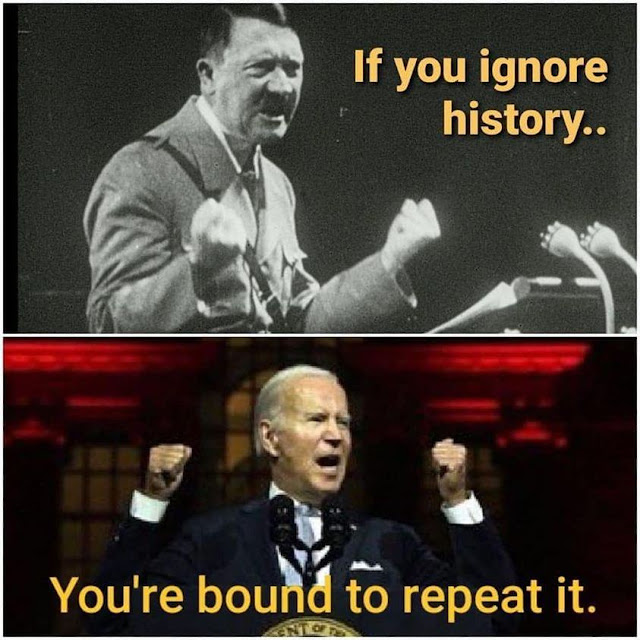 Since Joe Biden entered office and the Democrats have taken total control of the federal government, food and gas prices are higher than they have ever been. American truckers, farmers, ranchers, food packers, oil producers, our supply chain, all that feeds and clothes Americans are under assault by the Democrats -- and Joe Biden and his merry administration of Communists are leading the attack.
Today, because of Democrats, Americans are having to make the choice between buying food or buying gas to get to work; Poverty levels are increasing exponentially across the nation; Americans on Food Stamps have actually doubled in the last year and a half; American manufacturing is again shutting down and relocating overseas because of insane Democrat Climate Change Regulations. Over-regulation, high taxation, and Interest Rates at their highest in the last 40 years are all factors that are pushing American businesses to close their doors and families to worry about their futures. All are factors brought on by low-character Democrat politicians who could care less about what America wants and needs.

Because of the policies of Democrats wanting to turn America into a Socialist/Communist nation, the number of American Working Poor has increased to record highs and the misery for Working Class Americans is a way of life across America. Yes. all, while wealthy Democrat Party Donors are getting wealthier by way of Trillion Dollar Liberal Legislation, meant to make their friends even wealthier while taking more and more from our Working Class in more taxes.
And no, there is no need to wonder what sort of America we would live in where the federal government regards American parents as "America's Enemies." We don't have to because Democrats are saying that right now, today, just because American parents want a say in the education of their children.
Of course, Democrats are intimidated, frightened, and simply offended by what's good and right.
Over the years, Democrats have shown a deep-seated visceral hate toward the Bible, the Cross, Catholics, Protestants, Christians in general, the American flag, the Bill of Rights, Free Speech, Free Thinkers, and keeping federal and state governments in check. Democrats loath American Freedom.
Americans are sick and tired of Democrats wanting to attack our children with gender-altering drugs, and their indoctrination of turning biological males into something that they are not, What is it about American men and women that scares Democrats? Why do so many things scare Democrats? What's behind Democrats being so frightened of straight men and women, parents, boys who want to be boys, girls who like boys, girls who like being girls, motherhood, pregnancy, and children?
What sort of sociopathic reasoning is behind their hatred of White people, Americans who have jobs, people who create jobs, people who contribute to the common good, businesses, and corporations? Why is it that the only Billion-dollar corporation that Democrats love is Planned Parenthood? And really, why do Democrats fight so hard to kill babies, even up to the moment of their birth? What sort of warped mind believes that killing babies can fix the economy or is the cure for the hoax called Climate Change? And while there are those who staunchly support Democrats, even they are now coming around to face the facts that Democrat politicians are using the supposed threat of Climate Change to strip Americans of our Constitutional Rights and turn America into a Socialist/Communist Nation ruled by a select few powerful people in Washington, D.C..
Right now, across our nation, Americans are asking why. Why is it that Biden and his Democrat friends have such a deep-seated visceral hate toward anyone who believes that Americans need to put the interest of Americans before the interests of the rest of the world?
Why is it that Democrats are trying to divide Americans, pitting one against the other on so many levels, by the color of our skin, by our religions, by heritage, by ancestry, and by our political choice?
There is no reason that Biden has to accuse the more than 75 Million Americans who voted for President Trump of being "Enemies of Democracy" other than wanting Americans to see others as their enemy. Of course, that sort of political rhetoric is sadly reminiscent of what took place in Nazi Germany in the 1930s and 1940s when the German people were told that German Jews were their enemy.
So really, why accuse 75 Million Americans of being a "Treat to Democracy"? Why is it that Biden and his Democrat pals feel that they have to incite violence against those who do not agree with his draconian Leftist policies? Do Democrats hate our Republic so much that they want us divided? The only reason for this has to be that Democrats truly hate our Republic.
And yes, there is more evidence that he and his Democrat pals hate us. If not, then why allow more than two-million Illegal Aliens across our Southern border? And really, why have Democrats in control of the entire federal government opened our Southern border to vicious and violent criminals, Organized Crime, Drug Cartels, and Child Sex Traffickers? Democrats have turned their backs while violent criminals run rampant completely free from punishment or injurious consequences. They have down this out of financial gain and pursuit of political power. But also, out of hate for Americans.
Don't think so? Then ask yourself why is it that under Biden, the Democrat Dream of "Defunding The Police," their desire to eliminate Cash Bail, their desire to empty prisons and release criminals into our society, has been fulfilled with disastrous consequences. Ask yourself why Democrats have wanted to downgrade Felonies to the status of Misdemeanors and allow violent offenders to walk the streets? Ask yourself if you're okay with Democrats creating the highest levels of crime that our nation has ever experienced.
And really, ask yourself if you're still okay with Biden and the Democrats turning America into a nation that has to beg others for the oil and other resources that we already have? Look yourself in a mirror and ask yourself if you're okay with that, and all of the above? Then, ask yourself if you're also fine with Biden bringing us to a point today where we now face the prospect of World War III and Nuclear War with Russia, China, and North Korea?
While all that I've mentioned is what is taking place today, as horrible reality as this has all become after only being in power a very short time, the sickest part of this story is that voting Democrats still staunchly defend all of this and say that Joe Biden is a successful president. And though Biden and his cabinet of Communists have successfully ruined American lives, Democrats LOVE Biden and will turn out to vote for Democrats on Election Day.
And that, the fact that Democrats have such supporters, is scarier than anything else.
Tom Correa
Posted by Tom Correa at 11:50 PM