Let's Put Thanks Back In Thanksgiving 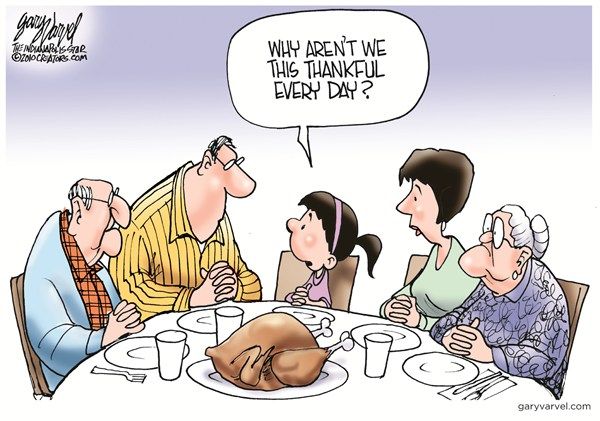 Conservative Americans don't need to be convinced of the sheer lunacy on the part of the Left who are trying to spread the crazy idea that inanimate objects such as roads and bridges can be racist. We know that trying to convince the world that there are more than just two genders is insanity. We fully understand that trying to change what we all know as scientific fact is dumb. We get it. We really get it because we all know that some things are indisputable. And yes, Conservative Americans truly understand that trying to create genders that don't exist, and actually using children as human lab rats, all just to support an immoral political agenda, is morally repugnant. It is wrong.
And yes, it's all about control. And yes indeed, I know full well that Conservative Americans will not accept being controlled by others. Liberals, those who are Artificial Americans, don't mind it because they don't understand that about us. We can all thank God that Authentic Americans are Conservative Americans.
America is based on the idea that we aren’t subservient to the edicts of Kings or Presidential mandates. While we can also thank God for giving us the strength to rebel against oppression and those who demand that we be submissive, being submissive does not feel comfortable for Conservative Americans. And yes, defying tyranny is as American as Apple Pie.

Because we can all be thankful that God has given us the ability to reason, to be fair and honest, truthful and trustworthy, reliable and respectful, as well as being kind and considerate, we can also be thankful that we are not blind nor ungrateful for those things which we have been blessed with. Among our blessings is that of living in a free country where defying oppression is an instinctive part of our very character. Of course, Liberals don't seem to mind being on their knees.

My friends, Americans, in general, don't have to like not having political representation. We don't have to accept increased unfair taxation, overbearing rules, or burdensome regulations. We don't have to like amoral or abhorrent social changes. We can decide for ourselves whether such issues are acceptable or not. This is part of an inherent quality that is ingrained in us. It is part of the American character. Sadly, it is not a part of the subservient Liberal mindset where submissiveness to the government is admired and encouraged. Of course, the question as to why Liberals want masters and disdain freedom is beyond all reasoning.

A disdain for freedom goes against the heart of being a Conservative American. I believe the love of freedom goes to the heart of most Americans. And really, I really believe that Liberals, those who want to treat themselves, their wishes, or their beliefs as being less important than the demands of the government, are a relatively small but vocal minority.
Of course, when it comes to fighting maliciousness or unjust treatment, or an abuse of power, be it big or small, this is an indispensable part of who we are. I believe it is rooted in our concern with the rightness or wrongness of things. And yes, it is rooted in our love of freedom.
I believe it's one of the many intrinsic virtues that God has blessed us with. And while I just wish the love for freedom was a bigger part of the Liberalism belief system that exalts what they see as the benefits of being slaves to the government, our love for freedom is among God's blessings that we should be thankful for.
It's one of the many reasons that I can honestly say, "Happy Thanksgiving!"
May God Bless you and yours!
Tom Correa
Posted by Tom Correa at 9:45 AM