IT WAS ALL ABOUT NEEDING MURPHY

I remember when "that question" started to bug me. I was volunteering at Menlo Park VA Hospital and I heard one of the doctors ask a Vet there, "What do you want in life?"

Later I heard the same doctor talk with another Vet and ask him, "Is there anything that you've always wanted, either to do or have? What do you want?"

It seemed for the next few weeks every time I turned around there was someone asking that question in one way or another. It was an interesting question really, considering I was volunteering at the PTSD unit and some guys there gave up on "wanting" anything a long time ago.  Most seem to feel they didn't deserve it, some just figured it wouldn't last, and of course there were those who acted as though wanting something was for children and not for grown people in the real world. No kidding, some of the guys had no motivation to want anything.

For me, while I had gone back to work after taking some time off between jobs. I had just started Contracting out my services and felt pretty good about it.

For the first time in my life, it seemed everything was working out as it's supposed to according to Hoyle.  I was doing pretty good for myself.  There was the business that I was trying to get started, I was in a fairly good relationship if you consider that we hardly saw each other most of the time, I was volunteering so that I could try to give back to the Community, and there was a few dollars in my checking that was actually mine to keep. Imagine that!

So why was "that question" bothering me?

Well for years I felt that I was missing something, something special, something that I felt I might have lost and couldn't find.  At first I thought maybe it was the adventure of the Marine Corps? And yes, I always looked at my time as a United States Marine as an adventure. Then I thought that maybe it was the camaraderie, the fellowship, the sea stories that I missed or really wanted back?

But it couldn't be and I really didn't think it was that because I didn't have a lack of friends. Most of the people I knew back then were very good friends, and yes they were great fun to be around even if they weren't as full of beans as some Marines can be.

Some of them I'd only met withing those few years after spending so much time on the road going around the country on work.  Some on the other hand were very old friends who would call me for get-togethers and maybe ask me to help out at their local rodeos. Of course they'd always call so that I could do my part during gatherings and branding season.

Most of them I had known for quite a few years.  One close friend told me later that though he really couldn't put his finger on it, he knew that I felt there was something missing.

A day or two after my birthday, I drove into the Union 76 in Livermore California for a fill up and a cup of coffee to go. It was a day no different than any other Winter day in the Bay Area, a little cold but clear. Livermore was still all and all a Cowboy town back then, and it was beyond most of our crystal balls to see that just ten to fifteen years down the road it would be transformed into some sort of "Yuppyville."

When I walked into the 76 for my coffee, I knew that I had met that young woman working behind the counter once before. And no, I couldn't remember her name. And yes, it surprised me that she remembered mine. After all, if memory served me right, she was after my friend Mark who happened to be single at the time.

"What's Mark's phone number? she asked with pen in hand waiting for me to give her his number.

"Why?" I asked not believing that she really expected me to give out a friend's number to someone who I hardly knew.

"Well, I'd like to call him. Do you think Mark would buy my horse?" she asked as though she knew Mark.

"Mark, buy your horse? No way! He's into motorcycles, not horses." I answered laughing a little at what I thought was a pretty good joke of sorts.

I paid for my coffee and walked outside to check on my fill up, and then decided to get more information about her horse since I might know someone in the market for one.

When I went back into the store to ask her about it, she said that her horse was a six year old registered Quarter horse bay, a gelding, and about 15.2 hands tall.  Then she went on to say that she was into racing barrels, and the reason she's selling him is that he was just too slow off the dime and around the barrels. She assured me that he was a great horse. According to her, he trailed well, was calm, easy to shoe, great with kids, and never gave her a lick of trouble. Sound familiar? I thought so to!

Before leaving I asked if I could take a look at her horse, just so that if anyone asked me if I had actually seen him that I can at least say that I did. She said she was getting off work in an hour and would be glad to show him to me.

I left and returned in an hour and then followed her to where she boarded her horse on the other side of Livermore.

It was an interesting stable. For one thing she had a trailer on the property and lived there. Secondly there were only a hand full of horses in the old place. It was pretty run down and looked like it was built in either the late 1950s or early 60s. It also looked like it once boarded maybe 40 horses easily. She helped maintain the stable in return for keeping her trailer there.  And yes, her trailer was indeed a Cowgirl Cottage.

When she brought out her horse, it was nice to see that she was exactly what she said he was. He was a bay, about 15.2 hands, a Quarter, a gelding, and yes he was calm. Actually lethargic was more like it.

She didn't say he'd been starved lately to save money on feed while she was selling him, or that he was skin and bones. She didn't say he was probably suffering from not being wormed in a long time, and she didn't mention how his hooves were cracked and uncared for. She also failed to mention how his teeth may have needed floating because it hadn't been done in forever and a day. In fact, the horse was completely neglected. And come to find out later, he was one of those horses that people buy and board and never care for or go see.

When she handed me his lead rope he slowly walked a few steps up to me with his head hanging down and when he reached me he just let out a groan.

Under his ragged coat and tangles mane, besides his cracked hooves, and worn out look, there was a horse with really nice conformation. He had a wide chest and straight legs. He wasn't pigeon toed or splayed. His head was nice, no roman nose or parrot lip, and his teeth looked good considering his upkeep. He wasn't sickle hocked and he had a great hind end. He was just gaunt and needed help.

I then asked her if she wanted a Check or Cash? She said she'd take cash if she could get it. And that's when I said, "Jump in my truck and let's go to my Bank. I'll give you what you'll take and not what you're asking for. He needs a lot of work and care. I'll give you cash. You can sell him to me."

And that my friends is how I bought my horse Murphy back in 1996.  The feeling that I had, well it was all about my needing my son Murphy.

That's right! Something was missing, and come to find out it was this horse. He found me to care for him.

And yes, he's been with me ever since. 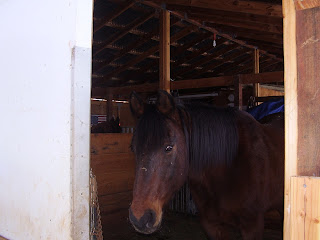