Which One Is The Real Communist?

A friend of mine put that interesting question to me. Since Chinese President Hu Jintao is visiting President Obama in Washington, which one is the real Communist?

Everyone knows that the Chinese government is our biggest lender. We owe them One Trillion Dollars in loans. Loans for money that went where? Who knows?

The Obama administration spent almost a Trillion Dollars on a so-called Stimulus Bill approved by the Democrat controlled Congress during Obama's first few months in the Oval Office.

The problem that most folks have is that no one knows where the money went, or who it went to. It's true. No kidding. Other then sending money to States who have spent themselves into a ditch, the administration has funneled money to so many Democratic Party politicians and their aides, DNC Party donors, and liberal organizations and other liberal causes.  Interesting enough the administration has no idea where all the money went.

It's sort of like what happens to the U.S. dollars that Americans send to other countries in foreign aid, or as disaster relief or famine relief.  First the heads of those governments take their percentage, then the lower bureaucrats take their cut, the local military get theirs, then of course there's handling charges, and it goes on and on. Heck, what makes it to the actual people that need help? Well, no one knows how much money actually makes it to where it is supposed to go because no one in the money chain wants to tell us what they got or even who got what.

Giving American dollars to foreign governments as Foreign Aid is stupid when we have to borrow the money from China in the first place.  It's like borrowing from a friend who happens to be a Banker so that you can give money to your sister.  You may look like a great brother because your sister knows she doesn't have to pay you back, but your friend just hopes you won't screw him out of the money you borrowed. Especially while the interest on the money is growing.

When the Chinese did their Stimulus Plan for their country, they gave the money directly to their people to spend and stimulate their economy. And it worked! Imagine that.

So at the State dinner, one has to wonder if President Hu has lectured Obama on the benefits of Capitalism? No kidding, the Chinese are all for it these days. They have found a great deal of power in making money. So maybe spending some time with President Hu will rub off on Barack Obama.

You see the question is a legitimate one. Obama wants to CHANGE America. And since entering office many Americans have seen his idea of CHANGE and now are asking if President Obama truly is some sort of a Communist?

Seeing President Hu with President Obama, it's fair to ask ... 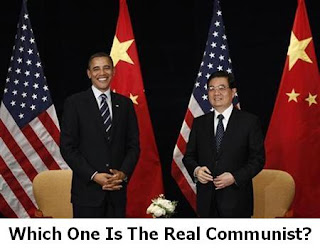