I never thought that I'd be in a position to defend Theodore Roosevelt. But I guess if I'm going to defend one of my heroes, then it may as well be TR.

Lately, maybe because the Progressives are so much in the news, I hear more people trying to paint TR as a flaming Liberal. But should anyone call him Liberal in today's terms? I don't see how!

He wrote over thirty books, a besides being our 26th President, he was also a Cowboy, a Policeman, a Soldier, a Conservative, a Populist, and an old school Republican activist.

He took that same sort of vigor to the Oval Office after McKinley was shot by going after corruption in the Political Machine of the times and the abuse of power by corporations over average Americans.

He was definitely anti-Special Interest and a Government ruled by those interest.

Some of the results of his fight were the never before heard of Child Labor Laws to restrict the exploitation of children.

And besides the Child Labor Laws, he championed the 8 hour work day, the 40 hour work week, an employee liability law for industrial injuries, and a living wage. This is what made TR so-called "anti-corporations".

During his time he was the first to start food safety regulations to stop the sale of bad meats and other foods, drugs, and beverages. The result was The Pure Food and Drug Act and Meat Inspection Act (1906) which was passed to protect public health.

He loved nature and championed the conservation movement of the time. He was a Conservationist and set goals to preserve the land FOR our future. He was not an environmentalist like those in today's Environmentalism movement which has become a political wing of America's Left and a haven for crazies who see humans as the enemy of the environment.

TR was so concerned about our environment and energy needs in the future so much that he put aside coal, oil, mineral, and forest reserves that did not come available until 2009. He knew that at the rate that they were using our natural resources during his term in office that there might not be any available one hundred years later. So he put much of those lands aside for the USE of Americans in later generations when he founded the National Parks system and other resource preservation acts.

He also championed a woman's right to vote and was a women's suffrage supporter to reform laws against women, especially old laws against a wife's right to inherit her husband's property. In many states at the time it was against the law for women to own property, and in many states after a husband's death ... the property would go to his next male kin.

TR believed in U.S. power, built up our Navy, welcomed the idea of U.S. expansion, and he even sought to extend the Monroe Doctrine to other countries. He put into place a temporary U.S. style of colonial rule over the Dominican Republic in 1905 and Cuba in 1906, as well as organizing the 1903 secession of Panama from Colombia in order to obtain the Panama Canal Zone.

In an article on immigration, Roosevelt said, "We must Americanize in every way, in speech, in political ideas and principles, and in their way of looking at relations between church and state. We welcome the German and the Irishman who becomes an American. We have no use for the German or Irishman who remains such... [b]He must revere only our flag, not only must it come first, but no other flag should even come second[/b]."

None of these that I've listed are anywhere near Liberal positions today.

The idea that the American Progressive movement of the late 19th century is in anyway similar to the so-called re-labeled Liberals today who call themselves Progressives is insane. They are like night and day.

One great example that the Progressive Movement of the late 19th Century is different than the so-called Progressives of today is that during the TR's time Progressives sought to enable the citizenry to rule more directly and circumvent political bosses.

Read Theodore Roosevelt's speech that he gave in 1912 pertaining to "The Rights of the People to Rule" and tell me if it is the same as the Liberal Left's agenda today? It isn't.

"Are the American people fit to govern themselves, to rule themselves, to control themselves? I believe they are. My opponents do not. I believe in the right of the people to rule. I believe the majority of the plain people of the United States will, day in and day out, make fewer mistakes in governing themselves than any smaller class or body of men, no matter what their training, will make in trying to govern them. I believe, again, that the American people are, as a whole, capable of self-control and of learning by their mistakes. Our opponents pay lip-loyalty to this doctrine; but they show their real beliefs by the way in which they champion every device to make the nominal rule of the people a sham. I have scant patience with this talk of the tyranny of the majority. Wherever there is tyranny of the majority, I shall protest against it with all my heart and soul. But we are today suffering from the tyranny of minorities. It is a small minority that is grabbing our coal-deposits, our water-powers, and our harbor fronts. A small minority is battening on the sale of adulterated foods and drugs. It is a small minority that lies behind monopolies and trusts. It is a small minority that stands behind the present law of master and servant, the sweat-shops, and the whole calendar of social and industrial injustice. ...

The only tyrannies from which men, women, and children are suffering in real life are the tyrannies of minorities. If the majority of the American people were in fact tyrannous over the minority, if democracy had no greater self-control than empire, then indeed no written words which our forefathers put into the Constitution could stay that tyranny.

No sane man who has been familiar with the government of this country for the last twenty years will complain that we have had too much of the rule of the majority. The trouble has been a far different one that, at many times and in many localities, there have held public office in the States and in the nation men who have, in fact, served not the whole people, but some special class or special interest. I am not thinking only of those special interests which by grosser methods, by bribery and crime, have stolen from the people. I am thinking as much of their respectable allies and figureheads, who have ruled and legislated and decided as if in some way the vested rights of privilege had a first mortgage on the whole United States, while the rights of all the people were merely an unsecured debt. Am I overstating the case? Have our political leaders always, or generally, recognized their duty to the people as anything more than a duty to disperse the mob, see that the ashes are taken away, and distribute patronage? Have our leaders always, or generally, worked for the benefit of human beings, to increase the prosperity of all the people, to give each some opportunity of living decently and bringing up his children well? The questions need no answer." (Theodore Roosevelt, 1912)

This sounds more like Tea Party Conservatism than it does 2011 Liberalism.

This sounds like all of the reasons that the November 2010 Elections turned out the way they did. 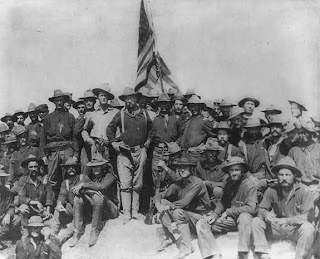