My Wife Gets Her Horse

It was 7:30 Friday morning when my brother showed up with two horses. One a 15 year old Arab and the other a 2 year old Quarter. Both good looking, even tempered, and both needing a home.

So how did they get here? In this economy when people are getting rid of their horses because they can't afford to feed them, why two more horses here? Well, it all started about about ten years ago.

That was when I started taking in unwanted and neglected horses.  Even then I was making friends with people who couldn't afford to keep their horses.

It wasn't hard to get them here. It was always the same routine.  Someone would say something about a horse that was "free" and an owner in trouble, and I'd be in my old Milley trailer and down the road I'd go.  Thehen when I get there, I really couldn't say no.

The first two years I picked up quite a few horses, but I did find good home for most. Of course there are those that are just going to stay and hopefully enjoy their retirement here.

Of course my brother showing up with two more is not that crazy really.

There are crazier things.  On one of my brother's trips to California from the Big Island of Hawaii, it sort of got a little crazy for me.

My brother had an appointment at the Veterans Hospital in Palo Alto and needed me to pick him up at the airport in San Jose. He was flying in from Hawaii and it was an appointment that was six months in the waiting. The appointment was at ten that morning and his flight was supposed to come in to San Jose at six. All this meant that I needed to leave my home in the Sierra Nevada Mountains at three to be there on time.

Well I picked him up at almost eight because his plane was late and we headed for Palo Alto. There is nothing like driving in city traffic when you haven't done it in a long time. Yup, nothing like it at all.

Two trucks that had never seen a dirt road or a bale of hay nearly took off my back end while trying to pass me. A small car named something that looked like it belonged on an Italian restaurant's menu nearly clipped a big rig driven by a guy with a turban. All the while my brother screamed obscenities at everyone. It was shaping up to be a rough morning.

Before leaving home that morning, if 3am still qualifies as morning instead of the dead of night, I had helped give birth to a foal from a mare that had a rough time of it. By the time I got my brother to his appointment, I was tired, hungry, and knew for certain that I thanked God for where I live. Yes, even at 5am in the morning the traffic in the San Francisco Bay Area is nuts!

The Sierra Nevada Mountain range stretches from Oregon to Mexico and is as beautiful as places come. My little part of it is a place called Glencoe with a population of 189 that sits about in the middle of the Sierra's in California.

This is the Gold Country! The place where the 49ers, the 1849ers, came to California in the first place. And right then sitting in traffic after his appointment heading out of the San Francisco Bay Area, my mind couldn't help but wonder how many cars we had in Glencoe compared to how many there was on the freeway that day.

My brother was as hungry as I was by the time we got to Livermore, so we stopped at a place that I used to go to when I was living there. The gals who worked there were gone so like a lot of places it just didn't feel the same when something's missing. Then my brother came up with a good idea. He wanted to know if the Rough Stock was already at the rodeo grounds for that weekend's rodeo.

After we dropped on by the grounds, we saw that they were there and that the Rodeo Mixer was on for that night. The Mixer was a combination of cowboys and greenhorns who get together a few nights before the rodeo to share a night of BarBQ, drinks, dancing, and greenhorn penning where the local Rotary Club members can get their pictures taken on a horse.

The BarBQ was great and I got to see a lot of old friend. ...

I bet you're still wondering about where this is leading considering it's a story about getting two more horses?

Well during the dance, and yes I was still dressed in my old carhart jacket which yes did have some blood on it from that morning's birth. And while I wasn't up to dancing, an old lady friend had a different idea and grabed me for a Two Step which I quickly remembered.

Then in the middle of this two step I see this very pretty gal sitting there by her self tapping her foot to the band The California Cowboys who were on their game that night. I made mention that she was pretty and my old friend told me to ask her to dance and the next thing you know I was asking her for her phone number at the end of the night. She was as she still is, and that my friend is a very good lady.

We talked on the phone for the next month and she came up to visit, and yes we dated for a while. During that time I asked her to go riding with me, and we did. But the horse she rode was Ol' Mac and he was getting older daily. While he was truly what anyone would consider "Bomb Proof," the problem was that he was also arthritic.

That gal that I met during the Rodeo Mixer married me five and a half years ago, and I've been blessed ever since. The only slack in the rope that we call our life is that three years ago Ol' Mac had the hardest time getting shod, and after talking with the shoer we agreed that his riding days had ended.

If there is one thing that I have learned in my life it's that you should never promise something that you can't produce. Seven years ago I promised a nice gal that we'd be able to ride together. Three years ago that stopped just when she was in the middle of learning to ride.

Part of the reason that my wife and I haven't rode together is that I've been pretty hard head steadfast about her first horse being another "Bomb Proof" older horse.

When I got Mac, I got lucky. He was a horse that anyone could ride. It never mattered if it were kids, old folks, or even a nice gal from the city. When it came to pleasure riding, Mac was always nice to have around and available. For the last three years, I just haven't had a horse like him that I would be able to trust with anyone atop him.

Well the other day, my brother and his wife gave such a horse away. When he told me about it, I said that it was too bad that I didn't know about it because it sounded like a horse that would be perfect for my wife. Then two days later, the people that took the horse said that they were having money trouble and couldn't keep the horse after all.

So friends, we now have two more horses around here and that's how my wife got her first horse. Fact is that horses are always coming and going in life, and now my wife will start experiencing the joy of being able to hook up with one of God's great gifts and really enjoy the time she has with her.

From all that we can see over the last three days, her new mare's name is Tango, and I really believe that she'll make a great riding companion for my wife who is just starting out with horses. 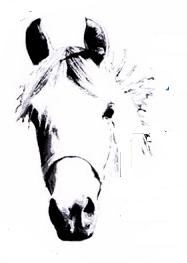