So Where Would You Hide A Deer?

So where would you hide a deer? My friend with the deer had a problem, pointedly an out-of-season buck. What he told me was something that I would have never thought of doing.

Actually in the days when I was hunting and hunting was a religious experience, I would sometimes go without taking a shot after searching all weekend for a legal deer. Unlike a lot of other parts of the country, California's terrain of thick woods and hilly country can make finding a deer sort of tricky. So most of us hope that luck will be on our side when hunting season rolls around. Sometimes it is and sometimes it isn't!

There was one winter back in the early 1990's that I worked up in very unfriendly Monticello Minnesota for a few weeks. I was only there for a little while working at the power plant during an annual planned outage.

Driving to the plant was always interesting because snow was coming down very heavily and none of the native population acted as though they ever drove in snow before. I'd never seen so many people spin out in my life. It was incredible to watch.

Yup, outside of the plant was colder than a polar bear's backside. And yes, inside wasn't much better. Inside the plant, almost no one was at work. I wondered why for a few minutes before a guy walked by where I was working, so I took the opportunity to ask what was up with only having a skeleton crew on duty?

"So tell me pard, where is everyone?" I asked while hoping he was different than everyone else that I had met in Minnesota.

"You must not be from here, right?!" he said completely dashing my hopes that he was different as soon as he opened his mouth.

"Right!" I admitted to him. "I'm not a local. I'm out here from California. So where is everyone?"

"Ah California! It figures! Out here men hunt! Today is the first day of Deer Season! No one works today if they can get it off. I'm out of here later," he answered.

Thinking that he might be nicer if I told him that I hunted also, I was wrong as soon as I asked, "I deer hunt in California, so tell me, how tough is it out her?"

"What's tough about it? The deer are brown and the snow is white! I shot one yesterday outside my bathroom window. I bet you never shoot one just after ...."

Just then the noise of the plant picked up and I really couldn't hear what he asked, so I just shock my head no and went back to what I was working on.

Now friends I can honestly say that up until that point in my life I'd never met anyone who has taken a rifle to the bathroom with them or has ever shot a buck from their bathroom window, either standing or sitting.

Over the years I've been told a lot of hunting stories, some funny and some strange. I remember a friend telling me once how he was still in his sleeping bag when a big old buck walked through his camp. Another friend once told me about a deer he shot on a slope across where he was only to find out that the downed buck was actually on the other side of a river unknown to him. I remember him saying how he had a heck of a time getting it across and what a pain that was.

Then of course there are those people who've told me about shooting and loosing this or that deer after taking their shot.  Most say they'll never know whether they missed it, or whether it was just wounded and the deer disappeared in the thicket.

Knowing the guys who've told me this, I can honestly say that they probably missed.  Poor shots as they were, it wouldn't surprise me.  I know some guys who can't shoot real well unless the buck is big and close, almost standing right in front of them. Other than that, they probably couldn't hit it even if they were using a rifle. And God knows how they'd be with a bow?

So friends over the years very few hunting stories surprise me. And now with times getting tougher with gas prices at almost $4 a gallon again, and of course food and especially meat prices climbing as well, I personally don't have too much of a problem with someone taking a deer out-of-season to feed their family. To feed their family makes it OK in my book.

I'm not advocating poaching or breaking any laws, especially to the extremes that some people do break the law. I'm talking how I can understand how someone can take a deer because of economic hard times out of necessity to feed your family. I believe there is a difference.

You can call me wrong, or whatever else, but I can't help but wonder how many other folks out there understand and maybe agree with what I'm saying here. It is a man's first responsibility in life to provide for his family. So for me, hunters taking a deer out-of-season these days just doesn't surprise me one bit.

Maybe that's why when my friend was talking about shooting this buck, and just how terrified he was that a Game Warden was going to come down on him like a hammer, I understood both the reason he took the deer and how he'd have good reason to be so concerned.

Game Wardens have a lot of authority. If a Warden finds that you weren't within the Law, then a Game Warden can fine you, confiscate your gun, and even jail you.

So when my friend told me that as he was opening his front door that he heard a police siren closer than he'd like and that he panicked, well I understood real well how he could have gotten a little rattled. Then when he said that after hearing the siren that that made him run over to his truck and grab up his deer and he decided to hide his deer in his house somewhere, well I have to admit that that was new!

But friends, when he said that he hid that deer in his shower with the water running and the radio on just in case the Game Warden came knocking on his door, well my friends what can I say that's definitely something you don't hear about everyday. 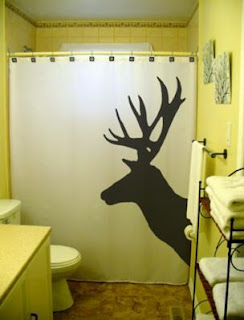