This is unbelievable and if I hadn't checked it out for myself, I wouldn't believe it.

The annual Martin Luther King Jr. observance at the state house in Columbia, South Carolina, had an interesting twist this year. The event was held on the north side steps of the Statehouse on Monday, January 17th.

It does not matter to those people that George Washington is the Father of Our Country, nor does it matter to them that our freedoms were bought and paid for by Washington and other men like him over 200 years ago.

It obviously did not matter to the NAACP organizers who had a "box" built around that statue just how offensive their actions are to the rest of America.

Martin Luther King Jr. said, "I have a dream that my four little children will one day live in a nation where they will not be judged by the color of their skin but by the content of their character."

Actions like building a "box" around a statue of George Washington so that "they" wouldn't be offended by Washington's presence might seem childish and ignorant to some. Maybe it is that? But it does make me wonder if those people from the NAACP truly understand what King was saying?

Probably not, but that doesn't matter because even their stupidity and ignorant behavior can't make up for their disgusting actions.

And after all, I don't judge those people by the color of their skin but instead I judge them as I do all people -- and that's by the content of their character just as Martin Luther King Jr would have wanted.

And yes, their character is just shameful. 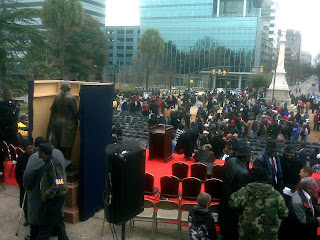