Emergency Preparedness: Are You Ready?

Talking with a old friend the other day, the conversation swung around to the poor people in Japan who were hit with both an earthquake and a tsunami. We talked about them and how it was for many folks during Hurricane Katrina.
And of course, we talked about us being prepared in case of an emergency. 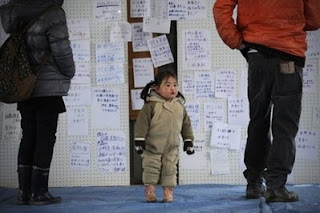 We talked about how I keep gas on hand for my generator to run my pumps for my wells, food on hand in our pantry, wood for my wood stove, and of course extras like lanterns and a portable camp stove.

So if there were an emergency where services like phone and power was interrupted, we'd be OK.
Then he brought up the worse case scenario of another attack like 9-11, and the even worse aspect of multiple attacks all at once in a few different cities around the country.

An attack like that would possibly throw panic across the entire country and bring our nation to a halt. But I don't know if it would happen that way. The reason I'm skeptical is because I remember that unlike the people who were directly affected by the attacks on 9-11, my family was not affected other than angered.

I think if there was some sort of a huge attack type of situation, then I can see people flooding out of the cities to try to get to higher more isolated protected ground. I can see huge problems along the way.

Look at Hawaii and take a look at what was happening while they were preparing for the tsunami to hit them. There were reports of people hoarding everything off the shelves in the super markets and fights breaking out over people trying to fill up their cars at gas stations.

The best and worse in a person's nature comes out during a crisis, real or not. In the case of Hawaii and the tsunami, it was a great drill but that was about it. And yes, there are things that people there might want to do in the future to be more prepared.

As for my family, well we live in the Sierra Mountains in a remote "town" of 189 people located at 2800 foot elevation. So all in all, I'm not worried about a tsunami or flood of any sort. And yes, really, we're not exactly the number one target for terrorist or a nuke attack.

But if something did happen down below in the cities than yes I can see this area getting a whole lot of people coming up here.

Besides not being able to accommodate everyone, the biggest problems during any crisis is the medical needs. People with chronic illness and those who need immediate care will need help. And then there are those who need medications everyday, they are dependant on medications.

Homeland Security advises everyone since 9-11 to keep at least a 30 day supply of your medications on hand just for emergencies. For me, I keep two months supply on hand. After all, better safe than sorry.

For the short term, meaning a few days to a couple of weeks, I think everyone would be fine after the initial panic. Once services are restored people have a tendency to calm down some and act more civilized.


If it were a long term situation, well then things become different don't they?
All of a sudden my short supply of gas to run my water pumps for my wells might not last. So water becomes an important issue. Luckily I have a hand pump on one well, so at least we will have water.


And yes, since 9-11, I've been thinking about this more and more. So one of the things that I've been working on lately is putting in an Off The Grid Solar/Wind Power system to run my two wells and part of my electrical needs. It would be nice to have this place as self-sufficient as possible.
Then there's food, and how long can your pantry hold you until you need more food. All of a sudden you start thinking of ways to feed your family. For me, I try to always keep at least 50 pounds of rice on hand.

My grandfather used to say, "if you have rice, you won't starve!" And he'd know, after all he endured the real hard times of the Great Depression and the strict rationing during World War II in Hawaii when a lot of things were in short supply.

But as for other food, my wife cans and bottles, and yes she gardens. We also have stock and a lot of game that comes through our property. Because our home is located on the edge of thousands of acres of forested wilderness, when I say game, I mean deer, turkey, fox, bob cats, coyotes, mountain lion, and even bear.

Now as for a threat from the lousier side of human nature? Well, like everyone up here, I have guns and some ammo in reserve. But more important than having truck loads of ammo, and no I'm not saying that that is a bad thing to have, is that we support each other around here.

My neighbors and I have already talked about what would happen if something big did take place and people started flooding in these parts. We figure that we'd gather up, then link up with others in the area for mutual protection and survival.

One of the nice things about living in rural America is that my neighbors are all like minded people.

Since we're in the hills, imagining that the County Sheriff and Highway Patrol would probably have their hands full, I would think most folks up here wouldn't have to travel to town until things settled down.


Other than duties relating to a Citizens Group made up of neighbors, the safest thing to do for most folks would be to bunker in and stay away from the problems as much as possible. After all, with an influx of people comes problems. Everything from traffic problems and congestion, shortages of gas and food, to tempers and thieves.

And like what some people in Hawaii just experienced, people can get nasty.
The hope of course is that laws won't be broken. But if the law did break down to a certain extent, then a Citizens Group would be able to help maintain the peace until the proper civil authorities can get a better handle on things and regain control of the situation.


That is of course is thinking that there is a civil authority, and not like what happened in New Orleans during Hurricane Katrina in 2005. Almost half of the entire New Orleans Police Department abandoned ship and quit just when everyone needed them. 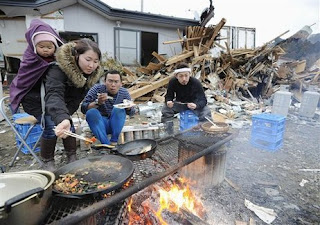 Yup, they just walked off the job. Imagine that!
So even if that happened, we have to look at that problem as just another hurdle that we have to get over.

A fact of history is that people have been creating societies with the enforcement of laws since time immemorial.
I don't think that we can be ready for anything and everything that could possibly happen.

Since we can't, I really believe that it comes down to the basics of preparedness geared to where we live.

For example, where I certainly don't see a flood as a problem living on a mountain top, I do see forest fires as being a very real threat for us where we live.
Knowing this is the first step to making an honest assessment of things that I may need to worry about.  And of course, while having a realistic understanding of the threats to my home and property, I also need to keep in mind that being prepared for an emergency is my responsibility.
We have to do for ourselves.  And to see what the government recommends for all Americans, Homeland Security has published their 30 Tips for Emergency Preparedness:  http://www.dhs.gov/xcitizens/editorial_0711.shtm


We have to remember that we survive crises all the time.  In the short term for certain, but for the long term as well. Granted the long term would be tough, and it would certainly be tougher on those who are ill-prepared for an extended emergency.
The first rule of survival is to want to survive. Once that desire kicks in, then we can certainly do it without too much of a strain on civilization. Because of desire, I really believe that we can survive almost anything short of an act of God.

The key is to want to. If you want proof, all you have to do is look to those who survived Hurricane Katrina the best they could in comparison to those who waited for the government to take care of them. 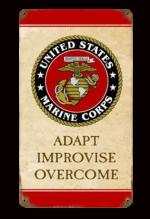 Instead of evacuating early, some waited for help and died.
Those who use their head, keep their cool, think positive, and do for themselves have a better chance of survival than those who don't.
How, you ask?  They adapt, they improvise, and they overcome.
Yes, I know it's the Marine way. But I also know from personal experience, that it really is the Cowboy way as well!
Story by Tom Correa
Posted by Tom Correa at 5:58 AM