A county representative from the Office of Fair Employment drove out to a ranch one day to talk to the rancher about rumored fair employment infractions. The county man confronted the rancher and said, "I'm from the county and it has come to our attention that you may be treating some of your employees unfairly. Who do you have on your payroll?"

The old rancher looked the government worker up and down, then said, "Well, I have one full time hired hand that I pay $300 a week. His room and board are free. He works from 7:00 to 5:00, Monday through Friday, and he gets his weekends off. He deserves it. He is a hard worker."

"Well he doesn't sound like he has it bad at all. Do you have anyone else working here?" asked the county agent.

The old rancher scratched his head slowly and nodded, "Well Sir, yeah! I've got this one guy who's mentally challenged. Not real bright at all. Hardest worker around here. He makes about $10 a week. He pays for his room and board. His back aches. His knees are bad. He's been horse kicked more times than he'd like to recall, and the fact is that he'll never be able to retire. Besides the manual labor, he keeps the books and he jungles the funds so that this place stays in business. He works seven days a week, which means that he does everything when the so-called Full Time hand ain't around. He works from 6:00 in the morning to around 7:00 or 8:00 at night. Sometimes he works later than that. But other than having a great wife, and yes he occasionally will take a sip or two of whiskey on the weekends, Sir, he is plum wore out!"

"Other than a sip of whiskey, he sounds like he's being treated worse than a slave!" exclaimed the agent. "That's the man I want to talk to!"

"You are, I'm the Owner!" said the old rancher with a sigh. 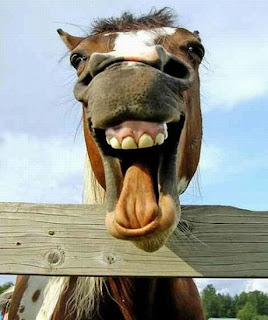