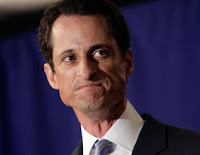 OK, so what's the big surprise about Rep. Anthony Weiner, the Democrat Representative from New York?

Heck, I thought Weiner had something wrong with him long before his recent problems with him being exposed so to say for posting lewd pictures on Twitter to several women - including a minor.

I remember not knowing who this extreme Left leaning Liberal weiner was until March 16th of this year.

How do I remember that it was March 16th, because I remembered it and looked it up again to make sure that I had the right day. That was the first time that I really heard of him.

Weiner was on Fox with Sean Hannity. Hannity was trying to get some straight answers out of Weiner when he was on the show alongside Rep Michele Bachmann, Republican Representative from Minnesota, to debate our out of control Federal spending and budget problems.

During the program, it was very evident, right there in front of everyone to see, that Weiner had problems. He was extremely combative and arrogant, very sarcastic, and straight up dishonest.

It took less than a minute for things to get heated up. Things got out of hand and extremely personal when Weiner mocked Bachmann during the debate. Then Hannity and Weiner went head to head.

During their debate Hannity admonished Weiner for spending too much of “our money.”

Weiner, like most Democrats in Washington, sees "our many" as his money to spend.  The money that Americans pay in taxes has never been designed as a blank check for anyone. Out taxes go to our "needs" and not to "luxuries" that we can't afford - like say giving Billions of dollars to Muslim countries who are oil rich just so they will be our friends. But that's another subject for later.

On Hannity, Weiner went into the same old diversionary scam that Liberal Politicians pull when they've been confronted with facts and they can't fight back.  Immediately he started in by saying that it was Bush's fault, Bush this and Bush that, it's the fault of the rich, and so on and so on while pulling out all of the standard Liberal Bumper Sticker witticisms that they seem to always resort to when they have no facts to back up their arguments.

That was when Hannity called Weiner, "A partisan hack!" And then went on to tell Weiner to, "Stop it!”

The first thought that hit my mind was, where did that come from?  What did that mean? What is this guy thinking about here? Honestly, I just didn't get it.

Then I realized that Weiner was really such an arrogant self-absorbed Liberal that he was actually trying to take a shot at Hannity's Irish roots to divert the subject. Imagine that.

Weiner's known for his sarcastic tone when debating Conservatives, but lately his sarcasm as been replace by insincere pleas of understanding. Why, because he's been outed for having sent X-Rated pictures to women on Twitter. And yes, including a minor.

First he denied it, then he lied about it. After that he tried to dismiss it. Now it seems he's asked for understanding as he's sought coaching from Bill and Hillary Clinton. Imagine that for a moment!

No matter what Bill and Hillary Clinton say to help him, now Weiner has bigger problems. Instead of just being exposed for his unethical behavior of lewd acts, now the Police in some jurisdictions where some of those women reside are now looking into the possibility that Weiner as actually committed crimes.

And while the Police are on Weiner's trail, Weiner is dismissing calls by Democrat Party leaders for him to resign over this sex scandal.

Instead, Weiner is now saying that he's taking "a leave of absence" and checking himself into a clinic for treatment. Sounds like something out of the Tiger Woods' Handbook of Excuses for Rotten Behavior.

And by the way, treatment for what? Mental instability? Irrational behavior? Perverted acts of lewd and lascivious behavior? Sending sexually explicit material to a minor? Are these treatable "medical conditions"?

These are not "medical conditions!"

Lewd and lascivious behavior occurs when a person commits an indecent act of sexual gratification. Weiner sending unsolicited e-mails and twitters containing obscene material or sexually explicit conduct is unlawful in most States. Especially if that material is sent to a minor.

I do not believe that Weiner's actions are the result of some sort of a "medical condition."

I believe that that's a ruse, a clever subterfuge, it's a scam to divert the truth and hide behind a lie. Reckless, indecent, unethical behavior on behave of a member of our government should not be put up with.

It shouldn't be put up with by anyone anywhere. No matter if it's the Mayor or the Chief of Police of a small town, a Tax Collector or a Judge, the U.S. Attorney General or one of the President's many unelected Czars, the President or an actually member of Congress, Americans don't need poor judgement and shoddy behavior in our city, state and federal governments.

Dishonest or reprehensible actions have no place at any level of our government.

Weiner was elected to a position of trust and responsibility. He was elected to do the work of a representative of the people. The people voted him into office, no different than a Mayor or Counselman. But in this case, as a member of Congress, he also represents all Americans.

This whole issue has to do with reckless, indecent, unethical behavior in a position that demands that good judgement is essential. Sane and rational thought processes are a must.

If he is metally ill, than he has no place in Congress voting on issues that affect our taxation, our economy, our defense, our medical needs, the Nation's energy policies or our forgien policies to name a few.

Sane and reasonable people understand sane and reasonable actions. Actions that are claimed to be hampered for reasons that need to be addressed medically have no place in Congress where decisions are being made that affect all of us.

In my opinion, his actions have nothing to do with an impaired mental capacity. If I'm wrong, than so be it and get him out of Congress now!

But honestly, my opinion is that his actions are simply an abuse of power by a Politician who thinks that he's above the law. It seems to me that he thought that he could do this sort of thing and get away with it without penalty.  And if so, than get him out of Congress now!

CNN report on Democrat call for Weiner to resign:
http://www.mrctv.org/videos/top-dems-weiner-get-out