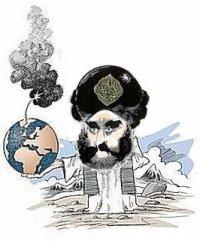 So let's see if I can get this right, some folks out there have a problem with how I see the Muslim faith.
There are some who've read my article on the 9/11 Cross.  They read what I wrote about what I've learned about the Muslim faith, and subsequently they pretty much know how I've come to my conclusions about Muslims.
They read about how I, like other Americans on the West Coast, woke up to the horror of Muslims crashing jet airliners into some of the tallest buildings in the United States.
They read my article and see that I didn't really know anything about their God-forsaken religion prior to their acts of Suicidal Mass Murder on 9/11.

They read about what I learned from that day, 9/11, in that this is a pattern for men in the Muslim World.  They read that I'm amazed that these people obviously love blood and murder.  They read how I am appalled that Muslims sacrifice their children, their sons, the daughters, as suicide bombers.

This all seems pretty easy.  I laid out my case, and said why I see Muslims in general as the heartless folks that I think they are.

I make the case that, since 9/11, after reading headline after headline, watching the news, and yes just staying abreast of what Muslims are doing around the world, that I've come to the conclusion that Islam is a sick religion absorbed with a sort of Blood Lust existence.

I really believe that Muslims do not treasure human life of any sort - not even their own. From what I see, Islam is more like a cult, and that's the way Muslims want to keep their faith - ie: Barbaric and Bloody!

What was my evidence?  Well, of course there is 9/11.  But besides 9/11, what else could make me think that Islam is a "Religion of Death"

This is only a small sample of what Muslims are doing out there all in the name of Allah.  It's no wonder they have some of these other countries frightened.  These people live to kill, and they apparently love it.

Some readers who read this refuse to take facts like this into consideration.  Believe it or not, there are readers out there who are writing me to say that I'm "filled with hate!"
I know that there are people who are offended by my bringing out these facts.  And yes, these are easily researched facts.

But instead of facing the facts of what their barbaric religion is doing, they write me threatening letters and say that I'm the "voice of hate," or that my articles "are pure unadulterated hate."
Imagine that!
Hate, from me? No, not really.  Just the facts actually.  You see if we want to talk about "hate," then why don't we talk about the Muslim hate crimes that don't always include murder and mayhem - like say Islamic religiously sanctioned rapes and beatings and mutilations.

How about the Muslim problem in Australia?   In Sydney, Australia, Muslim crime has just about pushed out the Asian crime organizations in Sydney.  To make things even worse, they've had a real problem with Muslim gang rapes.  And honestly, I don't know if its really stopped.
Yes, these were Muslim serial gang rapists who attacked in groups of up to fourteen or more Lebanese-Australian men.  Their attacks were carried out exclusively against White-Australian women and teenage girls who were as young as 14 years of age.
One report called them "predatory Muslims" because they were like savage dogs.  Rabid, they needed to be killed.

The leader of these bastards was Bilal Skaf, who only received a sentence of 25 years after his appeal.  And if that's not bad enough, believe it or not, lately a Muslim spokesman has said that the women were at fault, deserved it, and that Australia should "honor" the son-of-a-bitch.  Imagine that!
And no, this Muslim crime problem is not just restricted to Australia.
From what I've read, from Norway and Sweden and down through the rest of Europe, the majority or rapes committed are by Muslims from Africa and other Third World countries who specifically target Western women for rape and beatings - and yes, even mutilation.
Even in Egypt's ancient Christian-Coptic community, the so-called "religion of peace" is condoning the gang rapes and mob violence on Christian girls there.
So now, knowing these facts, how can anyone not call Islam a religion of death, hate, and blood?
OK, let's try again, so other than the Muslims and their supporters who have read my articles and will undoubtedly rise to defend Muslim crimes against humanity, how can others not see my point in that Islam is evil.
As for me, well since my 9/11 Cross article where I call Islam and Muslims as I see them, I have been getting some interesting hate mail from some folks who I figure are either Muslims or Muslim supporters.
I received this e-mail comment from one Jerkweed, who says, "coward, absolute coward. would love to see you deliever these psychotic words in person, and not behind a screen. Just another redneck American. Go clean ur rifle, then clean ur brains with it."
What a Jerkweed huh? And this is a nice one!
Well, I don't know if the Jerkweed who wrote me that note is from here or from overseas.  Fact is, it doesn't really matter. It doesn't matter because where ever he's from, he's full of shit.

But besides that, friends, in this country we don't like being threatened or talked down to.  If the Jerkweed who wrote that would have the cojones to put his name to it, then I'll be glad to write a response to the Jerkweed.  I'll even keep it to single syllables so that the Dumbshit can understand it.
You see, with all of the evidence that I've listed, if the Jerkweed still can't understand that his religion is killing folks for fanatical reasons - well then, he is a Dumbshit!
He obviously doesn't understand that people can only go by what they see.  And Jerkweed, if you're reading this, all I see from these random killings is a bunch of low down yellow cowards who seem to glory in the act of terrorizing others.  Maybe in some perverse way, they get some sort of gratification from it?
I don't think all Muslims are the same, but I think the crazies who follow the Quran and desire more and more blood are all mouth about wanting peace.  I think you're all mouth about being men of honor.  I think you use any excuse there is to terrorize the people who fear you.
But all in all, I think their time is short.  I really believe that the world is pretty tired with their act.  It's gotten old.  Less and less people are afraid of Muslims these days.  If you're a Muslim terrorists, and yes if the shoe fits than this goes for you too Jerkweed, I think your days are numbered!
The world is not going to put up with the Jerkweeds of the world for too much longer.  Their days of hate and murder are coming to a close.

It might not be this year or next, but just like Hitler's fanatical Nazi regime, or the Communists threat to enslave all nations, or on a smaller scale like those 909 crazies of the People's Temple who all committed "revolutionary suicide" at the same time in Jonestown, Guyana, I see Muslim terrorism also ending up on the trash heap of history.

But, I'm sorry to say, I believe it will only happen when good Muslims stand up and take back their religion. Maybe then they can rewrite some of its principles to reflect that "religion of peace" that they're always talking about, but no one sees.