One of My Favorite Statues - The Frontier Marshal 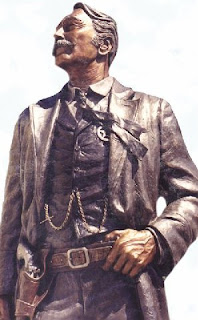 There is a great piece of art located at the United States Marshals National Memorial in Fort Smith, Arkansas.

The statue is called "The Frontier Marshal."

Until recently, I didn't know what the full story was behind the statue.

This is from the website of the U.S. Marshals Service. I hope that you're as impressed with this piece of work as much as I am.

For the commemoration of the Bicentennial of the Marshals Service, a larger-than-life bronze sculpture, it is titled the "Frontier Marshal."

It was donated to the Marshals Service by famed leathersmith John Bianchi, who is a member of the original U.S. Marshals foundation Board of Directors and founder of Bianchi International which is a holster and sporting equipment manufacturer.

He went on to say, "The sculpture thus seems a fitting symbol of the dedication of Marshals and their Deputies during those two centuries, and reminds us of the self-sacrifice and dangers so often associated with upholding the law."

The 10-foot tall work of art was created by Dave Manuel of Joseph, Oregon, a widely acclaimed painter and sculptor of western themes.

The bronze portrays a confident, very dignified U.S. Marshal.  In one hand, he holds a 10 gallon hat and what appear to be court papers.  The other hand rests on his gun belt, as his long duster is blown back just far enough to reveal the pistol in the holster on the gun belt.

His face in the wind, looking into the distance, he'd do the big job ahead of him.