America is a Christian Nation

If not by law, then certainly through practice!

Poll after poll after poll, research all concludes, fact is fact, Americans believe in God and are Christians.

Liberal Atheists try to disprove it. But it's the truth: approximately 90% of all Americans say they "believe in God," and of those Americans approximately 80% of them are Christians.

And how do Americans identify themselves by Religion, well the chart to the right is how they answer.

Eight traditional religions such as Buddhist, Hindu, Jehovah's Witness, Muslim, Orthodox, Other Christian, Other Faiths and Other World Religions constitute less than 5% of the population in nearly every state.

In the United States, we have a total of 1.6% of our people who've declared themselves Atheist. Another 2.4% are Agnostic.

These are some interesting numbers when we consider that in the United States of America, there are 2,454,000 Muslims which means that they are 0.6% of the American population.  In Great Britain, there are 1,647,000 Muslims, a full 2.7% of the population there.

So why does a nation, that has about 80% of its people claiming to be Christian, surrender its religious freedoms and rights, like openly displaying ornaments or nativity scenes, to the 1.6% who are Atheists and the tiny population of 0.6% who are Muslims?

How does a nation that is predominately Christian find Judges willing to make rulings using Muslim Sharia Law when Religious Law of any sort is in itself illegal to use in the United States under our form of Government?

And we're not alone, if you think this is only happening here in the United States, Great Britain is on the road of a two-tier justice system - Civil and Religious - by openly observing the radical Muslim laws known as Sharia Law.  It is insanity!

And yes, the Brits don't seem to care enough to rid themselves of this new black plague which is attacking all of Europe, one country at a time!

So how can a small percentage of Muslims rule over the rest in Britain?  How does a nation lose its guts to fight for the religious principles that has given it strength during the hardest of times?  How does a great nation like Great Britain lose it's desire to stay free and observe its own set of laws?  Why has Christian Britain turned it's back on the core basis for it's rules of law?

We should learn from what is happening in Great Britain.  We should learn what happens when we elect people who work contrary to the basic best interest of their people.  America's Christian heritage should not be forgotten.

President John Quincy Adams, our 6th president, said, "The greatest glory of the American Revolution was this: It connected in one indissoluble bond, the principles of civil government with the principles of Christianity."

We, as a nation, did not turn to the laws that guide the Christian Church, Canon Law, but instead used Christian principles to guide our hands when writing our laws.

The first being the Golden Rule: "Do onto others as you would have them do onto you." And the second, "Do not seek revenge or bear a grudge against one of your people, but love your neighbor as yourself."

As Christians, our Founding Fathers agreed on the value and dignity of human life, the need to recognize the works and needs of the individual, the value of human labor, and on our ability to gain happiness while being charitable toward the next person.

They understood the parable of the Good Samaritan,

He, who is your neighbor, the Good Samaritan.  He who helps a stranger and asks for nothing in return.  He is derived from the parable that Jesus Christ told the young lawyer.  Today many hospitals and charitable organizations are named after the Good Samaritan.

Our Founding Fathers were realist and pragmatist, they knew Civil Law and one's obedience to those laws must depend on ones sense of right and wrong.  It is from our Christian heritage that we understand the teachings that enable us to have the proper understanding of what is right and wrong.

American Christians understand that God expects us to use our intelligence.

According to the Holy Bible, God says, "I will instruct you and teach you in the way you should go; I will counsel you and watch over you. Do not be like the horse or the mule, which have no understanding but must be controlled by bit and bridle" (Psalm 32:8,9).

While horses and mules need to be forcibly controlled to get them to respond. Christ expects us, however, to use our intelligence and ability to reason. this is the difference between a Christian nation and a Muslim nation.  One has laws based on the Christian principles of compassion while the other has laws born out of an Islamic code of hate and murder.

Don't believe me? Then just look to the stoning of Muslims for petty crimes, and the mutilation of Muslim women for what is hardy crime at all.

Because Christianity was the guiding factor for our Founding Fathers, we have been a Christian nation from our conception.  It is our identity at our core because it has everything to do with our beliefs as Americans.

Fact is, it is common knowledge that our cherished American values are identical to Christian values. Our founding principles like life, liberty, the pursuit of happiness, our freedoms of speech and religion, all that are enshrined in our nation's founding documents are all based on Christian principles.

Yes, if not by law, then certainly through practice, America is a Christian nation. And yes, our American values, what makes us different from the world, was indeed first drawn from Christian perspectives of how life should be.

And for those unfamiliar with where it started, it was in a far off land long long ago ... 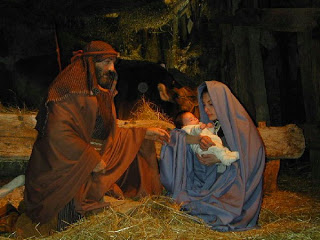