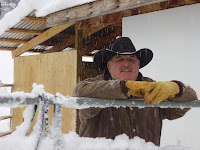 As the years pass, I've found that I don't like it when people try to tell me what to do.
Call me ornery! Call me stubborn! Call me hard headed! Call me tough to get along with, if you'd like, although anyone who knows me will tell you that I'm very easy to get along with.
I like a joke, a good story, even a tall tale is great - I love them all.  But if there is one thing that I don't like, it's someone telling me what I can and I can't say or do.  Even more so, when I know I'm right and not doing anything wrong or offensive.

Granted, in my younger years, I was told once or twice to hold it down during a party with friends. And yes, I still remember that time when I was asked to curb my cussin' when women and children were present. A little embarrassing to say the least, but honestly I'm still sticking to my story that I really didn't know that they were there.

Heck, if I had known, well then I really don't think that I'd have ever used some of the colorful language that I used - even if I was talking with a few other former Marines.

So yes, as for vulgar speech goes, I do try to hold it down.  I'm a big believer in being courteous, most Americans are actually.  Most Americans work to get along with others. Most Americans, contrary to what we see coming out of Hollywood, really are not as vulgar as the movies paint us to be.

And yes, I know full well that many non-Christians also recognize and celebrate Christmas not for the religious aspect but for it's cultural aspect.  Whether the Liberals and Atheist like it or not, Christmas is an American tradition - and yes, along with the rest of the world, Americans celebrate Christmas.

Let me try to explain this so that Liberals will understand it. The vast majority of Americans are Christians and we celebrate this time of year - not because of Winter Solstice or some pagan ritual - we celebrate Christmas to rejoice and remember the birth of Jesus Christ.

It is just that simply really. I say Merry Christmas!  It's no secret that I'm a Catholic, and subsequently a Christian.  We Christian don't stop other from celebrating their beliefs.  We ant the same respect handed to us in return.

That's right! As Americans, we should not be expected to hide our personal beliefs, religious or political, because of the thin skin sensitivities of others who need convincing that we respect their beliefs.  And yes. we should not be mocked or attacked for our religion as well.

It may be popular to attack and make fun of Christians on television and in the movies, in the classroom, in the workplace, in sports and in art, but that does not make it right!

We seem to forget that we are a nation born out of people looking for a place to express their religious beliefs without fear of persecution or prosecution.  It would be a shame to think that a small percentage of liberal atheist in government can assume that they are better than us - and subsequently Lord over the rest of us by imposing their non-believing ideology upon us.

Americans traditionally hate those who think they are better or smarter or wiser than the rest of us. The biggest problem with Liberals is that they fit that bill to a tee!

I say Merry Christmas to everyone so that they too can feel good about the season. And yes, I also say it so that they understand that it's really OK to celebrate the birth of the son of God - he who ultimately died on the cross so that our sins can be forgiven.

I'm no priest or reverend. I'm just an old cowboy, a former Marine, a man who has seen the strength and love that Christ can give when times were hard and troubles surround you.  I'm not preaching, in fact, I've never been able to stay awake through most sermons. Maybe that's why I don't go to church very often.

Fact is that I've see the wonders of God in the mountains and at sea, atop a horse in the back country and moving cattle, and holding a new nephew and niece. I've seen God's wonder when I visited New York City and visited the Statue of Liberty and went to the observation deck of the Empire State Building.

I've seen the wonder of God in the faces of people like Doctor Alabama who recently treated my leg, to the young women on stage who sang their hearts out last night in the play I attended, and yes in the sound of a crying child who wakes hungry.

I'm an American, I say Merry Christmas because it is my right and I am free to say it.  Not only because it irks Liberals to hear it being said, but mostly because it has a bigger meaning then they realize. It is a handshake and a smile. It is warmth and something real when said from the heart.

I say Merry Christmas because it is the proper thing to say, and yes, like I said before - I really don't like someone telling me what I can and cannot say.

What gives him that right to do that?  Who gave him the power to forbid others from celebrating their religion in the way that they want to?  I think it is offensive to everyone, Christian and non-Christian alike.

Why non-Christians as well? It's because limiting what your employees can and cannot say isn't right.  It builds resentment and bitterness. And yes, it might only effect Christians and Christmas today - but who and what will it effect tomorrow?

Besides, telling a person, any person, what they can and can't say goes against everything that is American!  It is shameful behavior on the part of management and should not be put up with - by the employees or the prospective customers.

I know that employees have to take it, especially in a bad economy when jobs are hard to come by. But customers don't have to shop at a store that treats their employees and customers without respect.  And after all, it's not a good sign of good management or basic citizenship to refuse your employees the ability to express their religious beliefs in just a few words that are not offensive.

To deny any American their right to excersise their religious freedom is to deny them of the basics of dignity as people. As a prospective customer, I'll take my hard earned dollars somewhere else that respects its employees and me. And just for the record, even if I were not a Christian, I would feel the same way about taking my dollars else where.

Some, like me, also say Merry Christmas because they've realized that it irks Liberals to no end!  It irks them because it says to them that they don't have complete control. They believe themselves to be superior and want to dictate to all of us how we should act and what we can and can't say.

For me, all I can say is that if they think they can tell me what I can and can't say! Well, like Hell they can!

Americans don't do well with Dictators. In all of our history, yes we have avoided having a Dictator as the head of our Federal government. We have avoided them because we have seen the result of their work.

Americans have fought dictators and stopped them.  Americans naturally don't like our freedoms abused and trampled on by anyone, but especially by those who think for some unknown reason that they have some right to tell us how to live.

If you feel the same way, say Merry Christmas and declare yourself free to do so.

May God Bless you and yours during Christmas and all year round!
Tom Correa
Posted by Tom Correa at 7:11 PM