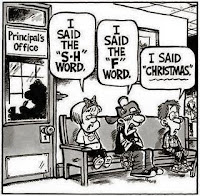 The liberal crazies are loose and attacking anything even slightly related to Christmas!
In Forth Worth, Texas, students and parents are outraged after their school district declared that Christmas celebrations – including Santa Claus - would no longer be allowed during the school day.
Yes, the Fort Worth Independent School District also banned students exchanging Christmas gifts after they determined that public schools could no longer "endorse or sponsor any religious activity or doctrine."

If they can't endorse, then I don't see why the Fort Worth Independent School District couldn't just respect that these Christian children have rights to celebrate Christmas between them and other Christian kids.

Someone had to try to explain the insanity at the Fort Worth Independent School District, so a spokesman for the school district actually had the job of saying the words.

The words? What words? Well the words behind the real reason for all of the blatant attacks on Christians and especially Christmas these days.

You see, the Fort Worth Independent School District spokesman told Fox News that "in an effort to be Politically Correct" - Teachers are not allowed to "post something that would foster or promote or impugn one doctrine or religion over another – or even give that impression."

In Stockton, California, one school is finding itself at the center of the annual war on Christmas debate after teachers were told that they won’t be allowed to display Santa, Christmas trees, or even Poinsettia plants this year.

Supposedly there is a district wide bulletin that was sent to teachers, many have reportedly received it.  It purportedly says that teachers are allowed to decorate with "benign snowflakes and snowmen," as these items "are safe and not attached to religion."

The document apparently read, "District office would like to remind everyone when displaying holiday decorations in and around school to be mindful no association to any religious affiliation i.e. Santa, poinsettias, Christmas trees, etc."


The Claudia Landeen School, part of the Lincoln Unified School District, is a kindergarten through grade eight public school. District Superintendent Tom Uslan explained the reasoning behind the ban, saying that the Lincoln Unified School District believes that since there are a "myriad of religious affiliations at the school we don’t want a pervasive theme of a class to represent one religious affiliation."

Interestingly enough, District Superintendent Tom Uslan claims that there have been no complaints at the school thus far. In fact, the ban went into effect as a pre-emptive attack.

The Lincoln Unified School District decided to ban Christmas for Christian children before there was even a single complaint.

Imagine that! They banned Christmas for their Christian students even though it hasn't offended anyone! Does that sound like good management? Not to me.

A spokesperson for the district, though, denied that a letter or communication had been sent to teachers, but did say, "There was a conversation to encourage administrators that each of our employees should enjoy their religious freedoms but we don’t want to have a pervasive theme of a classroom or public office to represent a specific religious affiliation unless we are formally teaching topics regarding those affiliations."

So the question becomes, with that said, does that mean teachers can decorate their classrooms with Santa Claus and poinsettias? The short answer is no!

Fact is that regardless as to whether a letter was sent or not, the spokesperson reiterated that religious elements cannot be "the pervasive theme" in classrooms - which means that one culture cannot trump another at a public school.  At least that's the excuse that liberal educators and policy makers want us to believe.

And by the way, the definition of "pervasive theme" may be sort of difficult to pin down. But then again, maybe not!

After all, not very long ago California had a week of "Islamic studies" where all of the students - even those of other religions - had to dress as Muslims and learn about Islam, and learn about their religious and political agenda, and even attend a Mosque.

What would have happened if a Christian student would have objected?
From what I have seen these days, he would have probably been disciplined and maybe suspended from school for not adhering to the school's "political correct" agenda.
No, this isn't about "being sensitive" to the religion of others. It's all about control and dismantling a Christian America.

It is all about a liberal atheist desire to eliminate Christmas from America.  And no, to the Liberal Left, facts don't matter!

And sorry Mr Obama, but facts are facts, and the fact is "America is a Christian Nation."
It is just that simple, and yes, it is a time of year when most all Americans celebrate the birth of Jesus Christ.
The war on Christmas seems to get worse every year.  But then again, this war is no different that any other attack on America.  It is designed to cut away at our traditions and our values.

It is designed to demoralize Americans.

It is organized by the Liberal left who hate commercialism and Capitalism.  Liberals see it as a mission, as their life's work, to end Christmas and a Christian's ability to worship.

The war is being waged to deprive our children of American traditions. And yes, attacking Christians and Christmas is all part of their agenda.

If they get their way and remove religion and traditions, remove traditional marriage, fuel hate for America, and work to make harmful drugs even more available through legislation, then they accomplish their mission of breaking down the American family unit - and subsequently blacken American society.
No Jesus, no Santa, no Christmas, no America. All goals of American Liberalism - a truly toxic ideology.