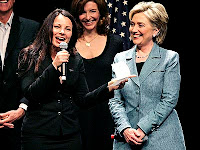 Things never stop amazing me! No really, as I get older, I would think that I've seen it all to the point that nothing would amaze me - but that's just not the case.

There are people out there who believe in all sorts of fantastic things. It seems Hollywood has its share and than some.

It's no secret that most in Hollywood are extremely liberal and more than willing to tell us how to live our lives. Just ask them, they are as opinionated as the day is long, and more then willing to tell you that they know everything about every thing.

All this, and yet most of them seem ride a razor's edge on being absolute loons. A good example of this was shown lately when the actress, who used to be "The Nanny" on television, came out of the closet and revealed that she'd been kidnapped by Aliens as a teenager.

Not Illegal Aliens, but Space Aliens. The little green men type. Maybe like the ones in that Hollywood Classic "Mars Attacks."

No kidding! Fran Drescher believes that she was abducted by Aliens.

She was serious folks, the same lady who I saw on television say that she believed Obama is the most intelligent President the United States has ever had, is now saying that she was abducted by Aliens from outer space.

In an interview with The Huffington Post, the former "The Nanny" star said that she and her ex-husband Peter Marc Jacobson both have been "visited" when they were in their teens.

Now to me that automatically means that this actress might be nuts!

"Peter and I both saw Aliens before we knew each other, doing the same thing, driving on the road with our dads," the actress Fran Drescher said. And no, she was supposedly sober when she said it.

"We were both in junior high. A few years later, we met, and we realized that we had the same experience. I think that somehow we were programmed to meet. We both have this scar. It's the exact same scar on the exact same spot," she said.

Ex-husband Marc Jacobson, who is best known as the co-creator of the popular sitcom "The Nanny" which of course he created and wrote with his then wife actress Fran Drescher, claims that Fran's scar is from a drill bit or is the result of burning herself with hot water.

But friends, that explanation is too simple to sit well with Fran Drescher. The actress argues, "That's what the Aliens programmed us to think. But really, that's where the chip is."

OK, stop laughing! She wants to be taken seriously! Just remember that she really believes this.

Besides, if you recall, in 2008, Fran Drescher said that she had been considering a run for the United States Senate to succeed Hillary Rodham Clinton. So who knows, as a strong Democrat, she might be a part of the Obama White House soon - as maybe a Czar for the White House Office of Intergalactic Relations.

And yes, just imagine that she will again be running around the country telling you to vote for Obama - because like most Hollywood types, she knows what she's talking about.

This is straight from the Associated Press. Why? Simple, no one would believe me after they read this.

Total commissary sales were up from $37.18 million in 2010, The Dayton Daily News reported.

Inmate junk food sales average around $745 per inmate per year, with candy, chips, cookies and soda among the big sellers - that's statewide.

So where is Michele Obama when we need her?! I thought she was representing the Obama Administration's efforts to regulate junk food across the nation. She should be there putting a stop to this!

Taxpayers do not pay for inmates' junk food, or even their deodorant. Inmates earn on average $18 a month working prison jobs, and family and friends can add money to their accounts for commissary items. More expensive items such as sneakers and TVs are purchased through a secure online system and shipped to inmates.

Inmates can earn money through a variety of positions at Ohio facilities, including working as janitors and in commissaries, libraries and food service.

Profits are used for shared amenities including books, televisions in prison "common areas." Those types of items keep inmates involved in "positive activities," said JoEllen Smith, a spokeswoman for the Ohio Department of Rehabilitation and Correction.

"Inmate idleness can oftentimes lead to management issues within a prison," she said.

Management issues? Is that code for unrest, rebellion, and revolt, if they don't get their sugar? Just so you know, the Prisoners, Opps ... I mean Inmates, get a pretty good deal on their junk food.

The markup on commissary items averages 25 percent, but it is limited to a maximum of 7 percent on stamps and items such as over-the-counter medications.

Imagine that. Wow, it's been a long time since I worked in Corrections in the Marine Corps. In those days, there was no such thing as prisoners getting OTC (over-the-counter) medications of any sort. And as for sodas and junk food, are you kidding?!

Back in the mid to late 70's, the last thing we wanted was our Prisoners all sugared-up and bouncing off the walls with energy. I'm thankful that the bleeding hearts that are here today weren't so many back then.

Yes, we had a few anti-victim bleeding heart liberals back then. They were usually easily recognized because they were always the College Educated Officers who demanded that we stop beating child molesters and rapists in our custody.

The commissary is one of the most important issues for inmates, next to visitation and recreation, and many "rely on it for basic essentials such as personal hygiene items and food," Saul said.

"The things that are difficult to keep in stock, depending on the season, are pop and ice cream," Dayton's commissary manager Fern Boddie said.

That commissary stocks more than 1,000 items, employs 14 inmates, and moves $59,800 in merchandise monthly. Inmates slip order forms through a window slot and the purchase price is electronically deducted from their accounts.

Prisoners owing court costs are limited to spending $15 a month, but others spend around $40 a week, said Fern Boddie.

Boddie has stocked a wider variety of personal care products since the prison switched from a male to a female population in October. "The men didn't really care about the numbers and types of shampoo," Boddie said. "The women really, really care."

But of course they do! Everyone needs to look and feel good in prison! 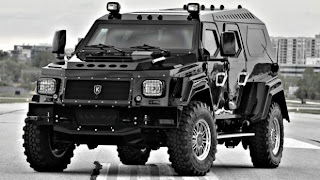 This is the ultimate all-terrain vehicle. It is called "The Conquest."
Happily, it's made in Canada. I'm just glad that China doesn't make it. I'm tired of China stealing technology to build things.

OK so that don't steal it all, some or it they buy from greedy people willing to sell their souls and their country for a dollar.

"The Conquest" is lightly armored, anti-mine, anti-riot and "almost" bombproof.

It is ready for any run against Occupy Protest Forces in any city including liberal-ville Oakland California, a skirmish against AK-47 armed gangs in East L.A., angry deer poachers in Railroad Flat, violent abortion advocates, gay San Francisco, or the last gasp of charging apocalyptic Hollywood zombies bent on bringing Communism to America.

Of course the definitive question as to its usefulness: Will it get me to Wal-Mart after the Mayan Calender runs out?

After all, since most people in this liberal nuthouse called California may throw themselves off a cliff and into the sea because they take things like a Mayan Calender way too serious, there are a whole lot of us that live in the real world and don't take that sort of nonsense serious at all.

This leads us to our last shot of the night - believe it or not, it relates to the last shot.

How? Well, Ford demanded that GM and NBC pull their Chevy Super Bowl ad during the big game.

Why? Well, in response to a Super Bowl ad for Chevy trucks, Ford sent letters to both GM and NBC asking that the $7 million ad be pulled from the air during the game.

The minute-long ad, entitled "2012," is a spoof on the Mayan Calender nonsense. It features a Silverado Chevy truck driving through what is supposedly the ruins of a city after the 2012 apocalypse - as predicted by those little Mayans folks who didn't have the smarts to save their own society - but are supposedly so smart as to have predicted the end of the world. Right!

So Ford is angered by the suggestion in the ad that a driver of a Ford truck would not be among the survivors.

So let's see if I have this correct. Ford is upset that they are not getting equal time in a spoof about a stupid calender that has no known relevance other than belonging to a people long dead.
According to Motoramic.com, Ford sent the "cease and desist" letter to Chevrolet and was pressuring NBC to pull the ad.

GM Global Chief Marketing Officer Joel Ewanick responded with a press release saying the company stands by its claim that the Silverado is "the most dependable, longest lasting full size pickup on the road."

Joel's statement went on to say, "We can wait until the world ends, and if we need to, we will apologize. In the meantime, people who are really worried about the Mayan calendar coming true should buy a Silverado right away."

I can't help but admire Joel. He sounds like a man who understands what to say when you're dealing with children.

Ford spokesman Mike Levin, who wasn't amused, told Motoramic: "Claims are made in advertising frequently by every auto manufacturer… This type of ad protest happens from time to time," adding that "we'll always defend our products."

I can't help but wonder if the Ford spokesman took a time-out after he said that!

Have a great middle of the week, and remember that the best medicine for the blues is to find things that make you laught. And yes, the news is full of it!