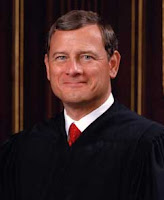 Thursday, June 28th, 2012, will go down as a day of jaw-dropping betrayal worthy of Benedict Arnold as Chief Supreme Court Justice John Roberts now becomes the Liberal who saved ObamaCare.

Yes, the man who I supported for Chief Justice, the man who was thought to be a Conservative, the man who Obama attacked during his confirmation hearing, that man became the Liberal who provided the swing liberal vote in a 5-to-4 decision that upheld the so-called Constitutionality of almost all of Obama's boldest action to further enslave Americans.

Yes, that government program called ObamaCare, which forces enrollment and will penalize Americans if they are not enrolled, has passed the so-called scrutiny of the Supreme Court. Although today, it seems less like scrutiny and more like old fashion liberal politics.

Well, just as many over the years have studied the actions, the motivations, the reasoning, behind what the traitor Benedict Arnold did back more than 200 years ago, now many will spend years speculating about Roberts’ motivations when he betrayed the American people.

And yes, why did he decide to join the Liberals on the Supreme Court Justices in what is the most important Supreme Court decision in years?

In poll after poll, an overwhelming majority of the public sees the Supreme Court and the justices there as being purely partisan. And poll after poll shows the high court as a party to the liberal agenda that is slowly dismantling the freedoms granted to Americans.

One of the most important passages in Roberts’ majority decision was the Chief Justice’s assertion that "We do not consider whether the act embodied sound policies. That judgment is entrusted to the Nation’s elected leaders. We ask only whether Congress has the power under the Constitution to enact the challenge provisions."

In short, if you want a national referendum on the health-care law, then the proper arena is the 2012 campaign—and not the inner sanctums of the Supreme Court.

I can only hope that he removes John "Benedict Arnold" Roberts from his list. After all, Roberts went in one direction and Scalia, Thomas and Alito went in the opposite on the constitutionality of ObamaCare.

And maybe now, well Obama might want to rethink his next choice for Supreme Court Justice.

In 2005, Obama, who is supposedly a former constitutional law professor, declared in a Senate address that he was opposing Roberts’ nomination to the Supreme Court because “I ultimately have to give more weight to his deeds and overarching political philosophy … than to the assuring words he provided me in our meeting.”

Maybe now, Obama feels that he misjudged the traitor who saved his legislative legacy.

With four of the current Supreme Court Justices now over the age of 70, it is very likely that whoever is elected president this November will get the opportunity to put his ideological stamp on the Supreme Court.

Robert's decision has a profound impact on curtailing the fundamental freedom of the American people. I hope he sleeps well at night, but I doubt that he will because of his actions today.

John "Benedict Arnold" Roberts has enabled our highest court to be political left of the rest of the country.

His supposed reasoning was that the government has a right to tax. His reasoning is flawed because the case before them was specifically regarding the mandate portion of ObamaCare to enroll in a government program - even if it is against the will of the people.

It has nothing to do with taxes, and has everything to do with servitude - a condition in which one lacks liberty especially to determine one's course of action or way of life.

So will Chief Justice John Roberts be remembered in history the same as Benedict Arnold? It's very possible considering the traitor, John "Benedict Arnold" Roberts, has subsequently told Americans "No Liberty For You!"