Today is the annuversery of D-Day which took place on June 6th, 1944.

I truly believe that every student in every school across our great nation should read this small part of history. It is a "prayer" given to America at the start of D-Day.

I find it a shame that this small very touching, very patriotic, very stirring "prayer" has been somehow swept under the rug because it is a "prayer" - and subsequently is not condoned in schools because of Political Correctness.

Given by one of America's most beloved Presidents, the prayer points to the heart and breath of America. It goes to who we are as a nation, as a people, and tells of our ideals and courage.

June 6th, 1944
"My fellow Americans: Last night, when I spoke with you about the fall of Rome, I knew at that moment that troops of the United States and our allies were crossing the Channel in another and greater operation. It has come to pass with success thus far.


And so, in this poignant hour, I ask you to join with me in prayer:


Almighty God: Our sons, pride of our Nation, this day have set upon a mighty endeavor, a struggle to preserve our Republic, our religion, and our civilization, and to set free a suffering humanity.


Lead them straight and true; give strength to their arms, stoutness to their hearts, steadfastness in their faith.


They will need Thy blessings. Their road will be long and hard. For the enemy is strong. He may hurl back our forces. Success may not come with rushing speed, but we shall return again and again; and we know that by Thy grace, and by the righteousness of our cause, our sons will triumph.


They will be sore tried, by night and by day, without rest-until the victory is won. The darkness will be rent by noise and flame. Men's souls will be shaken with the violences of war.


Some will never return. Embrace these, Father, and receive them, Thy heroic servants, into Thy kingdom.


And for us at home -- fathers, mothers, children, wives, sisters, and brothers of brave men overseas -- whose thoughts and prayers are ever with them--help us, Almighty God, to rededicate ourselves in renewed faith in Thee in this hour of great sacrifice.


Many people have urged that I call the Nation into a single day of special prayer. But because the road is long and the desire is great, I ask that our people devote themselves in a continuance of prayer. As we rise to each new day, and again when each day is spent, let words of prayer be on our lips, invoking Thy help to our efforts.


Give us strength, too -- strength in our daily tasks, to redouble the contributions we make in the physical and the material support of our armed forces.


And let our hearts be stout, to wait out the long travail, to bear sorrows that may come, to impart our courage unto our sons wheresoever they may be.


With Thy blessing, we shall prevail over the unholy forces of our enemy. Help us to conquer the apostles of greed and racial arrogancies. Lead us to the saving of our country, and with our sister Nations into a world unity that will spell a sure peace a peace invulnerable to the schemings of unworthy men. And a peace that will let all of men live in freedom, reaping the just rewards of their honest toil.


Thy will be done, Almighty God.

The invasion of France on June 6, 1944 was a triumph of intelligence, coordination, secrecy, and planning. The bold attack was also a tremendous risk. It ultimately succeeded because of bravery in combat. Incredible bravery, self-sacrifice, and a true desire to beat the enemy.

Learn some of the basic facts about D-Day.

The Meaning of the "D"

The day that 150,000 Allied soldiers landed on the shores of Normandy was certainly decisive. And with ships, landing craft and planes leaving port by the tens of thousands for a hostile shore, it is no wonder that some would call it "disembarkation" or "departed."

There is not much agreement on the issue.

But the most ordinary and likely of explanations is the one offered by the U.S. Army in their published manuals. The Army began using the codes "H-hour" and "D-day" during World War I to indicate the time or date of an operation's start. Military planners would write of events planned to occur on "H-hour" or "D-day" - long before the actual dates and times of the operations would be known, or in order to keep plans secret.

So the simple truth is that the "D" may simply refer to the "day" of the invasion.

Tuning in to D-Day

In the pre-television era, Americans got their breaking news from their radios.

London-based American journalist George Hicks made history with his radio broadcast from the deck of the U.S.S. Ancon at the start of the D-Day invasion. "...You see the ships lying in all directions, just like black shadows on the grey sky," he described to his listeners. "...Now planes are going overhead... Heavy fire now just behind us... bombs bursting on the shore and along in the convoys."

His report, including the sounds of heavy bombardment, sirens, low-flying planes, and shouting, brought Americans to the front line, with all its chaos, confusion, excitement, and death.

And of course, there is the American Noah

Louisiana entrepreneur Andrew Jackson Higgins first designed shallow-draft boats in the late 1920s to rescue Mississippi River flood victims. Higgins tried for years to sell his boats to the U.S. military, but he was rejected repeatedly.

At last, the United States Marine Corps selected the flat-bottomed landing craft for troop landings on Pacific beaches. Higgins, who had paid heavily out-of-pocket to promote his boats, finally landed the government contract - and his factories produced 20,000 of the versatile craft for the war effort - including D-Day. 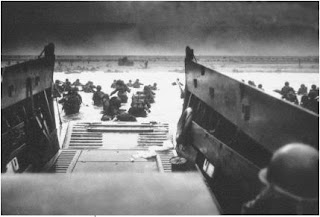 Stiff German resistance resulted in nearly 10,000 Allied casualties, but the Germans were ultimately unable to repel the Allied forces. Although German resistance continued even after all five beachheads were taken, they had too few troops in the area to be effective.

By August 1944, all of Northern France was under Allied control as Eisenhower began to prepare for the invasion of Germany.

Hitler was forced to fight a two-front war against the Russians on the East and the Allies which included Americans, British, Canadians, and French on the West.

Within a year, Adolph Hitler committed suicide and the war was over.

On This Day Each Year

We should bow our heads and give those who fought and died a moment of silence.

We should never relinquish their deeds to just sit in history books. As with all great deeds, great endeavors, great sacrifice, we should never forget.

Whether they served in uniform or worked to keep the soldier, the sailor, the airmen, the Marine, armed, supplied, safe, and mended, may God Bless all who did their duty during that war.