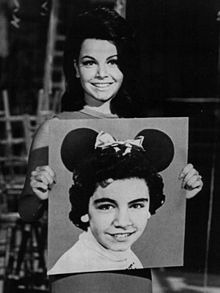 I just read that the Walt Disney Co. announced that Annette Funicello has died at age 70.

For you who never had the privilege of watching the original Mickey Mouse Club while growing up, you missed a great deal. And of the things you missed, you missed a very talented Annette Funicello.

She went from a 13 year-old Mouseketeer to a Beach Party movie icon, film star, wife and mother. Like millions of others, I grew up with Annette Funicello watching her on the original "The Mickey Mouse Club" on television, and later in the Beach Party movies.

Annette Funicello became the dark-haired darling of TV's "The Mickey Mouse Club" in the 1950s. She cemented her status as an American pop-culture icon in the 1960s by teaming up with actor/singer Frankie Avalon in the popular Beach Party movies.

Annette was diagnosed with MS, multiple sclerosis, in 1987 and became a spokeswoman for treatment of the chronic, often-debilitating disease of the central nervous system. That's what finally took her when she died at Mercy Southwest Hospital in Bakersfield, California.

Bob Iger, Disney’s chairman and chief executive, said, "Annette was and always will be a cherished member of the Disney family, synonymous with the word 'Mousketeer,' and a true Disney legend. She will forever hold a place in our hearts as one of Walt Disney’s brightest stars, delighting an entire generation of baby boomers with her jubilant personality and endless talent. Annette was well known for being as beautiful inside as she was on the outside, and she faced her physical challenges with dignity, bravery and grace. All of us at Disney join with family, friends, and fans around the world in celebrating her extraordinary life."

Annette Joanne Funicello was born on October 22nd, 1942, and was only 12 years old, a dance-school student performing the lead role in “Swan Lake” at her dance-school's year-end recital at the Starlight Bowl in Burbank in the spring of 1955, when Walt Disney saw her.

She joined a group of other talented young performers hired to become Mouseketeers on “The Mickey Mouse Club."

It was a children's variety show that debuted on ABC in October 1955 and quickly became a daily late-afternoon ritual for millions of young Americans. My brothers and I were part of those millions of kids who wouldn't miss a single show.

Like her fellow female Mouseketeers, Annette Funicello wore a mouse-eared beanie, a blue pleated skirt, and a white, short-sleeved turtleneck sweater with her name emblazoned in block letters across her chest.

There was something special about the Mouseketeer with the curly black hair that unexpectedly turned her into the Mouse Club's biggest star.

Annette made her acting debut on "The Mickey Mouse Club" serial "Adventure in Dairyland." She also appeared in two of the popular "Spin and Marty" serials about a Western dude ranch for boys, with Tim Considine and David Stollery in the title roles.

She gained fame on Walt Disney's "Mickey Mouse Club," which for you who are too young to have enjoyed such innocents was an amalgamation of stories, songs, and dance routines that ran from 1955 to 1959.

There were no pyrotechnics, no loud music blaring to disguise the voices of the singers. The voices were great, the skids were outstanding, and nothing was violent. It was just a lot of fun.

Annette soon began receiving 8,000 fan letters a month, 10 times more than any of the 23 other young performers.

And yes, in 1958, Walt Disney showcased his prized Mouseketeer in her own show called "Annette" which was a serial withing the show.

"The Mickey Mouse Club" ended production in 1959 and went into reruns, that's how most of us still watched it for years. 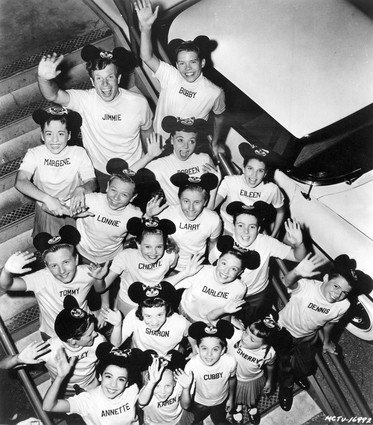 By then, 15-year-old Annette was the only Mouseketeer to remain under exclusive contract to the Disney studio.

She made her feature-film debut in "The Shaggy Dog," a 1959 comedy starring Fred MacMurray. It was the first of four Disney feature films she appeared in over the next six years, including "Babes in Toyland," "The Misadventures of Merlin Jones" and "The Monkey's Uncle."

Also, since she remained under contract with Disney, she did television roles in Zorro, Elfego Baca, and The Horsemasters.

For Zorro, she played Anita Campillo in a three-episode storyline about a teen-aged girl who arrives in Los Angeles to visit a father who does not seem to exist. This role was reportedly a birthday present from Walt Disney, and the first of two different characters played opposite Guy Williams as Zorro.

Although uncomfortable being thought of as a singer, Annette had a number of pop record hits in the late 1950s and early 1960s, including: "Tall Paul," "First Name Initial," "O Dio Mio," "Train of Love" (written by Paul Anka) and "Pineapple Princess."

They were released by Disney's Buena Vista label. Annette also recorded "It's Really Love" in 1959, a reworking of an earlier Paul Anka song called "Toot Sweet"; Anka reworked the song for a third time in 1962 as "Johnny's Theme" and it opened The Tonight Show Starring Johnny Carson on television for the next three decades.

Paul Anka was noted to have a crush on her, however, Walt Disney overprotected Annette, which broke Paul's heart. This resulted in his song "Puppy Love", which was inspired by his hopeless romantic crush on Annette.

Walt Disney was reportedly a fan of 1950s pop star Teresa Brewer and tried to pattern Annette's singing in the same style.

Annette credits "the Annette sound" to her record producer, Tutti Camarata, who worked for Disney in that era. Camarata had her double-track her vocals, matching her first track as closely as possible on the second recording to achieve a fuller sound.

Annette became a teen idol after she receiving a big career boost from Walt Disney who agreed to loan her out to American International Pictures to make "Beach Party" movies with actor/singer Frankie Avalon.

In 1979 Funicello began starring in a series of television commercials for Skippy peanut butter.

She and Frankie became iconic as "beach picture" stars and were re-united in 1987 for the Paramount film "Back to the Beach," parodying their own surf-and-sand films two decades earlier. They toured the country as a singing act. It was then that she began to suffer from dizzy spells, but she kept her failing health from her friends and family.

Then, in 1992, Annette absolutely stunned fans and friends around the world when she announced that she was suffering from multiple sclerosis.

She had kept her condition a secret for many years, but felt it necessary to go public to combat the nasty and hateful rumors being spread that her impaired ability to walk was the result of "alcoholism."

Yes, even a person as sweet and giving as Annette Funicello are attacked without reason. For me, I can only hope those spreading such nasty rumors enjoy their horrible lives.

In 1993, she opened the Annette Funicello Fund for Neurological Disorders at the California Community Foundation.

Her autobiography, dictated to Patricia Romanowski and published in 1994, was "A Dream Is a Wish Your Heart Makes: My Story."

The title was taken from a song from the Disney movie Cinderella. A made-for-TV movie based on the book, A Dream Is a Wish Your Heart Makes: The Annette Funicello Story, was made in 1995.

In the final scene, the actress Eva LaRue portraying Annette riding in a wheelchair, turns away from the camera — turning back, it is Annette Funicello herself who delivered a message to a group of children.

During this period, she produced a line of teddy bears for the Annette Funicello Collectible Bear Company. The last collection in the series was made in 2004. She also had her own fragrance called "Cello, by Annette".

In 1986, she married California harness racing horse breeder/trainer Glen Holt. The couple were frequently seen at Los Alamitos Race Course and at Fairplex in Pomona in the 1980s and 1990s attending harness horse races.

In March 2011, her Encino, California home caught fire. She suffered smoke inhalation, but was otherwise unharmed. After the fire, Annette and her husband Glen began living full time at the modest ranch that they purchased decades earlier, located just south of Shafter, California, which is just north of Bakersfield.

That remained her primary residence until she passed away today at Mercy Southwest Hospital in Bakersfield, California..

I've read where she was a wonderful person, a great mom and wife, and a tireless spokeswoman for MS. It is said that she remained cheerful and upbeat, even while fighting her illness. She is said to have had a courage that inspired many around her.

I pray that God has a special place for one who gave so much to others.

For us who grew up watching "The Mickey Mouse Club," Annette was the pretty dark-haired "older" Mouseketeer. At 13 years old, she was America's Sweetheart. We all loved her.

I've said a small prayer for her today. May God bless her and her family at this time.