What has America become?

Every once in a while I get something sent to me that is really well done. The "letter to the editor" below sums up things really well.

The author, a man by the name of Ken Huber spells out the problems we face while not pulling his punches.

"What has America become?" was written by Ken Huber of Tawas City, Michigan. It was originally printed in the Iosco County News Herald on June 9, 2010, published in the Opinion column.

It contains a series of comparisons and contrasts which causes one to think about the double-standards and conditions under which we now live here in America. It is short and worth the read. 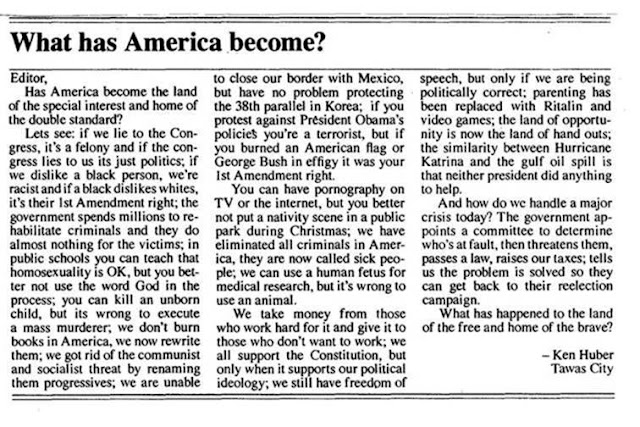 Reprinted (for folks like me who need bigger print):

Has America become the land of special interest and home of the double standard?

Lets see: if we lie to the Congress, it's a felony and if the Congress lies to us its just politics; if we dislike a black person, we're racist and if a black person dislikes whites, its their 1st Amendment right; the government spends millions to rehabilitate criminals and they do almost nothing for the victims; in public schools you can teach that homosexuality is OK, but you better not use the word God in the process; you can kill an unborn child, but it is wrong to execute a mass murderer; we don't burn books in America, we now rewrite them; we got rid of communist and socialist threats by renaming them progressive; we are unable to close our border with Mexico, but have no problem protecting the 38th parallel in Korea; if you protest against President Obama's policies you're a terrorist, but if you burned an American flag or George Bush in effigy it was your 1st Amendment right.

You can have pornography on TV or the Internet, but you better not put a nativity scene in a public park during Christmas; we have eliminated all criminals in America, they are now called sick people; we can use a human fetus for medical research, but it is wrong to use an animal.

We take money from those who work hard for it and give it to those who don't want to work; we all support the Constitution, but only when it supports our political ideology; we still have freedom of speech, but only if we are being politically correct; parenting has been replaced with Ritalin and video games; the land of opportunity is now the land of hand outs; the similarity between Hurricane Katrina and the gulf oil spill is that neither president did anything to help.

And how do we handle a major crisis today? The government appoints a committee to determine who's at fault, then threatens them, passes a law, raises our taxes; tells us the problem is solved so they can get back to their reelection campaign.

What has happened to the land of the free and home of the brave?

If we were writing this today, just a few years later, we can add:

Today it is just fine for the Federal Government to give billions of dollars to Foreign Countries not friendly to the United States, and have Homeland Security purchase 7,000 M-16 rifles for "personal use," buy 1.6 billion rounds of ammunition enough rounds to fight a war for 20 years, and buy 2,717 MRAP tanks for no reason nor justification, yet at the very same time say the government does not have enough money for FDA Meat Inspectors, FAA Air Traffic Control towers, or to open the White House to tours by taxpayers.

Today it is OK to suspend a child for making a "pop-tart" into what only a the child would consider a gun, or for wearing a patriotic t-shirt to school, yet it is OK for the Democrat Party's top donors in Hollywood to come out with more and more of the most ultra-violent movies ever made, and unrealistically graphic video games, without any consequences for their actions.

Today it is OK for the Federal Government to give a billion-dollar corporation Planned Parenthood millions of dollars in taxpayer funds, yet no one in government seems concerned that Abortion in America has turned into a billion-dollar Industry onto itself. An industry that is taxpayer funded and is responsible for killing millions of babies, not for reasons such as rape or incest or because the patient is at some sort of life-threatening medical condition, but instead as merely a birth-control method.

Today a student who spends $3000.00 for birth control over a 3 year period can go before a Senate committee to ask for more money, and then become a speaker at the Democrat National Convention, instead of being seen as a person with a psychological problem and referred to counseling for sex addiction.

Today Liberal politicians take offense and call her detractors "sexists" when that same woman from Georgetown University is called a "whore," all while at the same time they practice discrimination when they attempt to disarm women who have been rape victims and use guns for self-defense.

Today the government wants legal gun owners to register all of their guns with the government, yet child rapists, murderers, arsonist, and Muslim terrorists don't have to be registered.

Today we have teachers who demand that Christian students write the word "Jesus" on a piece of paper, place it on the floor and stomp on it, yet Muslims are protected from any sort of discrimination.

Today it is OK for white Liberals and Democrats to attack African-American Conservatives with impunity, yet anyone or group such as the Tea Party who disagrees with President Obama's policies are automatically called "Racists" and "Bigots."

Today, unlike years ago when Television News broadcasts were basically politically neutral, the major mainstream News outlets ABC, NBC, CBS, and CNN and the Associated Press are unabashedly biased and make no effort to hide their Liberal beliefs or ties to the Democrat Party, all at the same time calling Fox News biased because Fox doesn't go along with their ideology or their political ties.

Today the EPA and USDA over regulates farmers and ranchers to the point of putting them out of business, yet nothing is said about the huge amounts of food that are now being brought into the United States from countries that have little to no environmental regulations on how their crops are grown - thus bringing harmful vegetables and meats into the United States for American consumers to eat. And yes, with no warnings attached to those foods.

Today it is OK for homosexual terrorist groups throw blood on Catholic practitioners coming out of church, yet those church goers are the ones called names like "homophobes" for not accepting their strange lifestyle.

Today it is OK for liberal groups to take out ads calling for the government to take control of your children, saying that you parents should have no say over what is good for your children, that the government knows what is best, that parents should hand over their children to the "collective" so that the child can be indoctrinated their way of thinking, all while at the same time the mainstream media denounces the teaching of children Christian beliefs and American patriotism - calling it conservative brainwashing.

There are more examples of double-standards and queer conditions under which we now live by here in America. The problem is that there are way too many to list here.