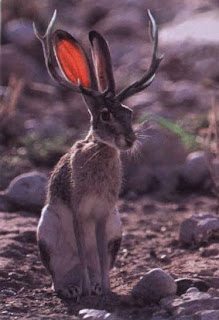 The Jackalope is an antlered species of rabbit, unfortunately rumored to be extinct, though occasional sightings of this rare creature continue to occur, suggesting that pockets of jackalope populations continue to persist in its native home, the American West. The lack of sightings these days make the Jackalope one of the rarest animals in the world.

Scientists believe Global Cooling, and the coming Ice Age as noted in the 1970s by prominent Ecologist worldwide, has further endangered these animals which some speculate are a cross between an extinct pygmy-deer and a species of killer-rabbit.

Some say the first sightings was in Douglas, Wyoming, while others say it was by Lewis and Clark in their travels just outside of Twin Falls, Idaho. Of course there are those who say it was the cowboys on the open range moving cattle north along the Chisholm Trail up from Texas who first took note of Jackalopes in the Old West. That cattle trails lead north from Texas, across Oklahoma, to Abilene, Kansas, and records show that Jackalopes were indeed sighted.


The writer Mark Twain brought this name to fame by using it in his book of western adventure, Roughing It. He noted that Jackalopes are excessive drinks of whiskey and other spirits.
Jackrabbits were named for their ears, which initially caused some people to refer to them as "jackass rabbits." The name was later shortened to jackrabbit. There are five species of jackrabbits, all found in central and western North America.

They are speedy animals capable of reaching 40 miles an hour, and their powerful hind legs can propel them on leaps of more than ten feet. They use these leaps and a zigzag running style to evade their many predators.

Black-tailed jackrabbits are common in American deserts, scrub lands, and other open spaces, including farms. They can consume very large quantities of grasses and plants—including desert species such as sagebrush and cacti.

White-tailed jackrabbits are another common species. They frequent North America's plains and farmlands, though they also inhabit wooded areas. They are prolific eaters and can consume over a pound (0.5 kilograms) of grasses, shrubs, or bark each day. The jackrabbit's breeding prowess is well known. Females can give birth to several litters a year, each with one to six young. The young mature quickly and require little maternal care.

Booming jackrabbit populations can cause problems for farmers, especially in light of the animals' healthy appetite. Jackrabbits are often killed for crop protection, but in general their populations are stable and not in need of protection.

Jackalope researchers say that they are a hybrid of both rabbit and hare and deer, as they live in the open and bear young that are naked at birth. Their antlers appearing just after being weaned. And yes, believe it or not, there are Jackalope researchers who believe that Jackalopes possess an uncanny ability to mimic human sounds.

In fact, it is said that in the Old West when cowboys would gather around their campfires to sing at night, which never happened, it is said that Jackalopes would frequently be heard singing back mimicking the voices of the cowboys. It is believed that when chased, a Jackalope will use its vocal abilities to elude capture. For instance, when chased, it will call out phrases such as, "There he goes, over there," in order to throw its pursuers off its track.

Jackalopes become especially vocal before thunderstorms, perhaps because they mate only when lightning flashes -- or so it it is theorized. And yes, that may be a reason they are so rare.

The best way to catch a Jackalope is to lure it with a flask, jigger, or bottle of whiskey, as they have a particular fondness for this drink. Once intoxicated, the animal becomes slower and easier to hunt -  although they are known to laugh a great deal and tell the same story about the sheep-herder and his flock over and over again until they're released.

Because of their drinking habits, Jackalope milk is particularly sought after. It is believed to be a powerful aphrodisiac for which reason Jackalopes are referred to as "rabbits". However, it can be incredibly dangerous to milk a Jackalope, and any attempt to do so is not advised. A peculiar feature of the milk is that it comes from the animal already homogenized on account of the creature's powerful leaps.

While Jackalope are commonly sighted in the Sierra Nevada Mountains of California, the Cascades of Oregon and Washington, and the Rocky Mountains of Colorado and Wyoming, they once roamed freely all over the American West. And yes, they have beed sighted in Widow's Creek, Alabama, and well as in Houston, Texas.

The jackalope does appear to have a European cousin known as the Wolpertinger which is said to inhabit the alpine forests of Bavaria in Germany, and in Sweden there is a related species called the Skvader.

Known by the Vikings as "Deer-bunnies", it is written that Vikings arriving in the New World would extract a Jackalope's milk as it slept belly up at night. The milk is believed to be medicinal and can be used for a variety of afflictions.

Although sly and crafty, the truth is these creatures are aggressive and unpredictable. They should not be provoked for any reason. The Vikings were thought to have gotten their violent streak from drinking Jackalope milk. Wyatt Earp was known to drink Jackalope milk instead of whiskey. And yes, we all know what that did to him.

The Federal Government wants us to believe they aren't real, but that hasn't stopped the truth from coming forward. While it is known that Jackalopes visit Ghost Town all though the West just for stroll down memory lane, the town of Douglas, Wyoming has declared itself to be the "Jackalope Capital of America." Their reason that according to legend the first Jackalope was spotted there around 1829. A large statue of a Jackalope stands in the town center, and every year the town plays host to Jackalope Day, usually held in June.

Jackalopes in Douglas, Wyoming, became so popular that by the late 1940’s the city had proclaimed itself as the "Jackalope Capital of the World,” promoting the self-proclaimed title in brochures and other tourism advertising.

In 1965, an eight foot concrete statue was erected in downtown Douglas and today billboards, and Jackalope images can be seen all over Douglas -- on park benches, fire trucks, motel signs, and a 13-foot-tall Jackalope cutout on a hillside. Yes, the state of Wyoming trademarked the name in 1965. Imagine that!

The city is also very good about warning visitors of the "vicious” animal’s propensity to attack, so tourists will see a number of posted warning signs throughout the town: "Watch out for the Jackalope."

Every year, Douglas hosts and annual Jackalope Day in June that hosts a Mini-Monster Truck Obstacle Course, Mud Volleyball tournaments, a Motorcycle Show and Rally, the Greased Pig Run, and numerous other events for those hoping for a peek at a "real Jackalope” - as if they're hard to find.

But, this is still not enough for the "Queen City” of Jackalope Country, which now plans to build yet another giant Jackalope. Towering over I-25, the giant fiberglass Jackalope will stand 80 feet above the plains. And yes, in 2005, Wyoming legislators declared the Jackalope as the state's "Official Mythical Creature."

The Jackalope is a North American folklore, a so-called "fearsome critter" described as a jackrabbit with antelope horns or deer antlers and sometimes a pheasant's tail and often hind legs. It is also known as "Lepus temperamentalus."

Are there horned rabbits in America? The experts say yes. But as usual, though there are scientific reasons why Jackalopes exist, there are those who claim Jackalopes do not exist -- instead saying that since they have never seen one how can they exist. That seems to be rather silly, I for one have never seen a million dollars but I know it exist because the government has a million dollars for this and that all the time. Just ask them.﻿

I believe they're around since I came across a Jackalope sitting at a bar in Virginia City, Nevada, back in the early 1980s during a hot summer when the poor fellow wanted a cold beer. Even drunk, he, or she, was a quiet sort. Lousy story teller though!


It is possible that the tales of Jackalopes were inspired by sightings of an animal hybrid which occurs in many cultures, for example as the griffin and the chimera. Indeed, the term chimera has become the categorical term for such composites within the English language.

More mythological references can be found in ancient Huichol legends of the deer and the horned rabbit. As with other ancient cultures, the Huichol oral tradition has passed down tales of the sharing of horns between the two animals.

This folklore may be due to the rabbit and deer being paired up as far back as the Mesoamerican period of the Aztecs as twins, brothers, even the sun and moon. Aztec lore also refers to Jackalopes as warrior hare that never fought a battle but sat around Aztec saloons 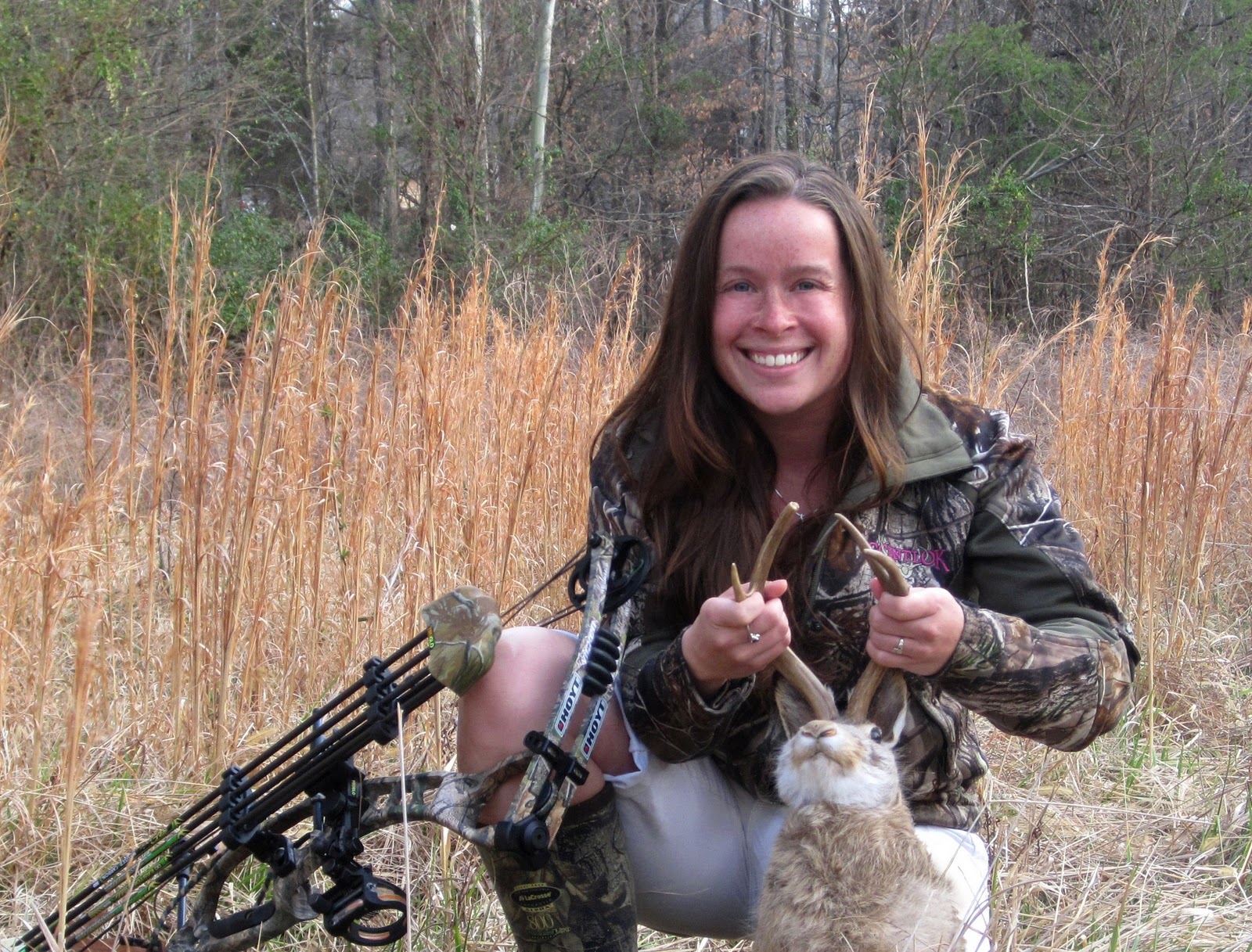 Knowing the correct method of capture, this woman is seen here holding an intoxicated male Jackalope! 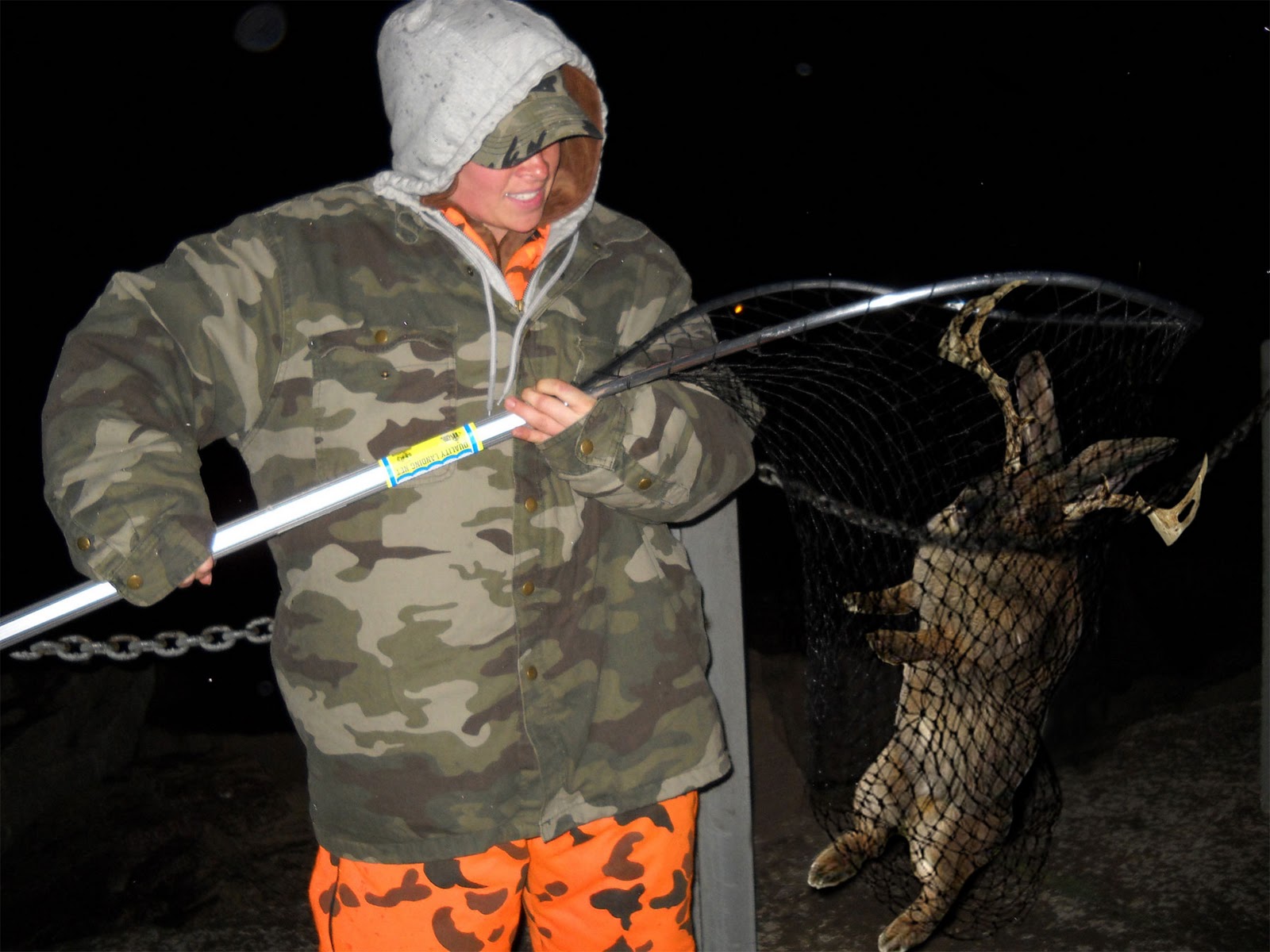 This picture proves booze is their undoing as this hunter netted this drunk Jackalope as it was telling her a story about seeing Big Foot!

In some parts of the Western United States, that is West of the Mississippi, it is said that Jackalope meat does not taste like chicken -- but instead has a taste similar to lobster! For that reason, there are those who use every trick there is to hunt the ever wily Jackalope!

In Texas, August 15th is the first day of Jackalope Season. Jackalope there are said to have a Chili flavor. In the town of Ozark, which is in Franklin County, Arkansas, Jackalope drink a lot of moonshine for some odd reason. In the Snake Pit in Enaville, Idaho, Jackalope are known to stop in for a shot of bourbon whiskey which is kept on the floor at the end of the bar. If you stop in and the shot glass on the floor is empty, then you may have just missed one.

The historic H-B Saloon in Oakdale, California, is well known for its cowboys and rowdy Jackalope that come in after the rodeo there. While a few have been caught staggering out the door on dark nights when there's no moon in the sky, most simply move on after telling tall tales about meeting Big Foot and having drank with the Loch Ness Monster.

Recently, while in Genoa, Nevada, I found out that the Genoa Bar and Saloon which is reported to have opened its doors 1853, and is supposedly the oldest bar in Nevada, was visited by a Jackalope that stopped in for a beer. Supposedly it told this insane story and bragged about kicking the butt of some Chupacabra in San Antonio, Texas. While the place doesn't allow horses in the saloon, a yarn from a Jackalope is said to be always welcome.

Jackalope have been seen sneaking into the Big Horn Saloon in Pioneer, California, the Red Dog Saloon in Virginia City, Nevada, and other places including the Miner’s and Stockmen’s Steakhouse in Hartville, Wyoming. While these places all enjoy fun and laughter, and booze, and have for more years than others, Jackalope seem to fit right in while trying to avoid capture. Some folks who have listened to the fuzzy tailed horned critters know they enjoy telling the tallest of tales.