What Is Flag and National Anthem Etiquette? 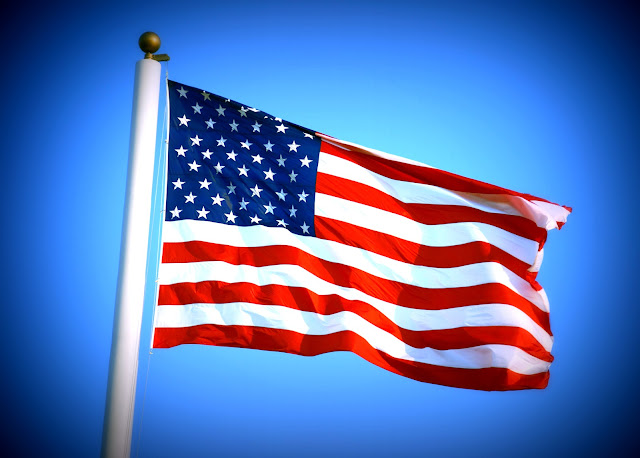 With Memorial Day coming up here in a few days, I figure it might be time to talk about what is proper Flag and National Anthem etiquette?

The information below describes the proper way for US citizens within U.S. jurisdictions to show the due respect for these symbols of our country, as defined by the Code of Laws of the United States of America - also known as the United States Code.

It is all about standards of respect.


When the flag of the United States of America is formally presented or paraded, the proper etiquette or respect is described below:

The Flag Code, which formalizes and unifies the traditional ways in which we give respect to the flag, also contains specific instructions on how the flag is not to be used. They are:
Note: Most American Legion Posts regularly conduct a dignified flag burning ceremony. Many Cub Scout Packs, Boy Scout Troops, and Girl Scout Troops retire flags regularly as well. Contact your local American Legion Hall or Scout Troop to inquire about the availability of this service.

When the flag is displayed from a staff projecting from a window, balcony, or building, the union should be at the peak of the staff unless the flag is at half staff.

When it is displayed from the same flagpole with another flag - of a state, community, society, or Scout unit - the flag of the United States must always be at the top except that the church pennant may be flown above the flag during church services for Navy personnel when conducted by a Naval chaplain on a ship at sea.

When the flag is displayed over a street, it should be hung vertically, with the union to the north or east. If the flag is suspended over a sidewalk, the flag's union should be farthest from the building.

When flown with flags of states, communities, or societies on separate flag poles which are of the same height and in a straight line, the flag of the United States is always placed in the position of honor - to its own right:
When flown with the national banner of other countries, each flag must be displayed from a separate pole of the same height. Each flag should be the same size. They should be raised and lowered simultaneously. The flag of one nation may not be displayed above that of another nation.


Raising and Lowering the Flag

Parading and Saluting the Flag

When carried in a procession, the flag should be to the right of the marchers. When other flags are carried, the flag of the United States may be centered in front of the others or carried to their right. When the flag passes in a procession, or when it is hoisted or lowered, all should face the flag and salute.

The Flag in Mourning

To place the flag at half staff, hoist it to the peak for an instant and lower it to a position halfway between the top and bottom of the staff. The flag is to be raised again to the peak for a moment before it is lowered.

On Memorial Day the flag is displayed at half staff until noon and at full staff from noon to sunset. The flag is to be flown at half-staff in mourning for designated, principal government leaders and upon presidential or gubernatorial order.

When used to cover a casket, the flag should be placed with the union at the head and over the left shoulder. It should not be lowered into the grave.

National Anthem Etiquette
During the Pledge of Allegiance and National Anthem
During the playing of the national anthem of the United States of America, the proper etiquette or respect is described below:

1. Designation. — The composition consisting of the words and music known as the Star-Spangled Banner is the national anthem.

2. Conduct During Playing — During rendition of the national anthem:

When the flag is displayed individuals in uniform should give the military salute at the first note of the anthem and maintain that position until the last note; members of the Armed Forces and veterans who are present but not in uniform may render the military salute in the manner provided for individuals in uniform, and all other persons present should face the flag and stand at attention with their right hand over the heart, and men not in uniform, if applicable, should remove their headdress with their right hand and hold it at the left shoulder, the hand being over the heart; and when the flag is not displayed, all present should face toward the music and act in the same manner they would if the flag were displayed.

Keep in mind that there is no need to observe the above etiquette if you merely see the flag.

For example, at a rodeo, the flag is often carried by a mounted rider. If the rider should carry the flag into the arena during a warm-up period prior to the rodeo there is no need to stand at attention and/or salute. However, when the flag is formally introduced and passed by, rules of proper etiquette and respect apply.

Now as for Women and Hats

At a rodeo, it is not uncommon to find women wearing cowboy hats or some other type of hat. While the United States Code does describe the removal of "headdress," or hats, as proper etiquette for the formal presentation of the flag and the playing of the national anthem, this stipulation has not traditionally been applied to women.

Today, though, with the popularity of unisex hats among women such as cowboy hats or ball caps, some women voluntarily remove their hats. To the best of my knowledge though, it is nonetheless not considered disrespectful if she chooses to leave it on. But as for the guys, they should take off their hats and place them over their hearts and give due respect to the symbol of our freedom and liberty.

It is worth mentioning that during the formal presentation of the flag and the national anthem, not all "headdress" needs to be removed. For example, religious headdress such as a Jewish yamaka has always been considered an exception and may be left on.

Though most believe that there is or at least "should be" enforcement, it should be noted that while our flag and national anthem etiquette is Federal Law as defined by the United States Code - there are no provisions for enforcement.

Then There Are The Ignorant And The Ingrate!

It's true that every now and again you find someone so self-absorbed that they are either ignorant or just plain stupid. The fact is that there are people, who in most cases were probably brought up without any guidance at all when it comes to love of our country. These people have no idea what these symbols mean, how precious they are, or that it is right to give respect to them. And yes, in most of their cases, it's a matter of us simply not being able to fix stupid!

Sadly, America has people in our country who purposely disrespect the flag in many ways.
Some say they purposely spit in the face of those who have died defending our nation, those who have become disabled serving our great country, and of course those of us who serve our nation today in some way, shape, or form. But frankly, most who knowingly disrespect our flag understand very well how their act is no different than spitting in the face of all of their fellow Americans.

As for those ingrates, they have no class and aren't worth a tinker's dam. They are completely worthless.