Last To Be Buried In Tombstone's Boot Hill 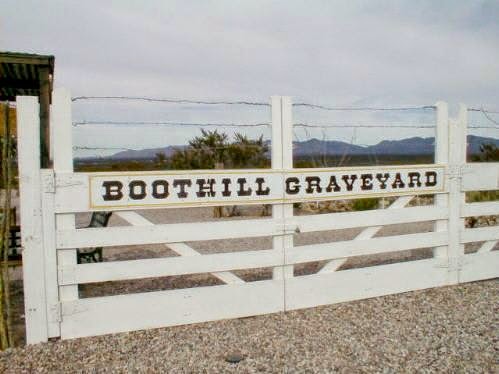 Boot Hill, or Boothill as some spell it, is the name of a number of cemeteries in the Old West. The first graveyard believed to be named "Boot Hill" is in Dodge City, Kansas.

The term came from the fact that many buried there were gunmen and cowboys who "died with their boots on" -- meaning that they died violently in gunfights or by hanging, and not in their sleep by natural causes. The term "Boot Hill" became commonplace throughout the Old West, with some Boot Hills becoming more famous than others, such as Dodge City, Kansas, Deadwood, South Dakota, and of course Tombstone, Arizona.

Because Wyatt Earp's autobiography made the unknown gunfight near the OK Corral famous since the 1930s, today the most famous "Boot Hill" is Tombstone's Boothill Graveyard. Formerly called the "Tombstone Cemetery", the rather small plot of ground features the graves of Ah Lum who was known as "China Mary," and others such as John Heath who was lynched.

Of course there are the graves of Billy Clanton, Frank McLaury and Tom McLaury who were the three men killed at the now famous O.K. Corral. Boot Hill in Tombstone is believed to hold over 300 people, 205 of which are recorded. The reason for the discrepancy is that Chinese and Jewish immigrants were actually buried there without record.

There is a separate Jewish cemetery nearby with some markers restored, and there are also marked graves of Chinese. However, most of the loss was due to neglect of grave markers and theft of these wooden relics as souvenirs. For example, when former Tombstone Mayor John Clum visited Tombstone for the first Helldorado celebration in 1929, he was unable to locate the grave of his wife Mary, who had been buried in Boot Hill.

Tombstone's Boothill was actually closed in late 1886, because the new "City Cemetery" on Allen Street had opened.

While one can the graves of others buried there, one can also visit the grave of a man by the name of Emmett Crook Nunnelley (1884 -1946). And contrary to those who say it was the Halderman brothers who have the distinction of being the last to be buried there, fact is that Emmett Nunnelley is officially the last man buried in Tombstone's Boothill.

Not much is known about Mr. Nunnelley other than he was born in 1884. And of course, that he volunteered many hours to helping restore the cemetery.

After the new cemetery was opened, the city made an exception and buried the Halderman brothers buried in Boothill. As for Boothill, no one had any use for the graveyard so it was neglected for years and sort of went to ruin. A citizen's group came together later to clean it up and restore it. Along with the rest of the group, Nunnelley spent his last years volunteering to help restore the cemetery for visitors.

Close to death, his last request was to be laid to rest there. So when he passed away in 1946, the City of Tombstone made an exception and allowed him to be buried there. Because of that, that made him the last person to be buried in Tombstone's Boothill which is a registered National Monument today.