Since folks have written wanting me to repost the article about my losing my dog Jake so suddenly for apparent no reason, here it is:

Local News - About my dog Jake


Yesterday was the 25th of May, 2012. It's the day that I realized that I really don't know why God created dogs?

Most are great, but then there are those that go far beyond great. They go far beyond the expected. They simply have that "way" about them. Those are the ones to watch out for.

One such dog was my boy Jake.

Almost two and a half years ago, my wife and I said that we should get a dog to replace Baby, who we lost a few months before in 2009. We agreed to go down to the Animal Shelter, Animal Control, and see about adopting one from there since they're always looking for good homes for strays.

I went down and found Jake sitting in a cage. He was what I was looking for, just a big brown dog like the one that my grandfather had when I was a kid.

Jake, part lab and your guess is as good as mine, turned out to be exactly what we needed. All personality, he fit in perfect around here. He came to a place where he could run - where the house is two football fields away from the front gate - where the nearest home is not near at all.

When I came home today, my father-in-law said that Jake was playing with his dog Oliver and then just laid on the floor in a spot where he usually lays - and he died. I ran in to see, and yes, in fact my Jake had died. 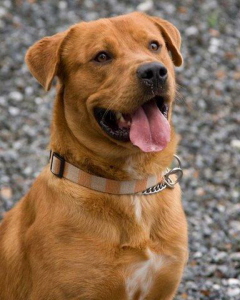 I went outside and dug a grave and buried him near my horse Murphy who died last year.

No, I don't know why God crates dogs - especially dogs like Jake.

He would jump and whirl around 360 degrees if he thought I had a treat for him. He would lay his head on my lap and look at me - into my soul - and feel at ease when I'd stroke his forehead.

He was a big dog and would wait out side atop our long driveway, and there he'd sit and wait for me to come home after volunteering at the Legion up the road.

And when I did, he would act as thought he hadn't seen me in weeks. He loved me like no other dog that I've ever had in my life.

I can't help but believe that God has a sick sort of twisted sense of humor at times. It's a belief that I've had since my days in the Marine Corps when I saw things that made me ask why would God allow certain things to happen?

It was only later that I found myself believing that some of us are tested more than others.

Why would God allow a dog a great home and family, allow for us to love one another, then watch as I openly cried as I dug his grave? And if I'm wrong, than it must purely be fate. And yes, fate can be a cruel master.

I'm sorry, but I just don't get it. Jake never hurt a soul. He only protected and loved us as he did - fully.

This morning was the first day that didn't have him nudging the bathroom door to check on me. Today, there were no more early morning belly rubs, no more greeting me at the door or in the driveway, no more running ahead of me at the house and waiting for me atop the steps, no more reaching down to take my hand as if helping me up the steps.

Today, there was no more waiting for me beside my chair, or as I'm sitting here writing.

Today, I didn't need to close my eyes to remember how he would act. I felt as though I saw him all day today. I saw him clown around with his favorite chew toy. I saw his brown eyes look at me and wag his tail knowing my thoughts. I saw him sit at the top of the driveway when I came home from the range today.

From yesterday afternoon, I knew that I would have no more of his unconditional love in just a look. No more would I feel his warmth and love. No more would I have his understanding of my sadnesses, my depression, anxiety, and joys of life.

If my wife wants another dog, then she can go find a small dog for her.

Poor Jake, he was only four years old. He was too young, too athletic, and way too lovable to just suddenly die for no apparent reason. It doesn't seem fair. This is not right. 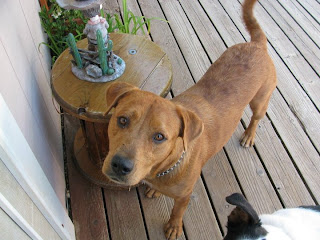