A Dozen Horses Left To Rot To Death In Colorado 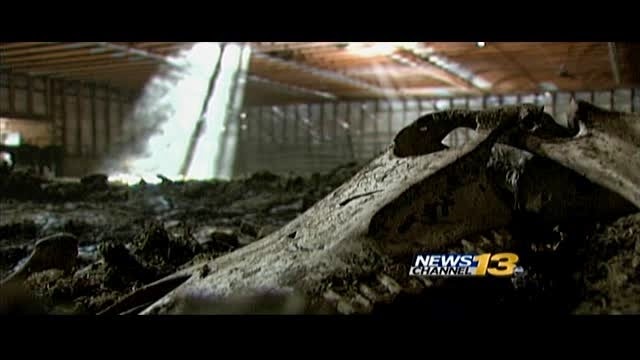 Many of you have written to ask why I don't reference NBC, CBS, and ABC News as sources of information very often?

Well, here is a perfect example why I don't use them as sources very often. This is a great example of lazy journalism versus quality reporting pertaining to a horrific event where an owner is believed to have willfully starved a dozen horses to death.

On September 21, 2014, ABC News ran the article below on their website
:
More Than a Dozen Dead Horses Found in Barn


Authorities say a special unit that responds to animal abuse will handle a case involving more than a dozen dead and malnourished horses found in a Colorado barn.

KRDO-TV ( http://bit.ly/1rcOmz5 ) reports Sunday that the El Paso County Sheriff's Office mounted unit is investigating the Friday discovery of the horses in Black Forest, near Colorado Springs. A woman who lives near the barn says she found dead horses under tarps, some no more than skeletons.

At least eight horses were alive.

Sgt. Gregory White says investigators could not legally seize the living horses because they were not in immediate danger. Authorities gave them water and food.

White says the horses' owner has been cooperative in making a plan to improve their health and conditions and has agreed to clean the property.

Friends, my first reaction was, "Is that it? So why isn't the owner of the dead horses arrested and in jail right now?"

Then I read the story from KRDO-TV and was surprised at the difference in tone and the available information of their report.

Below is the KRDO News report from their website. Please take note of how much more information is available, and the quality of the reporting, versus that of the ABC News/ Associated Press poor type.

Over a Dozen Horses Left To Rot in Barn

It was inside a barn a few dozen yards from her house.

Ragula lifted up the tarp and found it was an entire skeleton of a horse left to rot.

She called KRDO after she called the sheriff's office.  Before deputies arrived, Ragula showed KRDO her gruesome discovery…and more.

She removed tarp, after tarp.  Sometimes there was more than one body of horses underneath.

“There’s way more than I thought,” Ragula said after uncovering more than a dozen bodies.
Most of the horses seemingly left to rot in the same spot where they laid down to die.

There are eight horses still alive.  Some appeared to be malnourished with their ribs showing.  Many suffering from foundering of their hooves; four of the horses were inside the barn, walking around the bodies of the dead horses, living in feet of manure that looks to have been collecting without cleaning for years.

About two hours after they were called, El Paso County deputies arrived.  Soon after, KRDO and Ragula were forced to move back from the barn as a deputy taped it off as a crime scene.

The Sheriff’s office hasn’t responded to requests for information about the investigation.
As for Ragula, she says she just regrets that she hadn’t seen something sooner.

“They’re silent dying.  Nobody hears anything.  If I’d known about this before, I’d of been down here before,” Ragula said.

KRDO has contacted the owner of the horses.  She said she was talking with deputies and declined to comment.  Newschannel 13 also discovered a website registered to the owners offering to sell “cutting horses.”

Friends, besides how much information the Associated Press and ABC News reports left out of their version, the local News gives so much more insight as to what the horrible scene was actually like when it was discovered.

KRDO's report paints a much more vivid picture of the neglected conditions of those poor horses.

Another point is that it appears strange that ABC News states that a "Sgt. Gregory White says investigators could not legally seize the living horses because they were not in immediate danger. Authorities gave them water and food. White says the horses' owner has been cooperative in making a plan to improve their health and conditions and has agreed to clean the property."

That, while the KRDO report says the owner is declining comment seem strange..

While both reports do not say what consequences will take place against the owner -- one can hope by reading the KRDO report in that the owner's decline to comment means that she is facing legal problems.

Then on September 22, the El Paso County Sheriff's Office issued a release at 10 p.m. Saturday updating its investigation into horses at a barn in Black Forest.

The release reads as follows:

"There has been a great deal of outcry about the situation involving the horses in the Black Forest area. We recognize this to be an emotional issue for many citizens, and in light of that, the Sheriff's Office would like to provide some additional facts about the case.

Friday, September 19, 2014, members of our Investigations Division and our Mounted Unit, skilled in the investigation of animal cruelty and neglect cases involving horses, responded to the property off of Burgess Road to conduct the initial investigation.

After our investigators arrived on scene, they determined that while the appearance of the animals was visually disturbing, none of the horses were in immediate danger and none of them had to be euthanized. As such, investigators had no legal right to seize the horses at that time. We are looking into the cause of death of the deceased animals.

Members of our Mounted Unit are in contact with the horse owner, who is cooperating and receptive to working on a plan of action for continuing care of the animals and improving their living conditions. They have been provided with fresh food and water, (which they had along along) and the owner is making arrangements to further clean up the property.

Rest assured, had any of the animals been in imminent jeopardy, they would have been removed from the location. The Sheriff's Office has had to do that in previous instances and would not have hesitated in this case should it have been necessary. We have a number of large animal rescue groups we work with in those cases.

The Sheriff's Office truly appreciates the outpouring of concern the citizens have shown in this case and will make use of the generous offers should they become necessary.

At the same time that the Sheriff's Office released their statement, KRDO ran the following story:

Update on Horses Left to Rot in a Barn

The owner of a dozen horses left to rot in a barn in Black Forest is taking care of several of the animals that have survived.

Horse carcass after carcass was uncovered by a renter on the property Friday (9/19/14) afternoon.

Sergeant White said no information will be coming out until next week.

In the meantime, the other animals remain at the barn in black forest, but Sergeant White says the mounted unit is working with the owner to make sure the horses "get the care they need."

There are about eight living horses and some alpacas on the property.

The living horses appear neglected with hooves grown out, and ribs and bones showing.

Friends, like Diana Ragula, I want to see justice for what took place.

If you have been like me and have wondered why some people think there are no consequences to their actions -- even if they have been reported to have starved a dozen horses to death -- it is probably because the law does nothng in response to their actions
It is apparent that the owner who is responsible for this crime will still be permitted to own horses in the future -- as well as not face jail time for what she has done already.

So yes, because of the failure of the El Paso County Colorado to enforce animal cruelty laws and take action, I believe that you too can starve a dozen horses to death, attempt to cover it up, have no consequences for your actions, and be allowed to possibly do it again in Colorado.