What is a "Horse Breed"?

Every once in a while one of you will write to ask a question that has more to it than one would think. This is just the case with a letter that I received recently.

She said she was doing a project on horses for a High School class. And yes, my young reader said she wanted a longer answer than just what her Mom told her when she asked, "What is a Horse Breed?"

Her mom's answer, "A horse breed is a type of a horse."

So here goes, a longer answer to what sounds like a simple question.

Some are selectively bred domesticated horses, and others have created a breed onto themselves such as the American Wild Horse -- also known as Mustangs.

In the later case, it is a matter of "Natural Selection" in the wild. Which, of course, is the gradual process by which biological traits become either more or less common in a population as a function of the effect of inherited traits on the differential reproductive success of organisms interacting with their environment.

While that sounds like biology gibberish, the easy answer about Natural Selection regarding horses is that horses from different breeds are still horses and consequently can breed together. Yes, since horses are horses, biologically, they have the means to make babies.

Horses reproducing with horses is fine. It will work, they can mate, and produce horses. Any breed can of horse can breed with any other breed of horse.

If one breed has babies with a horse of a different breed, that's called "cross-breeding". The result being called a "crossbred" horse.

Over time, as the crossbred horses mate together, or breed, with more and more and over many years of that taking place -- they evolve into a breed of their own. This is what took place with Mustangs during their evolution.

The first Mustangs descended from Iberian horses brought to Mexico and Florida. Most of these horses were of Andalusian, Arabian, and Barb ancestry. As they crossbred, they created a horse breed we call the American Mustang.

One analogy is that horses are a lot like the American people today. If we look at today's American Wild Horse, the Mustang, we will most likely see a breed of horse that is a lot like most of Americans today in that most Americans are made up of multiple nationalities in their lineage.

With more and more of us meeting and marrying and making babies with others whose family nationality ancestries are different than our own, today most Americans are made up of various nationalities -- people who came to the United States from different nations.

Take for example my family. While my personal ancestry is all Portuguese because my great-grandparents were from Portugal, through something a lot like the idea of "natural selection," today my family is made up of parts of many nationalities and races.

This variety of nationalities and breeds can probably be referred to as breeds -- although I know that the Politically Correct police will not like me putting it that way.

While humans show different physical characteristics depending where there ancestry is from, such as darker skin from warmer climates and blond hair from colder climates, horses are the same way.

Some horses are shaggier, some taller, some short, some can take the heat better, and so on. While they are all horses, many breeds look a lot different from each other.

As for my family, like the American Mustang, now besides us having Portuguese ancestry and bloodlines, through marriages and having babies my family's ancestry now also includes Spanish, Hawaiian, Samoan, Italian, Mexican, Chinese, Filipino, Black, English, Irish, and many others including which my family proudly refers to as "Okie."

Assisted by years of crossbreeding, my family is a breed (nationality) of people called  "Americans." We are a melting pot born in the USA.

Frankly, my family is like the majority of Americans today. And yes, this sort of thing is really no different than the crossbreeding that took place to evolve and give us the American Mustang.

While the American Mustang are descended from both Spanish horses and other feral or wild horses escaped from various sources, the purebred Spanish Mustang is actually a modern breed that differs from the "wild" American Mustang in appearance and ancestry.

Those horses are not crossbreds, but instead are considered "purebreds."
While there are certainly domesticated crossbred horses, "purebreds" such as say American Quarter Horses are often bred with pedigrees recorded in a breed registry.

If you have, for example an American Quarter Horse that has no other breed in it, then it is a "purebred."

Purebreds, also called "purebreeds", are horses that have only been bred within a selective breed of horse.  In some purebred horses, one can actually trace their lineage or ancestry.

My horse Murphy was what is referred to as a "papered" or "registered" Quarter Horse. He was registered with the American Quarter Horse Association (AQHA) and his lineage could be traced back to some real champions in Quarter Horse history -- Poco Tivio and Poco Bueno.

If the lineage of a purebred animal is recorded, that animal is said to have a "pedigree" or be "pedigreed".

The term purebred is occasionally confused with the proper noun "thoroughbred" which actually refers exclusively to the specific breed of horse called Thoroughbred Horses.

A purebred animal should never be called a "thoroughbred" unless that horse is actually a registered Thoroughbred Horse.

And yes, the term "horse breed" is sometimes used in a very broad sense and depending on the definition, as hundreds of "breeds" exist today, all being developed for many different uses.

Horse breeds are loosely divided into three categories based on general temperament:

1) "Hot bloods," spirited with speed and endurance, such as an American Quarter Horse;

2) "Cold bloods," heavy work slower horses, such as Draft horses and some ponies; and

3) "Warmbloods," which were developed from crosses between hot bloods and cold bloods, often focusing on creating breeds for specific riding purposes.

Horse breeds are groups of horses with distinctive characteristics that are transmitted consistently to their offspring, such as conformation (build), color, performance ability (such as athleticism), or disposition (such as being easy going with children).

These inherited traits are usually the result of a combination of natural crosses and artificial selection methods aimed at producing horses for specific tasks.

Certain breeds are known for certain talents such as having speed and endurance. For example, American Quarter Horses are known for their speed in quarter mile racing.

And yes, most modern horse breeds are developed in response to a need for "form to function" -- meaning that they are being bred out of the necessity to develop certain physical characteristics in order to perform a certain type of work.

For example, since it is believed that a pair of fast Thoroughbred Horses produce fast offspring, beyond the appearance and conformation of the specific type of horse, most breeders aspire to improve physical performance abilities.

This concept, known as matching "form to function," has led to the development of not only different breeds, but also families or bloodlines within breeds that are specialists for excelling at specific tasks.

Because of the diverse needs of people around the world, we have powerful but refined breeds such as the Andalusian and the Lusitano which was developed in the Iberian peninsula of Spain and Portugal as riding horses that also had a great aptitude for dressage.

Big heavy draft horses such as the Clydesdale and the Shire were developed out of our need to do very demanding jobs like farm work and pulling heavy wagons -- like the Budweiser Clydesdales which are able to pull several tons of barrels of beer on a single wagon. 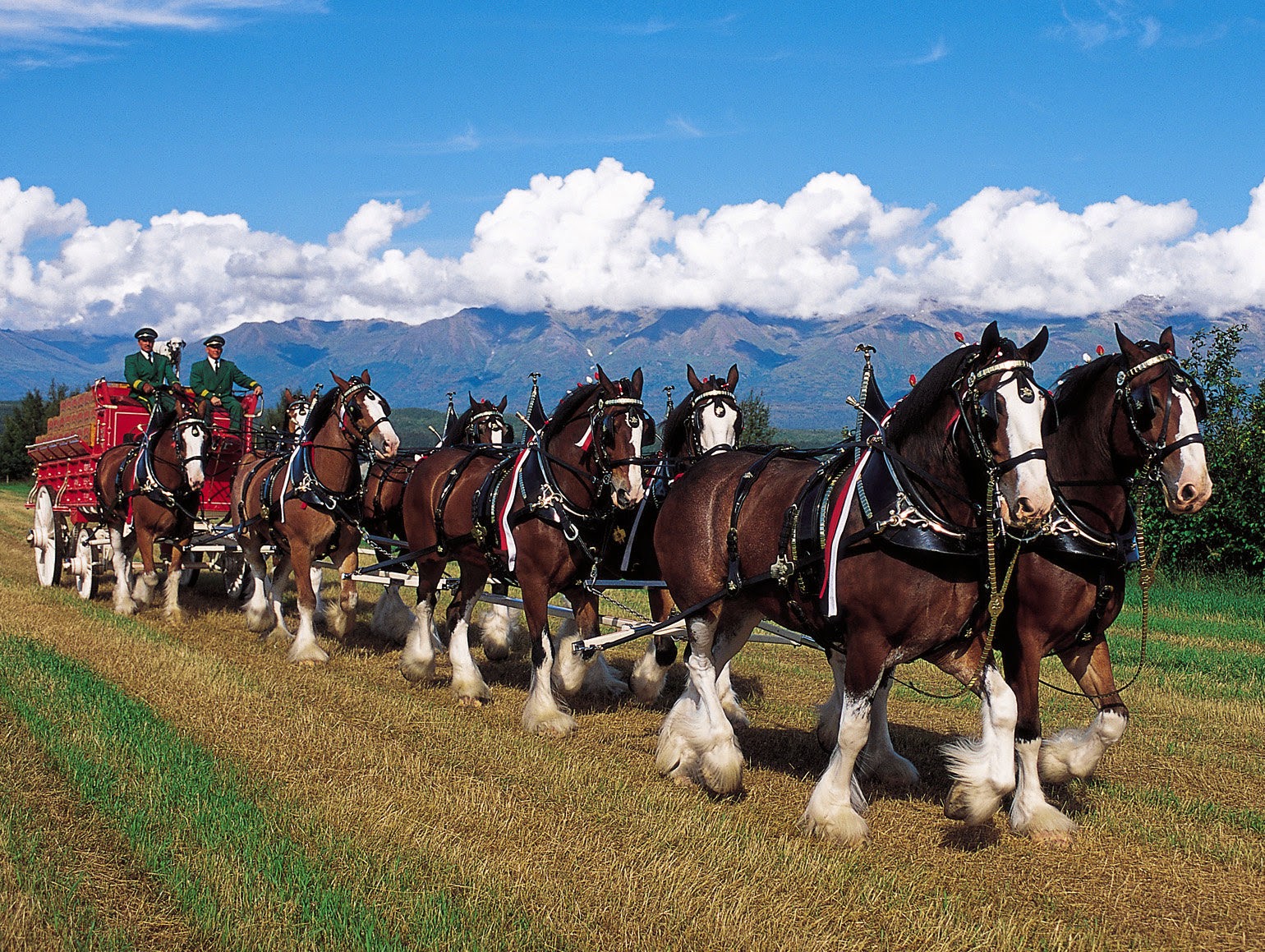 Pony breeds, like many other breeds, were originally bred and crossbred and so on and so on to get horses to meet the needs of people who needed to fulfill specific jobs and transportation needs.

Many horse breeds were developed specifically for light agricultural work, heavy and light carriage pulling, road work, and other disciplines such as ranch work which needed horses for gathering and brandings, cutting and roping.

Some breeds have been developed through centuries of crossbreedings with other breeds, while others, such as Tennessee Walking Horses and Morgans, developed from a single sire from which all current breed members descend.

No they are not a breed of horses, but they are all about Equus.

Equus is a genus of mammals which includes horses, donkeys, and zebras.  The term equine refers to any member of this genus, including horses and other members of the horse family.

Members of the same family, they can breed and produce offsprings.

Since a donkey (or ass) is a domesticated member of the Equus family called Equidae, they can breed with horses.

The size of a mule and work to which it is being bred for is dependent largely on the breeding of the mule's dam (mother).

Mules can be lightweight, medium weight, and even of moderately heavy weight when produced from draft horse mares.

So now we know that a purebred horse has only been bred within one specific breed of horses, and we know that a crossbreed is a horse made up of more than one horse breed.

We also now know that horses can crossbreed with other equine "species" such as donkey to produce hybrids such as a mule which are not a horse breed because they are made up of more than one equine species.

Some horse breeds are huge while other breeds are very small in isolated areas of the world. And yes, it is estimated that there are about 750 million horses in the world.

Those 750 million horses are all part of the over 300 different breeds of horses and ponies around the world right now.

And as for my young reader who asked this question, I hope this helped you. And no, I don't mind what part of this you need for your school project.