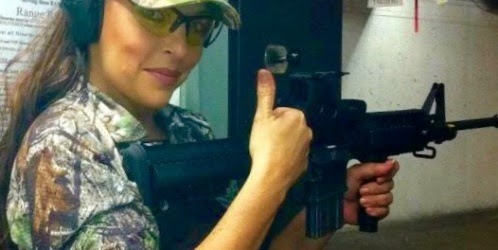 Ms. Morgan states, "I officially declare my business, The Gun Cave Indoor Shooting Range, a MUSLIM FREE ZONE. I have made this decision based on the following FACTS:

1) The Koran, which I have read and studied thoroughly, and which all Muslims align themselves with, contains 109 verses commanding hate, murder and terror against all human beings who refuse to submit or convert to Islam.

2) My life has been threatened repeatedly by Muslims who are angry that I have studied their Koran, know it better than most of them, and am exposing the vileness of their so called "Holy Book" and its murderous directives.

3) The barbaric act of beheading an innocent American in Oklahoma by a Muslim, the Boston bombings, and the murder of 3000 innocent people on 9/11 are more than enough loss of life on my home soil at the hands of Muslims to substantiate that Muslims can and will follow the directives in their Koran and kill here at home.

4) Because the nature of my business involves firearms and shooting in an enclosed environment, my patrons are not comfortable being around muslims with guns. Can you blame them?

5) My range rents and sells guns to my patrons.

Why would I want to rent or sell a gun and hand ammunition to someone who aligns himself with a religion that commands him to kill me?

6) The Muslim Brotherhood has a documented plan for the destruction of America from within, discovered by our own government during a raid of MB operatives in America.

In addition, the civilization jihad under way in my country by American muslims.

In a number of states Muslims, through our legal system, are trying to force us to accept Sharia Law over Constitutional law.

I do not wish to do business with people who stand against the Constitution and are fighting to replace it.

7) Muslims, who belong to and or support ISIS, are threatening to kill innocent Americans.

Muslims, who belong to or support AL Qaeda, are threatening to kill innocent Americans.

Muslims who belong to or support HAMAS are threatening to kill innocent Americans.

8) Islam allows Muslims to kill their own children (honor killing) if the behavior of those children embarrasses or dishonors the family name.

Did you know that dating outside of the faith is justification for murdering their daughters and this has already occurred on American soil?

Why would I want people who believe it’s okay to murder their own children, be in the presence of other children?

My patrons often bring their kids to the range to teach them to shoot. I am responsible for providing a safe environment for those children to learn gun safety and shooting sports.

9) In the 14 hundred year history, Muslims have murdered over 270 million people. Not all muslims are terrorists, but almost all terrorists in the world right now are muslim.

Since you can’t determine by visual assessment, which ones will kill you and which ones will not, I am going to go with the line of thought that ANY HUMAN BEING who would either knowingly or unknowingly support a "religion" that commands the murder of all people who refuse to submit or convert to that religion, is not someone I want to know or do business with.

I hold adults accountable for the religion they align themselves with."

Considering the political pressure from the Liberal Left, the Democrat Party, the Obama White House, and their control on the Justice Department -- this is a brave move.

While I support her move to exercise her right to refuse service to anyone, especially those she feels may indeed be a threat to others at her facility, I can't help but fear for her ability to stay in business since it is so politically incorrect to take such a gallant stand.

She has my respect and admiration because her reasoning is very sound and justifiable.

Why do I feel that way, well about 20 years or so ago there was a privately owned indoor range in Milpitas California which had an incident where a shooter took his own life on that range.

At the time, the range owner was asked "Why did you allow him to shoot there?"

The owner responded that he did not know the man, or where his head was at the time.

Jan Morgan does not have that problem. She is cutting down on her liability by taking proper precautions and banning persons who share a belief of hate and violence against anyone not of their religion. To avoid potential harm for those using her facility, she is refusing service to those she she as violent.

She may be a model for others to follow in the future. It may be beneficial to other businesses to examine what sort of customers they have to determine whether or not Muslims they cater to are indeed a threat to others around them.