Rebekah Rorick, who attends an Upstate New York high school, had the picture above turned down by a yearbook committee.

An upstate New York school district has shot down a high school that said no to a senior’s yearbook photo because it shows her posing with a gun.

Rebekah Rorick submitted the picture for inclusion in the 2015 Broadalbin-Perth High School yearbook only to have it rejected by a faculty member on the yearbook committee due to the weapon.

"I was ready to cry. I didn’t know what I was going to do. The only thing I thought to do was address it."

The photo above shows a smiling Rebekah in a classic hunting pose. She is kneeling next to her dog as she holds a hunting rifle upright in her left hand. Nothing wrong with that, it is an American Classic pose.

"My family has always hunted," Ms Rorick told local station WTEN. "It’s something I do with my family, and my dog is my best friend. So I decided to put her in the photo. I fell in love with [the picture]. It’s my favorite photo of all time right now."

Accompanied by her father, Rorick appeared before the school board Monday evening to appeal the rejection.

"We are in the foothills of the Adirondacks," Michael Rorick told the school board, according to the Gloversville Leader Herald.

He and his daughter also pointed out that a senior’s photo in the 2012 yearbook showed him with a rifle.

After meeting behind closed doors, the school board ruled Rebekah’s photo appropriate for the yearbook.

"There wasn’t any reason not to (allow it)," president Robert Becker told the newspaper.

He said he understood the school’s initial reaction to the photo, saying it was due to what he called "heightened sensitivity to firearms" in schools.

Broadalbin-Perth Central School District Superintendent Stephen Tomlinson told WTEN that the photo does not violate the district’s policy against weapons.

"She is not holding the gun in a malicious manner," he said. "She is not pointing it anywhere. It’s to me, in my opinion, a nice photograph of a young lady in the Adirondack region that enjoys hunting."

Dear friends, I cannot tell you how refreshing it is to see common sense raise its head in any school district these days!

Maybe this sort of Common Sense will become catchy. We can only hope!

On December 15, 2014, an Alabama family that had fallen victim to a home burglary just a week earlier happened to spot the suspected intruders as they drove down the street.

No, they didn’t let them escape.

According to WBRC-TV, the Wyatts happen to spot the three intruders as they drove down a neighborhood road after committing yet another break-in robbery at different house.
As soon as they caught a glimpse of the crooks, the family followed their vehicle, stopped them and held them at gunpoint until police arrived on the scene.

Jefferson County Sheriff’s deputies later arrived on the scene and took a man and two women into custody.

Surveillance footage captured the suspects breaking into the Wyatt family home. The three jerkweeds stole two TVs and even several Christmas presents -- including gifts for the family’s 1-year-old baby boy.

As officers investigated the crime at that house, they received a phone call from the Wyatt family notifying them the suspects were being detained at gunpoint.

Sarah Wyatt told WBRC that they hope they will get their stolen items back, saying, "Sure hope so, if they don’t at least we’re all safe and in one piece and they are off the street for now." .

So yes, especially in rural America, when seconds count -- the police are minutes away. That is why armed citizens are the best defense against crime.

And yes, this is just another great example proving why we have a 2nd Amendment. .

I really hope this wonderful family feels the thanks of many for putting these thieves behind bars.

The Republican Congress is set to make the Soldiers who were victims of the 2009 Fort Hood Terrorist attack eligible for Purple Hearts and combat injury benefits.

As shameful as it is, the Obama administration immediately labeled the Muslim terrorist attack as "work place violence" and has staunchly denied those Soldiers their combat status for the past five years.

House Republicans, working with the Democratic-controlled Senate Armed Services Committee, added a provision to the defense authorization bill that would give battlefield recognition for the victims of the deadliest attack on a domestic military installation in U.S. history. It passed on a voice vote with strong bipartisan support.

The measure, which is expected to pass Congress next week, also would end a five-year effort by Texas Republican Reps. John Carter, Michael Conaway and Roger Williams to give the victims of the Muslim attack combat status, the Military Times first reported.

The victims of that horrible day have long asked the Pentagon to label the attack "terrorism" so they would be eligible for the Purple Hearts and added combat-related benefits -- which of course means that they would get help with medical needs resulting from that day.

President Obama, and Defense Secretaries Robert Gates, Leon Panetta and Chuck Hagel have downplayed the terrorist attack for many political reasons including not trying to upset Muslims.

They have stuck to their original claim that the attack by Army psychiatrist Major Nidal Hasan was merely an act of workplace violence.

The new language in the defense bill says Purple Heart medals can be awarded to "members of the armed forces killed or wounded in domestic attacks inspired by foreign terrorist organizations," according to the Military Times.

Hasan killed 13 people and wounded 32 in the assault on the Army post in Killeen, Texas.

Survivors, many who suffered from multiple bullet wounds, have spent the past five years trying to rehabilitate their bodies and rebuild their lives. Many have had to pay tens of thousands of dollars in medical bills on their own.

If this goes through, the new benefits provided through legislation would be helpful indeed.

The victims point out that Hasan had several email exchanges with top al Qaeda leader Anwar al-Awlaki about the attack and whether the attack was justified to “protect our brothers,” and followed Awlaki’s advice to scream “Allahu Akbar” (“God is Great”) to invoke fear before starting to shoot.

Until his death by a drone airstrike in 2011, Yemen-based Awlaki was one of the United States’ top enemies.

In August, victims of the Fort Hood shooting also pointed to news of a letter from Hasan to Islamic State of Iraq and Syria leader Abu Bakr al-Baghdadi as further evidence that the 2009 attack was a terrorism attack.

In the undated two-page letter, Hasan asked to become a member of the extremist Islamic group and said it would be an honor to become an “obedient citizen soldier” for Islamic State and signed the missive with his name and the abbreviation “SoA,” or “Soldier of Allah” — the same identification he used on business cards before the shooting.

In a speech on the House floor Representaive Carter said the FBI and the Defense Department were aware of Hasan's radicalization as early as 2005 but dismissed concerns about him "in the name of political correctness."

Five years ago, Rep Carter said, Obama promised to protect the victims of the shooting, personally assuring them he would at a memorial service for those who died in the attack.

"Our communities have suffered long enough in the name of political correctness," he said. "I'm very proud that my colleagues in the House and Sens. Cornyn and Cruz have not dropped the ball."

"We have stood for the Fort Hood community and the victims of this terrorist act even when the president failed to act," he added.

Representative Williams argued that the Obama administration's "negligence" has cost some of the victims to pay hundreds of thousands of out-of-pocket costs for medical treatment.

One victim, he said, was pulled off active duty and her paycheck was reduced from $1,400 a month to $200 a month and she lost her military health insurance. Others, he said, scraped by on disability payments.

Sgt. Alonzo Lunsford, who was shot seven times, was turned away when he tried to check into an Army PTSD (Post Traumatic Stress Disorder) clinic because he was not injured in combat, according to Rep. Williams.

"This is not the definition of taking care of our nation's heroes," he said. "The [defense authorization bill] gives the Obama administration yet another opportunity to honor his pledge to provide for these men and women who were victims of terrorism."

It is a sorry thing when we have to wait until we get Democrats out of the Senate before we can arrange justice for those who faced a combat at Fort Hood.

Hopefully this will come as a relief to the brave victims there that day. 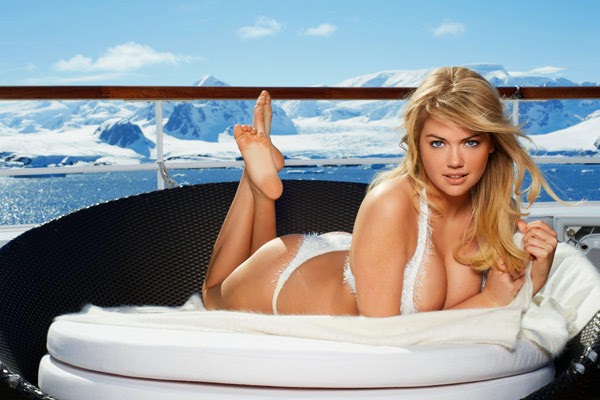 The magazine is famous for naming the "Sexiest Man Alive" and "Most Beautiful," but the 22-year-old Sports Illustrated model is the first woman to be awarded the "Sexy" title. 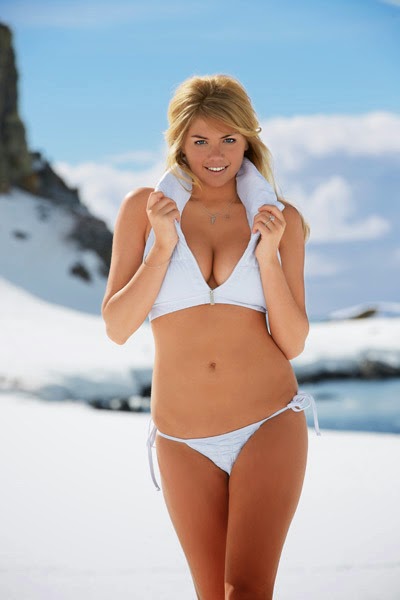 "Sexy to me means someone who is confident and happy and that's the person I always strive to be," she said to the audience as she accepted the honor.


Kate Upton is the picture of the All American woman that is healthy and sexy. She has classic curves, and a beautiful face.

How can anyone not gay not see her as sexy? She is simply beautiful.


Now, as you can tell, I've made it real clear that I like the way she looks.

So why have I stressed the point, because I am sick and tired of Hollywood, television, and the advertising industry promoting emaciated women who look like Nazi Concentration Camp survivors as the new standard of beauty when they are not.

The modeling industry is promoting a bad example of beauty. The models they prefer today are sickly. Yes, they look like Jewish Holocaust Death Camp survivors. 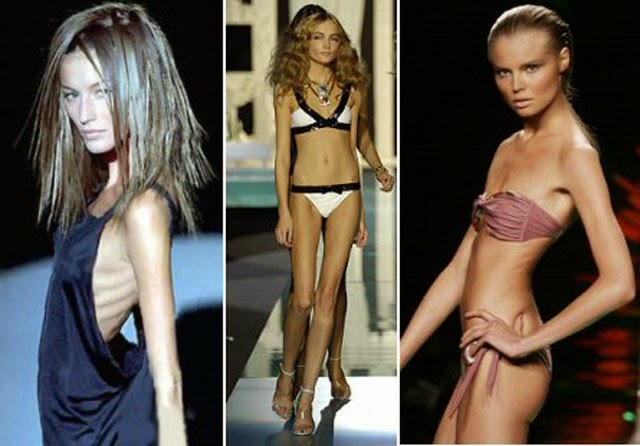 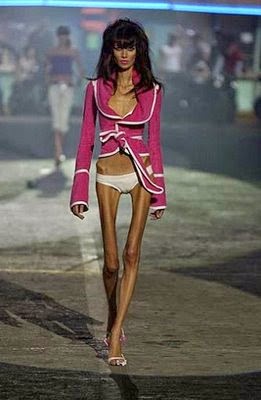 The above pictures are runway models, the picture below is from 1945 taken at one of the Nazi Death Camps. See my point. 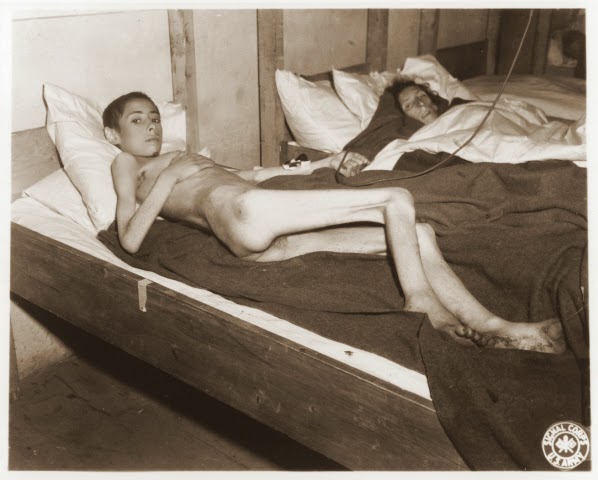