Obama Confesses He Spends Most of His Mornings Watching ESPN 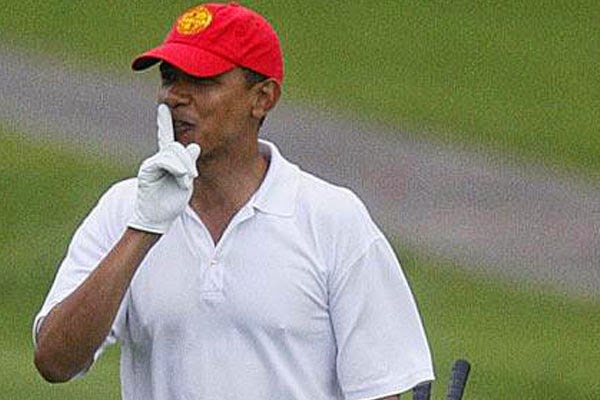 
President Obama discussed his morning ritual lately with ESPN radio host Colin Cowherd, and admitted that he spends most of his morning watching ESPN.

“Listen, I spend most of my time watching ESPN in the morning,” Obama said. “I get so much politics I don’t, you know, want to be inundated with a bunch of chatter about politics during the day.”

The Washington Free Beacon notes that the Government Accountability Institute reported Obama has missed 62.5 percent of his daily intelligence briefings during his presidency. The White House has responded to such reports by arguing that written reports are as effective as briefings.

This revelation from the First Black President that he spends his time on sports might fit a racial stereotype of sorts, but let's not go there.

Instead, let's focus on the lack of WORK being done and all the leisure time this Bozo has. Yes, leisure time.

Friends, now we find out that if he's not on some golf course -- he's watching ESPN most of his mornings.

With his lying to the public about ObamaCare and sitting around watching ESPN, or playing golf, or playing basketball, yes that qualifies him to be called a "Lazy Liar" who obviously doesn't like to work.

Again, not trying for the racial stereotype here, but he sure makes it hard not to ask if he were White would he be able to get away with this? The answer is, like with most things about his presidency, probably not.

Obama has a real history with ESPN. Maybe one that he can use to get a job once he leaves office? Maybe he can get his own show? Maybe one called "Focus On Barackatology"?

Yes, after entering office in 2009, Obama charted the NBA Finals in something he referred to as "Barackatology."

And yes, even though Obama caught flak from legendary Duke college basketball coach Mike Krzyzewski, who said, "the economy is something that he should focus on, probably more than the bracket," that still didn't stop Obama from spending most of his time on the NBA finals.


And as for golf, Obama is a constant golfer, having played at least 192 times since his presidency began. Compare that to President Ronald Reagan who loved golf but only found time to play 8 rounds in 8 years because he was so busy with the business of the nation.

As everyone knows, besides the constant golf games, he also loves to play basketball. And yes, even Michelle has gotten her face in there with her “dunk” on Lebron James right there in the White House. Obviously the Obama's enjoy sports, just as a lot of Americans do -- but Americans also know there are many  major issues affecting the United States and millions of Americans that need to be addressed.

Is it beyond him to put out a little more effort and diligence to duty than what he is demonstrating?

Rather than who missed their free-throws, Obama should be concerned about tax breaks for middle class Americans, helping small businesses keep their business and create jobs, supporting our allies, strengthening our military, defeating our enemies overseas, paying attention to the Muslim threat, and maybe even take an interest in the security of the United States by securing our borders.

While it might be all fun and games in the White House these days, Obama should shit or get off the pot when it comes to being President. Maybe he should resign and leave running the Executive Branch to smarter people who see life as more than just putting a ball in a hoop.