I've received some pretty interesting mail pertaining to my life-changing experiences, and how NBC's Brian Williams lied about being fired upon -- then said he actually "misremembered" what really took place.

Some have written me asking if what Williams did by repeating this yarn over and over again is the same as those who put on a uniform of a military branch they were never in, called Stolen Valor?

And frankly, I guess it could be the same. After all, there are civilians who have never been in the military who dress up and wear ribbons and medals that they obviously could have never earned. They are lying to people around them.

One reader wrote to ask if all who have had such experiences remember them so clearly? My answer is I don't know if "all" do.

I can tell you, my readers, that rape victims for example, and yes Veterans with PTSD, certainly do remember things more accurately, more clearing, even when they don't want to. Life-changing events are like that.

Below is an great example of a man who remembered exactly what he went through 74 years ago. This man's name is Joe Langdell. 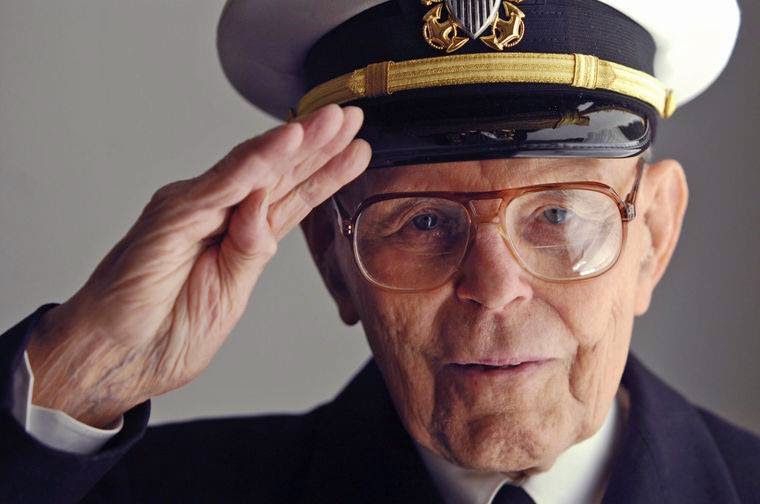 Yes, it is said that Joe Langdell was known for the World War II stories that he told. Yes, what he saw was seared into his memory.

While there are some war stories that are hard to swallow simply because of the source such as with NBC's Brian Williams, Joe Langdell was extremely qualified and didn't have to stretch a story.

Fact is, Joe Langdell was on shore and actually watched his ship, the battleship USS Arizona, sank during the December 7th, 1941, surprise attack on Pearl Harbor by the nation of Japan.

People say he had an outgoing personality, that he was a fixture in Marysville's annual Veterans Day parade, and had an affinity recounting the historic attack.

He had been living at The Fountains care facility in Yuba City.

"He talked to anybody about it," said John Langdell of Spearfish, S.D., one of his two sons. "He relished being the center of attention. That was part of his makeup." said his son Ted Langdell, who lives in Marysville. "I guess you might say he was creating an endearing character over there."

Joe Langdell's death came nearly four months after his 100th birthday. Ted Langdell was there holding his hand when he passed away.

Riding in a wheelchair, Joe Langdell took part in November's annual Veterans Day Parade in downtown Marysville. His presence in the parade became a focal point for the yearly event.

John Langdell said his father's remains will be interred at the site of the USS Arizona, the ship on which he served, next Dec. 7. A local public memorial service will likely be held in April, he said.

Don Schrader, a local veterans advocate and a board member of the Museum of Forgotten Warriors in Yuba County, noted Langdell visited the museum from time to time.

"He went to the parades and always wore his uniform," Schrader said. "It's the passing of an era. It is unfortunate, but we are losing those guys."

Schrader also noted that Langdell seemed to take pleasure in letting people know about his wartime experiences. "I think he enjoyed it greatly, and I think he was very proud of it. And he should have been."

"It certainly was the focal point of his service in the Navy and the attack on Pearl Harbor was the center of his life," John Langdell said of his father. "He took pride in it."

Back on Decemmber 7th, 1941, Joe Langdell was a 28 year old officer asleep on Ford Island when the attack happened. He watched helplessly from shore as his ship, the USS Arizona, sank. With her, all toll 1,177 sailors aboard were lost.

Retiring as a Lieutenant Commander (Lt. Cmdr.), Joe Langdell is believed to be the last surviving officer assigned at that time to the USS Arizona. He was recently one of only seven survivors from the ship.

Joe Langdell said that he likely would have been killed if he had been on board the Arizona when it was attacked.

Langdell helped other men wade to shore and get to the hospital. Later he was one of the men to go with 15 others who had sheets and pillowcases to gather all the bodies above the waterline.

"You'll always remember it," Joe Langdell said at the time. "It's a milestone in your life — one of the most important battles in the world, in world history, and I've got my medals to tell about it."

Born Oct. 12, 1914, in Wilton, N.H., Joe Langdell was employed as a salesman after the war and, with his wife, sought out the warmer California climate, first in the Bay Area and later in Yuba City. He was a former owner of the Village Mart store in Yuba County.

Yes, retired Lt. Cmdr. Joe Langdell, the oldest living survivor from the USS Arizona, passed away at the age of 100.

Cmdr. Langdell requested that his ashes be interred with his fellow shipmates inside the USS Arizona, which will take place on December 7th.

Please join me in offering a prayer for Retired Lt. Cmdr. Joe Langdell, for his loved ones, and for all the men and women who serve throughout the world.

And please, let's not forget to thank God for the service of those who have given their lives to preserve and protect our freedom. May God bless them all.

Frankly, while it makes me angry, I also feel sort of sorry for those folks out there like NBC's Brian Williams who say they "misremember" or lie about something that would truly be a life-changing event, something that sears itself into your memory.

Asto my reader's question whether NBC's Brian Williams is guilty of Stolen Valor? Well, that is a term applied to people who falsely claim military service they did not perform, experiences that never happened, and other tales of military daring that only exist in their minds.

Ask yourself if Williams fills that definition? I think it is justifiable for people to say he is.

Cmdr. Langdell didn't have to worry about that because he lived it.