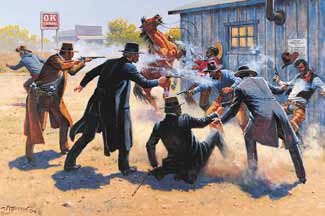 Ever wonder if there was media bias in the news back in the Old West?

Here is how the The Tombstone Nugget covered the gunfight near the OK Corral compared to how The Tombstone Epitaph covered it. If you read both, you will be surprised that they were both covering the same shooting and how they came up with two different views of what took place.

Marshal Virgil Earp, Morgan and Wyatt Earp and Doc Holliday Meet the Cowboys - Three Men Killed and Two Wounded, One Seriously - Origins of the Trouble and its Tragic Termination.

The 26th of October, 1881, will always be marked as one of the crimson days in the annals of Tombstone, a day when blood flowed as water, and human life was held as a shuttlecock, a day always to be remembered as witnessing the bloodiest and deadliest street fight that has ever occurred in this place, or probably in the Territory.

The origin of the trouble dates back to the first arrest of Stilwell and Spencer for the robbery of the Bisbee stage. The co-operation of the Earps and the Sheriff and his deputies in the arrest caused a number of cowboys to, it is said, threaten the lives of all interested in the capture. Still, nothing occured to indicate that any such threats would be carried into execution.

But Tuesday night Ike Clanton and Doc Holliday had some difficulty in the Alhambra saloon. Hard words passed between them, and when they parted it was generally understood that the feeling between the two men was that of intense hatred.

Yesterday morning Clanton came on the street armed with a rifle and revolver, but was almost immediately arrested by Marshal Earp, dismissed and fined by Justice Wallace for carrying concealed weapons. While in the Court room Wyatt Earp told him that as he had made threats against his life he wanted him to make his fight, to say how, when and where he would fight, and to get his crowd, and he (Wyatt) would be on hand.

In reply, Clanton said: “Four feet of ground is enough for me to fight on, and I’ll be there.” A short time after this William Clanton and Frank McLowry [sic] came into town, and as Thomas McLowry was already here the feeling soon became general that a fight would ensue before the day was over, and crowds of expectant men stood on the corner of Allen and Fourth streets awaiting the coming conflict.

It was now about two o’clock, and at this time Sheriff Behan appeared upon the scene and told Marshal Earp that if he disarmed his posse, composed of Morgan and Wyatt Earp, and Doc Holliday, he would go down to the O.K. Corral where Ike and James [sic] Clanton and Frank and Tom McLowry were and disarm them. The Marshal did not desire to do this until assured that there was no danger of attack from the other party.

The Sheriff went to the corral and told the cowboys that they must put their arms away and not have any trouble. Ike Clanton and Tom McLowry said they were not armed, and Frank McLowry said he would not lay his aside.

In the meantime the Marshal had concluded to go and, if possible, end the matter by disarming them, and as he and his posse came down Fremont Street towards the corral, the Sheriff stepped out and said: “HOld up boys, don’t go down there or there will be trouble: I have been down there to disarm them.”

But they passes on, and when within a few feet of the the Marshal said to the Clantons and McLowrys: “Throw up your hands boys, I intend to disarm you.”

As he spoke, Frank McLowry made a motion to draw his revolver, when Wyatt Earp pulled his and shot him, the ball striking on the right side of his abdomen. About the same time Doc Holliday shot Tom McLowry in the right side using a short shotgun, such as is carried by Wells-Fargo & Co.’s messengers.

IN the meantime Billy Clanton had shot at Morgan Earp, the ball passing through the point of the left shoulder blade across the back, just grazing the backbone and coming out at the shoulder, the ball remaining inside his shirt. He fell to the ground but in an instant gathered himself, and raising in a sitting position fired at Frank McLowry as he crossed Freemont Street, and at the same instant Doc Holliday shot at him, both balls taking effect either of which would have proved fatal, as one struck him in the right temple and the other in the left breast.

As he started across the street, however, he pulled his gun down on Holliday saying, “I’ve got you now.” “Blaze away! You’re a daisy if you have, ” replied Doc. This shot of McLowry’s passed through Holliday’s pistol pocket, just grazing the skin.

While this was going on Billy Clanton had shot Virgil Earp in the right leg, the ball passing through the calf, inflicting a severe flesh wound. In turn he had been shot by Morgan Earp in the right wrist and once in the left breast. Soon after the shooting commenced Ike Clanton ran through the O.K. Corral, across Allen Street into Kellogg’s saloon and thence into Toughnut street where he was arrested and taken to the county jail.

The firing altogether didn’t occupy more than twenty-five seconds, during which time fully thirty shots wree fired. After the fight was over Billy Clanton, who, with wonderful vitality, survived his wounds for fully an hour, was carried by the editor and foreman of the Nugget into a house near where he lay, and everything possible was done to make his last moments easy. He was “game” to the last, never uttering a word of complaint, and just before breathing his last he said, “Goodbye boys; go away and let me die.” The wounded were taken to their houses, and at three o’clock next morning were resting comfortably.

The dead bodies were taken in charge by the Coroner, and an inquest will be held upon them at 10 o’clock today. Upon the person of Thomas McLowry was found between $300 and $400 and checks and certificates of deposit to the amount of nearly $3,000.

During the shooting Sheriff Behan was standing nearby commanding the contestants to cease firing but was powerless to prevent it. Several parties who were in the vicinity of the shooting had “narrow escapes” from being shot. One man who had lately arrived from the east had a ball pass through his pants. He left for home this morning.

A person called “the Kid” who shot Hicks at Charleston recently, was also grazed by a ball. When the Vizina [mine] whistle gave the signal that there was a conflict between the officers and cowboys, the mines on the hill shut down and the miners were brought to the surface.

From the Contention mine a number of men, fully armed, were sent to town on a four-horse carriage. At the request of the Sheriff the “Vigilantes,” or Committee of Safety, wre called from the streets by a few sharp toots from the Vizina’s whistle. During the early part of the evening there was a rumor that a mob would attempt to take Ike Clanton frm the jail and lynch him, and to prevent any such unlawful proceedings a strong guard of deputtes [sic] was placed around that building and will be so continued until all danger is past.

At 8 o’clock last evening Finn Clanton, a brother of Billy and Ike, came to town, and placing himself under the guard of the Sheriff, visited the morgue to see the remains of his brother, and then passed the night in jail in company with the other.

Shortly after the shooting ceased the whistle at the Vizina mine sounded a few short toots, and almost simultaneously a large number of citizens appeared on the streets armed with rifles and a belt of cartridges around their waists. These men formed in line and offered their services to the peace officers to preserve order in case any attempt at disturbance was made, or any interference offered to the authorities of the law. However, no hostile move was made by anyone, and the quiet and order was fully restored, and in a short time the excitement died away.

The bodies of the three slain cowboys lay side by side, covered with a sheet. Very little blood appeared on their clothing, and only on the face of young Billy Clanton was there any distortion of the features or evidence of pain in dying. The features of the two McLowry boys looked as calm and placid in death as if they had died peaceably, surrounded by loving friends and sorrowing relatives.

No unkind remarks were made by anyone, but feeling of unusual sorrow seemed to prevail at the sad occurrence. Of the two McLowry brothers we could learn nothing of their previous history before coming to Arizona. The two brothers owned quite an extensive ranch on the lower San Pedro, some seventy or eighty miles from this city, to which they had removed their band of cattle since the recent Mexican and Indian troubles. They did not bear the reputation of being of a quarrelsome disposition, but were known as fighting men, and have generally conducted themselves in a quiet and orderly manner when in Tombstone.

The Tombstone Nugget was published from 1880 to 1882. It ceased to exist after it burned down.

I find it pretty interesting just how The Tombstone Nugget covered the gunfight versus how The Tombstone Epitaph covered it. It seems that they came up with two different views of what took place -- just proving that media bias is nothing new in the news business. 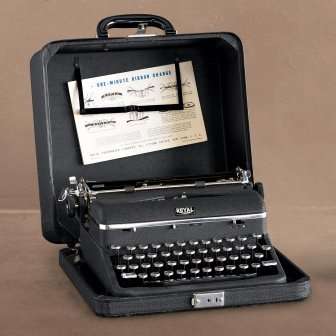