The Start Of My Christmas 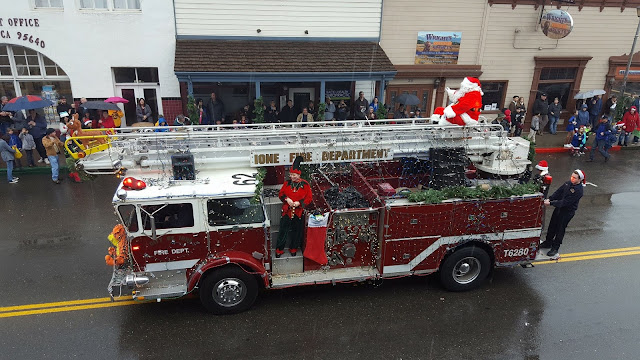 Saturday, December 10th was the official start of my Christmas. It was the day that I help the small town of Ione celebrate Christmas. Yes, Saturday was the Ione Christmas Parade.

Tradition has it that the City of Ione has their annual Christmas Parade on the 2nd Saturday of December. Rain or shine, it starts at 11:00am. And this year, rain it was. In buckets!

But as with most things that are festive and fun, rain or not, folks came out to join in on the fun of taking in the parade on historic Ione's Main Street. Granted us Cowboys had our hats, but there were also umbrellas and folks bundled up for the cold and rain.

The folks there were the die-hards. They were the ones that say this is a great tradition and braved the elements to be a part of it. And with that, they were treated to parade entrants such as high school cheerleaders, classic cars, children singing, tractors, riders atop horses, and of course the arrival of Santa on a firetruck.

The folks in Ione proved once again that their little town is one of big heart. Parents brought out their children to enjoy the parade and meet Santa. And in turn, though pretty wet, Santa was there for them. It is a great Christmas tradition.

And while Christmas traditions have changed a great deal over the years, I'm very happy that the Ione Christmas Parade is one that is still going on. The Ione Business and Community Association puts it on each year, and my family is grateful that they do.

And while it's a pretty safe bet to say that we don't see a lot of Christmas trees adorned in only red balls and silver tinsel, or flocked trees sprayed with cans of fake snow, most trees today are decorated with ornaments of all sorts. From strung popcorn garland to ornaments of one's favorite baseball team, to ornaments with pictures of the grandchildren to bells and dolls, today's trees are decorated in way as diverse as there are people.

We can all be glad that some traditions don't disappear, and decorating a Christmas tree is a wonderful tradition. The modern Christmas tree was developed in Germany and can be traced to the 15th century in which devout Christians brought decorated trees into their homes. The tree was traditionally decorated with edibles such as apples, nuts, or other foods. And yes, they were lit by candles.

After the advent of electricity, folks stopped using candles and we now use Christmas lights. And while traditional ornaments, such as garlands and candy canes, and tinsel are still around, so is our tradition of placing an angel or star at the top of the tree to represent the Archangel Gabriel or the Star of Bethlehem from the Nativity.

Thankfully the traditional Christmas dinner in early England of the head of a pig prepared with mustard placed in the middle of our dinner table is not observed by many these days, if any these days. That tradition has been replaced with dinners consisting of ham or turkey. Some even brave the fates by cooking ribs, yes ribs! I have first hand knowledge of such an offense to the Saints!  And yes, it was great!

Today we have traditions that many of us may not know of. For example, in Great Britain, according to a 1995 survey, 7 out of 10 Brits buy Christmas gifts for their dogs. And here in the United States, we are all upholding the tradition of overspending. In fact, it is said that Vise cards alone are used an average of 5,340 times every minute in the United States during this time of year.

And while many of us are lead to believe the Friday after Thanksgiving, the day now known as "Black Friday," is the busiest shopping day of the year, that's not true. Fact is, "Black Friday" is believed to be to the tenth busiest day. The week before is the busiest, and the Friday and Saturday before Christmas are the two busiest shopping days of the year.

And as for my fellow writers out there, you who want to write your hit, your "A Christmas Carol" that will live on after you're gone. Well think about this, after Charles Dickens wrote "A Christmas Carol," he wrote several other Christmas stories. In fact, he looked for that second hit by writing one each year. Sorry to say for him, none were ever as successful as the original.

And for me, besides the Ione Christmas Parade, one of my traditions is my reading "The Last Leaf" by O. Henry. To me, that was O. Henry's "A Christmas Carol." And yes,"The Last Leaf" is probably my all time favorite Christmas story.

So yes, my Christmas started last Saturday in the tiny California town of Ione where it has for me for the last 15 years. And now you may ask, why Ione since my wife and I live in Glencoe about 45 minutes away? Well, my mom lives in Ione.

Ione, pronounced "eye-own," was formerly known as the town of Bedbug, Freeze-Out, Hardscrabble, and a few other names. Ione was an important supply center on the main road to the Mother Lode and Southern Mines during the California Gold Rush.

That's right, during the early days of the California Gold Rush, the miners knew the little town by the name of Bedbug and then Freeze-Out. Of course that was before it settled on Ione, which is also the name of Ione Valley which is where the town is located. Unlike other towns in Amador County and the Gold Country, towns which were founded on gold mining, Ione was a supply center, a stage and rail stop. It was extremely vital because it was the agricultural hub for the area.


The town of Ione continued to grow and prosper after its founding. In the 1850s and '60s, a school, churches, a flour mill, and a general merchandise store were built. In March 1865, Camp Jackson was built nearby, and it was garrisoned by Company D, 2nd California Volunteer Cavalry. Yes, Union troops.


By America's Centennial in 1876, Ione is said to have a population of about 600 which included about 100 Chinese who lived in Ione's Chinatown which is no longer around. Of course by then the town included one public school, 4 churches, 3 graveyards, 4 general stores, a meat market, a laundry, one brewery, a couple of restaurants, a millinery shop, six saloons, a drug store and a barber shop. Believe it or not, at the time, Ione even had an art gallery among other things.

So when people from back East or the Mid-West write to tell me how California doesn't have quaint small towns with loads of tradition, I proudly point to Ione and others in the California Gold Country. With a population of just under 8,000 people today, Ione is a great community that has all the charm of a small Western town.

Traditions are established and inherited. They are a behavior, a social contract that says we will pass on a body of beliefs and stories relating to the past that are commonly accepted. It is the handing down of information, beliefs, and customs by word of mouth and by example from one generation to another. Traditions impacts our cultural continuity. Yes, our traditions are the ties that bind us.

As Christians, our Christmas traditions bind us.

Yes, my personal tradition of reading "The Last Leaf" and my wife and I going out to getting our Christmas tree, our watching Hallmark Christmas movies while decorating our tree, celebrating the Ione Christmas Parade together and going shopping with my father-in-law after the parade, our attending a Christmas Party and seeing old friends to sitting down and trying to write about it, these are all parts of my traditions at Christmas.

After my wife and I got home tonight, I went out to check on our horses. It will freeze tonight so I checked their water and gave them a bit more feed to keep them warm through the night. I looked them over and then went out to sit under the stars for a few minutes. Today the sky is very clear and the air is truly crisp.

I looked to Heaven and talked to God as I usually do. For me, while I am fond of churches, I find that I feel closest to God when I look to Heaven in the middle of a clear starry night. It is then that I say what I need to. It is then that I give thanks and humble himself as I remember the small verse that tells us what Christmas is all about, "For unto you is born this day in the city of David, a savior, which is Christ the Lord" (Luke 2:11).

It is a tradition that allows me to personally wish my lord Jesus Christ a very Happy Birthday. And while traditions bind us to each other, this tradition binds me to God.

I hope you have traditions that you do, and that your family does together. I hope you too look forward to this time of year. I hope and pray that you too are filled with the spirit of Christmas.

I hope and pray that you and your family have a very Merry Christmas.