John B. Stetson -- His Legacy 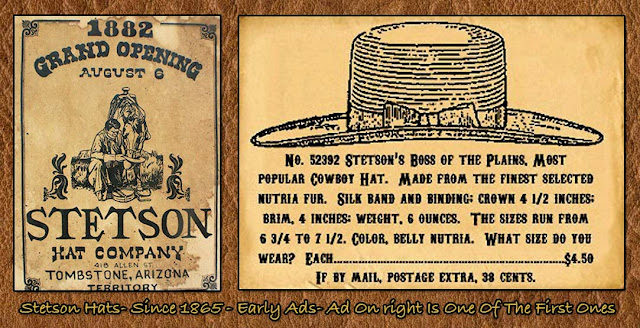 By coincidence, I've gotten a couple of letters, emails recently, which surprising ask me the same question in one way or another, "How would I describe John B. Stetson's legacy?"

I learned a great deal when I wrote about John B. Stetson in my article, John B. Stetson -- "Father Of The Cowboy Hat". So for me, Mr Stetson's positive attributes such as his drive to succeed after trial and error, his ability to identify a need and then have the desire to fill that niche goes to what makes America the land of opportunity. His story is inspiration because he came West to be successful by working for it.

Remember, he started his business in 1865. That was the year the Civil War was ending. The U.S. economy was in a horrible shape. There was a huge recession at the time. Some say it was a small economic depression. While people went West during the California Gold Rush of the 1850s, a lot were returning with empty pockets. One half the nation was reeling from the destruction of the Civil War, while the other half faced major unemployment because of the halt to Northern war production. So imagine starting a business in that atmosphere?

Yes, he found a true niche. A niche that would be filled at all points of the compass, from Texas to Montana, from California to Florida, his hats became a must have items for the man working in the elements.

As I wrote back to a reader who is putting together a book on Mr. Stetson, "As you and I know real well, John B. Stetson is the American West personified in a single item. Yes, the cowboy hat. People might think of horses and Colt .45 Peacemakers, they might think of covered wagons, Indians, and even John Wayne. But as we know, nothing says 'Cowboy' like a Stetson. Yes, a cowboy hat.

And as for today, Stetson makes a number of different styles of hats for all sorts of lifestyles. Yes, you name it and they make it. And yes, today the Stetson company makes all sorts of apparel and accessories. Heck, they even make a fine bourbon whiskey which I've tried and enjoy. 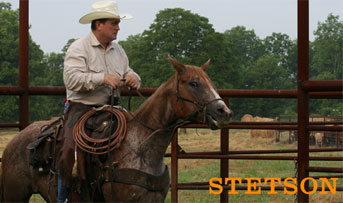 But to find Mr. Stetson's true legacy, go to a rodeo, a penning, a cutting, any sort of Western cattle or horse event, go to cattle auctions, go to gatherings, take a look at what ranchers are wearing, and yes there you will see John B's legacy in one form or another.

His legacy is no different than what a badge is to a cop, without a badge what is he? Without a Stetson, without a cowboy hat, what's a cowboy?

And yes, today the term "Stetson" covers all brands and other makers unless someone is looking for a specific brand of cowboy hat. I walked into a Western Wear store a few days ago and asked "Where are your Stetson's?"

The owner said, "The cowboy hats are along the far wall." Yes, he knew exactly what I was looking for because "Stetson" says it all.

John B's creation, the cowboy hat, is today bought by adults, by both men and women, for themselves and for children. It is part of the Cowboy Culture today just as it was over a hundred year ago at his death. And friends, that ain't a bad legacy.