W.W. Pitman & His Against The Odds Shot 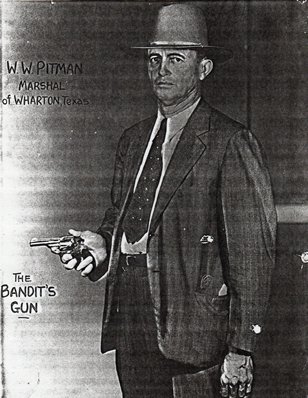 Walter W. Pitman earned his place in gunfighter lore when he fired an against all odds shot. And yes, from what I can tell, it's the only such shot to ever take place in the history of the Old West.

Granted there was another time that an against all odds shot took place in a gunfight. That took place on February 8th, 1887, when at about 8:00pm known gunfighter Jim Courtright called known gambler and gunman Luke Short out of the White Elephant Saloon to meet.

Luke Short was a gambler and friends with the likes of Bat and Jim Masterson the Earps, who were also friends with Marshal Jim Courtright. Short managed the White Elephant Saloon in Fort Worth. Courtright was running a protection racket there at the time.

Like John Wesley Hardin, Jim Courtright had developed a reputation as being fast and accurate with a gun. He needed to make an example of Short who refused to pay. And yes, Short had a sizable reputation as a gunfighter. His reputation was mostly because of a 1881 gunfight with a gunslinger named Charlie Storms at the Oriental Saloon in Tombstone, Arizona. And no, Courtright and Short did not get along.

So when Jim Courtright called Luke Short out of the White Elephant, Short put on his flowered vest and top hat, and made sure his six gun was in his hip pocket before he stepped outside into the street. Once out there, both men walked up the street for about a block until they were in front of Ella Blackwell's Shooting Gallery. No, it wasn't a "shooting gallery". It was a the bar and brothel.

According to reports, the two spoke while walking, but then the two men faced one another as angry words came from Courtright who had been drinking a lot. It was then that he made some indication about Short having a gun, but Short assured Courtright he was not armed. Although he was of course, Short lied to see where it would lead.

At that point Short moved slowly toward Courtright saying that he could have a look for himself. Then Short pulled open his vest to display his not wearing a gun. And really, who knows if Jim Courtright felt embolden by the sight of an unarmed Luke Short, but witnesses stated that Courtright got louder in an attempt to intimidate Short.

It is said that as Short dropped his hands to re-adjust his vest, right then and probably for the sake of bystanders to apparently give the impression of being justified in killing Short in self-defense, Courtright loudly yelled "Don't you pull a gun on me!"

With that, thinking Luke Short was not armed, Jim Courtright drew his pistol. But according to reports, it hung up for just a second on his watch-chain. And in that split second, Luke Short pulled his pistol from his hip pocket and fired first.

Yes, that shot was one of the luckiest shots in Old West history. Short's bullet struck Courtright's right thumb as he was thumbing backing the hammer of his pistol. And yes, his thumb was tore off!

It was gone, and that meant Short had rendered him incapable of firing his single-action revolver with that hand. Please remember that Courtright had a single-action pistol, and subsequently he needed his thumb to cock the hammer back before firing each shot.

Knowing he couldn't do so, Courtright tried to switch his pistol to his left hand. But before he could get off a shot, Short fired what was said to be at least four more shots in quick succession. Yes, at point blank range until his gun was empty.

Jim Courtright is said to have then fell backward. The infamous long haired gunfighter and former lawman hit the ground like a bag of grain. Some say Courtright was dead before he hit the ground. Others say he lingered a while. Either way, Short was still alive because of a lucky shot that tore Courtright's thumb off.

Now compare Luke Short's shot that tore off Jim Courtright's thumbs to what happened to Wharton City Precint 1 Constable Walter W. Pitman, and you may think that it's pretty much a toss for who as had the against all odds shot.

Born January 14th, 1884, west of Muldoon in Fayette County, Texas, Walter W. Pitman was raised to be a farmer and certainly not a gunfighter. And no, in fact, he really wasn't ever a gunfighter.

Fact is, it's said he worked on his family’s farm until he got married in 1904. Then six years later, Pitman, his wife and two children moved to Wharton, Texas.

And as people do during hard times back in the day, he tried to make a living at whatever job he could find. Some say he was a salesman, but that didn't last very long so he returned to farming in 1912. Times were still hard, so in 1916 he ran for the position of Precinct 1 Constable. That was a precinct that included the county seat. And low and behold, Pitman won the election.

Immediately, Walter Pitman, known as "W.W.," cuts a deal with the sheriff to live for free in the jail in exchange for helping him run it. His family is on the farm, so to keep him in town the sheriff agrees if he also patrols Wharton at night.

Well, on the evening of September 15th, 1917, a local outlaw Francisco Lopez got drunk and started shooting up the town. It was Pitman’s job to confront him and that's when things went sour.

Pitman found the drunk Lopez on Main Street, so the constable simply walked up to the outlaw and told him he was under arrest. He then told him to come along peacefully.

Now very angry, Lopez told Pitman that he wasn’t "Under anything!" And then, Lopez went for his gun.

Then Pitman fired at the exact same time as when Lopez fired his third shot. Yes, that's when Lopez screamed and dropped his weapon. Against all odds, Pitman’s bullet had struck the outlaw's pistol.

Pitman would later describe his experience as a constable and what took place that night when he wrote:

"I undertook to arrest one Francisco Lopez, a drunken Mexican and as I approached him he jumped from the sidewalk into the street and opened fire on me with a little 38 Cal. revolver and I returned the fire as quickly as I could, pull my single action 45 Colt my first shot being immediately after his 2nd and as luck would have it my first shot put his gun out of commission ½ of my bullet entering his cylinder and the other ½ hitting him in his left hand as it split and glanced off.

My second shot went through his right shoulder and the rest went wild just as the Mexican did. This all happened within 30 yards of the jail door and my wife hearing the shooting made a rush to the jail door with another 45 and my shot gun, an old reliable double barrel loaded with buck shot.

The hombre ran to within 20 yards of the jail door and hid behind a fence corner and when I got the guns from my wife I made a run in the direction of where I last saw him and the first flash of my lite hit him my [wife] followed there he is as She followed I raised the shotgun and then is when she really screamed “don’t shoot him”, and that scream from her is all that kept me from being tried for murder.

I approached him with both barrels cocked in his center and taken the pistol) , or made him hand it to me handle first, then took him into the jail and locked the door behind and the people from all parts of town came rushing into the jail yard. But the Mexican was already safe behind jail bars. Waiting for a doctor to come treat his wounds which soon got ok. Then he was carried before the county Judge who fined him $200.00 and one year in jail for carrying a pistol later he was tried in District Court for assault to murder, during which trial his large family of small children occupied the front seats in front of the Judges bench. The jury brought in a verdict of 5 years suspended sentence, the sentence being suspended through sympathy for the children."


With a muzzle velocity of roughly 900 feet per second, the big .45 bullet from Pitman's handgun hit the barrel of the assailant’s revolver. Half of the slug entered the chamber holding what would have been the bad guy's third shot. The other half of the slug tore into Lopez's hand which forced him to drop his gun. 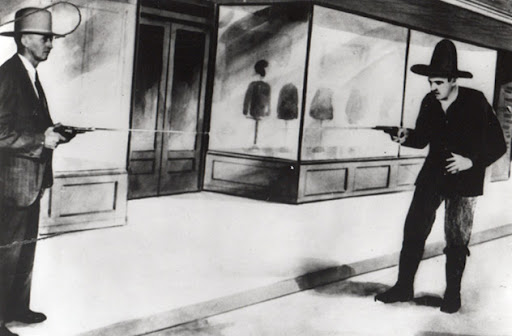 It is said that against all odds, Pitman's .45 bullet struck the .38 that Lopez was holding. And yes, it is believed that half of that lead slug had gone up the barrel of the outlaw's gun smashing into Lopez's next round. There is a bulge in the barrel where the bullets had collided with the other.

He was Wharton City Constable from 1916 to 1920, and Wharton City Marshal from 1920 to 1935. In the 1930s, Pitman read that Ripley’s Believe It or Not had a national contest under way to uncover astonishing facts for use in its syndicated newspaper column. So yes, the marshal wrote the story of his 1917 shootout and sent it to Ripley.
Pittman wrote:

Six weeks after sending it in, Pitman is called to tell him that out of some 5 million entries he had won first prize in Ripley’s contest. He won an all-expense-paid trip for two to New York and then Cuba.

Pitman took the soon-to-be-famous pistol to the Houston Post for verification. Then on June 23rd, 1932, newspapers across the nation told the story of Pitman’s incredible shot. It is said that in the depths of the Great Depression, Pitman and his wife left for Cuba on a two-week vacation of a lifetime. Vacations were of course something that was basically unheard of for regular people in those days. People at the time were out of work and to busy trying to put food on their table, vacations were something for the wealthy.

Later that same summer, Pitman and another Wharton officer had a confrontation with none other than the famous Bonnie Parker and Clyde Barrow. That took place when the two officers tried to stop their car, a stolen car, when someone inside the car opened fire as the driver did a speedy U-turn and escaped. Fortunate for them, neither officer was hit.

On November 9th, 1935, he suffered a massive heart attack at the age of 51. His family buried him in the Wharton cemetery two days later.

As for the famous pistol, the jammed pistol remains in the holdings of Ripley’s Believe It or Not. Yes, the .38 caliber pistol that belong to Lopez is on display in one of Ripley’s Odditoriums.

So there you have it, two of the most implausible shots in the Old West. One during the hey day of the Old West, and the other at the end of that period. And yes, since both shots kept their shooters alive, they certainly do have a lot in common.

At least that's how I see it.
Tom Correa