Texas Has A Feral Hog Problem 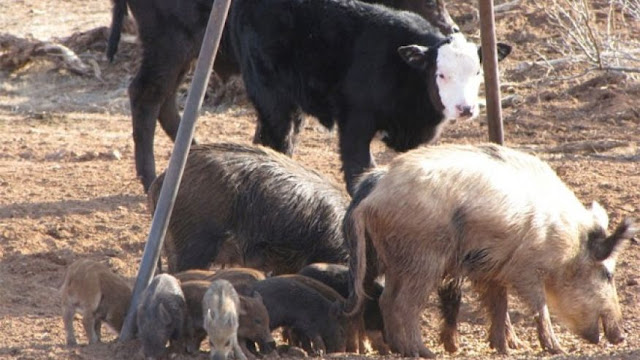 If I have my way about it, I may be going to Texas this Summer to shoot feral hogs. Texas has become the Feral Hog Capital and I would love to go down there and shot as many as my rifles can handle.

Why, you ask? Well, they are among the most destructive invasive species in the United States today. There are estimates that range from two million to six million of the beasts running free to wreak havoc in at least 39 states. And friends, half are said to be in Texas.

Hogs were first introduced to North America by Spanish settlers. The breed most commonly seen in Texas is a mixture of those hogs and Russian boars brought over more recently for sport hunting, according to the Texas Parks and Wildlife Department.

Some speculate the population boom is due to relatively recent cross-breeding in the wild. Feral hogs are much larger, meaner and wilier than their farm-raised hogs. The feral hogs, which are often referred to razorbacks or wild boar, have exploded across rural America in the last 20 years.

Destructive is putting it mildly! Friends, I have people writing to tell me about wild hogs tearing up recreational areas, terrorizing tourists, and even attacking the family dog. But worse than screwing up some recreational area, it's estimated that feral hogs cause about $500 Million in agriculture damages in Texas alone.

They do this by digging up fields, destroying pastures and crops, creating wallows and busting up fences. Besides destroying crops, they also pollute rivers and streams, and break farm machinery by digging ruts that damage tractors and other equipment. It is said that when not creating destruction, they are breeding.

An official stated that a sow can bear two litters per year, with each litter consisting of up to a dozen, so that means one hog can become 200 over the course of just two years. And yes, according officials, that means 70 percent of the hogs must be killed each year just to maintain current population levels. And yes, a report from a year or so ago said there are 2.6 million feral hogs running loose in Texas. They are even pushing other animals out of the area. So yes, that means Texas has a huge feral hog problem.

Texas allows hunters to kill feral hogs year-round without limits. And of course some folks capture them alive to take to slaughterhouses. For me, I would think food banks and kitchens to help the needy would love some that meat.

I have been told that thousands are shot each year. Some hunters, better shooters than me mind us, actually shot feral hogs from helicopters. And while I have heard some who have written to say that the goal is to control their growth, I say shot for eradication until someone says stop. And that, well that brings me to what's taking place right now.

On February 21st, Fox News reported that the Texas state agriculture commissioner Sid Miller said that he wants to poison the feral hogs by using a human blood-thinner that supposedly proves especially deadly in swine. He is quoted as saying, "They're so prolific, you can't hardly keep them in check. This is going to be the hog apocalypse, if you like: If you want them gone, this will get them gone."

And believe it or not, though it sounds like BS, the pesticide used is called "Kaput Feral Hog Lure." It will be bait laced with the human blood thinner "warfarin."

Let's be real up front and admit that the use of warfarin as a pesticide to control the feral hog population is significant because it gives agriculture producers and landowners in Texas a new weapon in the fight against feral hogs. And according to some experts familiar warfarin, they believe it's a logical choice for hog toxicant because it is effective in swine.

The manufacturer of the product, Scimetrics Ltd. Corp., has been manufacturing rodent management products for 15 years. Yes, warfarin has been used to kill rats and mice for a long time. Extensive testing of the effectiveness of warfarin on killing hogs has been conducted in Texas since 2008. The approval of warfarin for feral hog control is believed to be the culmination of several years of research in conjunction with the Texas Department of Agriculture.

So now how about other animals in the food chain? How much of a risk is there to livestock, horses, deer, and other animals?

Experts say that other wildlife populations and livestock require a much higher dosage level to potentially have an affect on them. But frankly, that doesn't make sense since I would think high doses are needed to kill hogs. And if that's so that that puts livestock and other wildlife at risk.

And while the folks at Texas A&M Agrilife Extension Service are supportive of the rule change and the use of warfarin for feral hog population control, they don't have anything to lose. Ranchers and farmers do if this "hog apocalypse" is an apocalypse felt by other animals as well.

Louisiana is considering the use of the same poison. But the FoxNews report siad that there is at least one state wildlife official who has gone on record to warn folks that the crumbs that a hog leaves behind could affect black bears and other animals.

While the state of Texas officials are downplaying the threat to other wildlife, some hunters in Texas disagree and say poison is not a viable option. Hunters in the state have collected more than 12,000 signatures in opposition of the use of this poison.
In an effort to reassure people that the use of the poison will be safe for wildlife and livestock, Commissioner Miller said that there is only a "minimal" threat to other animals. But, according to Mr. Miller, hunters will be able to see that the substance was consumed by a hog because the fat will be bright blue. Imagine that.

Eydin Hansen, the vice president of the Texas Hog Hunters Association is quoted as saying, "We don’t think poison is the way to go. If a hog is poisoned, do I want to feed it to my family? I can tell you, I don't."

Mr Hansen also mentioned the risks of another animal, like say a coyote, eating a dead carcass. His concern is about just how much of the whole ecosystem is effected by the decision to use poison.

By the way, last year it was reported that Caldwell County has become the Lone Star State's front line in the fight to curb the exploding population of feral hogs.
They have had a volunteer task force which has found success using a host of strategies including $5 tail bounties, helicopter hunts, and smartphone-controlled corrals.

In the two years since their volunteer task force was founded, the Caldwell County task force has helped kill or capture 10,000 of the hogs while providing a proven model of success for other counties dealing with the same problem.

The Caldwell County Feral Hog Task Force pays $5 for each feral hog tail it collects. Of all the methods employed, the $5 bounty for tails has been one of the most effective. Setting up a roadside table, he and his fellow volunteers have paid out thousands of dollars for the tails that prove there is one less wild hog in the area. Funding for the Caldwell County operation comes in part from state and county grants.

The hogs are shot by hunters, sometimes from aboard helicopters, and trapped along the waterways they travel. Reports state that others, including entire broods, are caught in giant pens that are closed remotely after the hogs are inside.

The tails can be turned in by hunters who kill the hogs or by farmers and ranchers, who buy and take them to market. Hunters, who face no restrictions on the number of hogs they kill, can get up to $300 each. Some report bagging hundreds per year.

"In the last two years, I've gotten out of the red and into the black," said Val Ramirez, a landowner and hog trapper in Caldwell County to FoxNews.com. "On average, the revenue from selling wild hogs runs between $13,000 and $18,000 a year."

In Caldwell County, the hogs travel along the San Marcos River and Plum Creek, leaving behind large amounts of fecal matter and polluting the waterways in the process. Mr. Ramirez sets up dozens of traps along the creek and on the land of other ranchers looking for help.

"They are just a nuisance. We are not going to get rid of them completely. Trapping will never get rid of all of them, but at least we can try to curtail them," he said.

So now, if that's working in Caldwell County, why not open up the rest of the state using the same tactics? Why not pay for more hunters and make it worth their while to kill as many as possible?


Mr. Ramirez was right. They are a nuisance. So why not have counties, where the hog problem is the greatest, pay a bounty for each tail that's brought in just as Caldwell County is doing? I've known hunters who hire out to farmers to shoot feral hogs. And frankly, it cost ranchers less to hire someone to shot the invasive hogs than it costs them in crop losses. And if the farmers and ranchers knew they will be reimbursed by the state for the money that they are expending, I believe they will be more willing to spend more to get the job done.

As for the suggestion of reimbursing farmers and ranchers who hire others to remove their hogs, why not? That reimbursement may motivate other Texas ag producers to do that same if they really knew that they have the backing of the state.

The money that those farmers and ranchers will make from out of state hunters may even be helpful to recoup loses as result of the hog damage. A lot of them have been hit very hard by crop and equipment damage.

Bringing in more hunters, both locally and from out of state may even help a local economy that's been hit the hardest. Dollars coming in for everything from hotel stays and restaurants to hunting ammo and fees can't hurt a local economy who is open to out of state hunters wanting to bag as many hogs as the good Lord will allow.
Since feral hogs cost the state's agriculture industry about $50 million a year in damage, why not go with using other options instead of using poison which can have an effect on livestock, other wildlife, and the people eating these hogs?

Fixes like poison scares me because there is no telling how it spreads in the food chain? Does it enter the water that hogs drink from? Does it effect scavengers? Does it effect other animals which may consume it and pass it along by various?

And really what happens if someone doesn't know what he's looking at? Or what if some hunters decide to ignore what they see and eat these animals? What then? Who is responsible if people get sick or the poison is transmitted to people? Sound far fetched? Really?

I find it interesting that people are concerned about not letting folks eat meat or chicken with growth hormones and antibiotics, yet someone is OK with Texans eating hogs which have been poisoned?

I find that unacceptable behavior on the part of public officials.