The Coach Gun -- The Town Tamer

A while ago I made the claim that I believe shotguns were the real guns that won the West. Now a reader wants to know why I think such a thing? So here goes.

Shotguns were popular long before the Henry rifle, the Winchester 1873, the Smith & Wesson American, or the Colt Single Action Army. And yes, they were a huge number of shotguns that came West by pioneers. Whether it was someone's grandfather's percussion or other muzzle-loader shotgun, or a single or a double-barrel, our pioneers brought them with them.

Pioneers who could only afford one firearm bought the one gun that was a more versatile tool than that of a pistol or a rifle. With a shotgun, a pioneer could bring in small game like rabbits and ducks while also loading up with buckshot to take down a deer. Produced by the thousands, they were used more than any other type of firearm.

They were used by lawmen, the military, shotgun messengers, prison guards, and average Americans alike. They were, as they still are, the single best most economical firearm for hunting and defense. 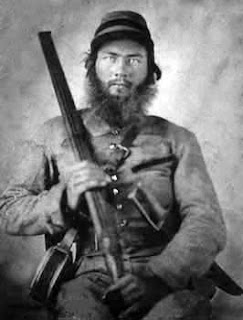 Of course, shotguns were used by Americans as far back as during the Revolutionary War and the War of 1812. And yes, there is the story that a shotgun was actually found at the Alamo. It was found after Santa Anna’s forces overran those holding the garrison.

As for the Civil War? Yes, both sides had troops that used shotguns. Cavalry units on both sides used shotguns as a devastating close-quarters weapon. And really, that really makes sense since the cavalry was used as shock-troops during the time. And yes, it was much easier for someone atop a horse to hit another what they were shooting at with a shotgun than it was with a rifle or a pistol.

In the Old West. the side-by-side double-barreled shotgun was a mainstay to settlers, miners, ranchers, and just about anyone who needed a weapon. They were primarily made by Remington Arms, Ithaca, Colt's Manufacturing Company, Parker, L.C. Smith, and also British and Belgian makers.

The term "coach gun" comes from express companies, like Wells Fargo & Co, who knew the value of shotguns. They armed their guards with shotguns that would become known as "coach guns" and "messenger's guns" because of their use by shotgun messengers on stagecoaches and by messenger wagons back in the Old West.

Since a "coach gun" is simply a side-by-side double-barrel shotgun with a barrel from 18 to 24 inches in length, such a shotgun was used by shotgun guards on gold shipments on stagecoaches. They sat next to the driver on the coach, thus the name "coach gun."

And while most were 12 gauge guns, there are reports that some were 10 gauge shotguns. Frankly, having a guard use a 10 gauge is a little hard to believe since a 10 gauge can be a little tough to handle.

The term "messenger's gun" is believed to have been coined in the late 1850s when Wells Fargo assigned guards to its shipments on stagecoaches in California. The company issued shotguns to their guards so that they would be able to defend their gold shipments coming out of the California Gold Country. Those Wells Fargo guards were called "shotgun messengers."

Wells, Fargo & Co. began regular stagecoach service from Tipton, Missouri to San Francisco, California which was a 2800 miles long route. In addition to carrying passengers and gold shipments, Wells Fargo was contracted to carry U.S. Mail. The reason for the armed guards is that the threat of road agents, highwaymen, ready, and willing to rob stages was always present. In fact, it is said that between 1870 and 1884, Wells Fargo stages were the target of 347 robbery attempts.

Wells Fargo and other express companies recognized the need for firepower. They also understood the psychological effect of such an imposing weapon. With that, they hoped that those facts alone would deter someone from robbing a shipment.

And yes, it is believed that in some cases, the sight of a shotgun guard, or guards depending on the size of the shipment, may have changed the mind of the most determined road agent. This is probably true since the devastating effect of a shotgun was common knowledge to all at the time. No, there was no doubt of the effectiveness of a scattered blast of shotgun shot.

Now if you are wondering why they didn't arm their guards with rifles or pistols? Most guards did in fact carry a pistol, and some did supplement a shipment with a supply of rifles, but express companies and shippers opted for the shotgun. Shotguns were simply more effective than trying to hit something with a single projectile fired from a rifle in the hands of someone atop a moving stagecoach or other types of wagons.

Let's face it, not everyone is accurate with a rifle. In contrast, those armed with shotguns didn't have to be expert marksman since a shot blast is very forgiving. And that, well that's the same reason why other industries like say mining companies used coach guns for their guards.


Famous American gunmaker and inventor John Browning, while working for Winchester Firearms, revolutionized shotgun design when he introduced the Model 1887 Lever Action Repeating Shotgun in 1887. The lever-action loaded a fresh shell by the operation of the lever really no different than a lever-action rifle. Browning then introduced a Pump Action Shotgun in 1893. The 1893 had a very short-lived production due to mechanical problems and reliability.

Though available in lever action and pump actions, Wells Fargo kept using side-by-side double-barrel shotguns because they believed there were too many reliability problems associated with both the new lever-action and pump-action designs. They saw, as many still do today, that a side-by-side coach gun is simply more reliable when one needs it.


Before the Model 1887 Lever Action Repeating Shotgun and the Model 1893 Pump Action Shotgun, most shotguns were the "break open" type. Both the earlier side-by-side double-barrel shotguns and the later lever action and pump action guns, could all have been ordered from the factory with the specified barrel length that one wanted. Of course, gunsmiths would cut down the barrels.

So now, it's a safe bet that you're asking what's the difference between a "coach gun" and a "sawed-off shotgun"? Well, frankly, I always thought they were one and the same. But doing the research for this article, I found out that I'm wrong.

A sawed-off shotgun by law is a type of shotgun that is legally unacceptable because it has a barrel under 18 inches in length. Compared to a standard shotgun, or even a coach gun, a sawed-off shotgun has the shortest effective range. But even though that's the case, its reduced size makes it easier to maneuver and conceal.


Why use a Coach Gun? 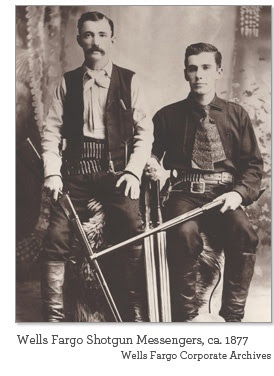 As for the question, why use a short barrel shotgun? The simplest answer is that the short barrel design simply makes the weapon easy to maneuver when needed.

Yes, it's the same as with the mythical Colt Buntline Special. While I don't believe it ever existed, I also believe that if it did it would have been completely impractical because of its barrel length. That's especially true for lawmen because of their need to have weapons that are practical in close-quarters use.

Even the standard 7.5" barrel of the 1873 Colt Single Action Army was considered too long by most lawmen in the 1800s.

That's why, by the 1870s, lawmen were either ordering them with shorter barrels or simply having a local gunsmith cut a few inches off their barrels. It was all about getting a weapon into play faster and being able to maneuver that weapon faster in a gunfight.

For a shotgun messenger, the same principle applies. You would want a shotgun that can be handled fairly quickly. When using a lever-action rifle, one's aim matters more than when using a short-barreled shotgun with a wide shot pattern. While one's proficiency is always important with any firearm, with a coach gun one also has less of a chance of missing -- especially at close range.

It is also important to note that in times of civil unrest and lawlessness, lawmen considered the shotgun, which in most cases was a coach gun, a "town tamer." While lawmen certainly appreciated the firepower, they also appreciated the psychological effect of having a shotgun in one's hands when facing an unruly crowd.

So yes, lawmen and guards know there were benefits of using a shotgun. If one were using a coach gun as a member of a posse, then one was pretty much assured of getting a great deal of respect from those you're after. And of course, if one happens to have to the business end of one lined up on a badman, its wide pattern can help out a great deal to get your man in a bad situation where nerves are not always as steady as can be.

As for outlaws and gunmen in the Old West who used shotguns or were the victims of shotguns? Yes, there was the occasional gunfighter who saw the benefits of using a shotgun. There were also those who met their end as a result of tangling with someone willing to use one. 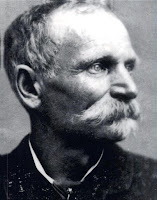 For example, the famous California highwayman Black Bart was said to use a short-barreled shotgun when he robbed stages in the Gold Country. He was known to tell the driver and shotgun messenger that guns were pointed at them from nearby bushes. Later the stagehands found out that those so-called rifles in the bushes were only sticks that were positioned to look like rifle barrels.

Then there is a question out there regarding the shotgun that Tombstone City Marshal Virgil Earp got from the express office just before the gunfight near the OK Corral. While I believe it was a 12 gauge coach gun loaded with buckshot, some say it was a 10 gauge.

Yes, I'm talking about the same shotgun that Virgil Earp handed to Doc Holliday. It was the gun that Virgil told Holliday to put under his coat so that the public would not see it and become alarmed. It was the same coach gun that Holliday used to shoot Tom McLaury at point-blank range in the chest. Yes, Tom McLaury stood just a few feet from the business end of Holliday's shotgun when he was cut down. 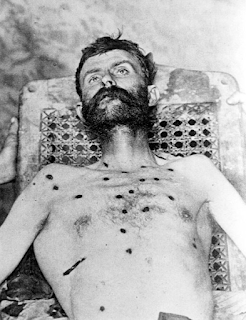 As far as the most famous picture of a dead outlaw who was shot with a coach gun? Well, I believe that distinction goes to none other than the outlaw Bill Doolin.

On August 24th, 1896, Bill Doolin who ran a gang known as the original "Wild Bunch" in the Oklahoma Indian Territory was ambushed and killed by Deputy U.S. Marshal Heck Thomas's posse.

Doolin was killed instantly when Deputy U.S. Marshal Heck Thomas opened-up on him with both barrels of buckshot from his shotgun. One can see the devastating effect it had,  and actually, count the number of shots that hit him.

As horrible that it was, such was an outlaw's death.

And lastly, this is out of a Corralitos, California, newspaper November 1879:

"Isaac Rich was discharged last Saturday. It was not proven that he intended to commit bodily harm on the workmen of the Corralitos Water Co. He only used the shotgun as a silent persuader. As the shotgun said nothing, and could not be made to testify, Rich and the shotgun were discharged."